Friday June 21 marked the conclusion of the 10th meeting of ITMO’s International Council, the hub of the University’s strategic framework working to help enhance its competitive performance as a leading higher education institution with an international outlook. The prominent experts forming part of the Council assembled in St. Petersburg to discuss this meeting’s topic “Entrepreneurship and Tech Transfer”. 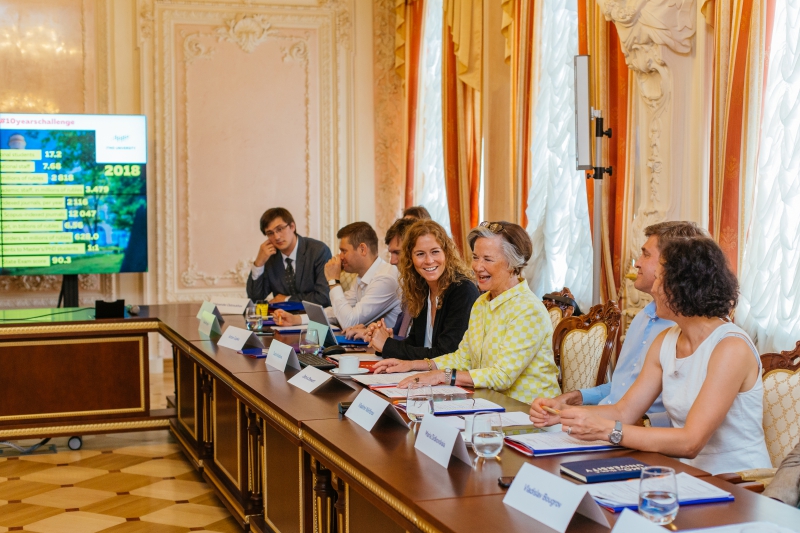 ITMO’s International Council is a strategic body created in 2014 with the aim of providing the University with high-level guidance on all aspects related to increasing its competitive position alongside the world’s most established higher education institutions. Comprising the Council are leading international experts who meet twice a year to review and advance ITMO’s progress over a wide range of key aspects forming the global educational, scientific and entrepreneurial agenda of today.

Taking up the mantle from the previous meeting held in November of 2018 in Amsterdam, the Netherlands, this gathering welcomed a new member into the Council’s world-class ranks. Dr. Christoph Badelt is a leading economist specializing on social policy who currently serves as Director of the Austrian Institute of Economic Research and Professor at the Vienna University of Economics and Business, of which he is also a former Rector.

“It’s extremely interesting to compare different views from various countries on issues that are of key importance for the University,” shared Dr. Christoph Badelt about his International Council experience.

The first day of the meeting, June 20, began with a welcome from ITMO University Rector Vladimir Vasilyev. This was followed by a moderated discussion featuring International Council members, ITMO staff and students. Drawing on the results of a comprehensive student survey, the discussion touched on a wide range of aspects, from different perceptions of a “quality education” by students and university staff to the changing role of a professor, the ideal balance between online and in-class education and soft and hard skills, and factors that define a country’s development.

One interesting conclusion among many focused on the importance of practice-oriented, well-organized education that strives to prepare students for a disorganized world, ensuring their continuous satisfaction with the process to maintain their interest and motivation throughout. The participants highlighted that modern professors should take on the role of mentors who, in the words of the Council expert Andrew Comrie, “make the light bulb go on”, helping students understand and unleash their full potential.

Among other topics discussed were “Evaluating students’ progress: beyond competencies” and “One university, two campuses”. For the former, the International Council Chair Dr. Debra Stewart emphasized that development is all about ongoing feedback and assessment which should harness technological progress to allow students to track their progress towards mastery online. The participants stressed the value of feedback over grading, positing that it is the former and not the latter that is most conducive to successful learning, and discussed the crucial role of soft skills in the modern world. As for the topic of ensuring the holistic connection of ITMO’s new Highpark campus with the University’s buildings in the city, the participants of the discussion proposed that efforts to seamlessly bind the campus network together should include a diverse range of measures from visual connectivity (for example, live broadcasts of lectures held at different campuses) to transport solutions such as launching regular shuttle buses between the different locations.

Dynamic and inclusive, the discussion was followed by a visit to the Department of Contemporary Art of the State Hermitage Museum, where the International Council members attended an exhibition "Artificial Intelligence and Cultural Dialog". A perfect representation of Art & Science in action, the exhibition was made all the more special because it was organized by Dimitri Ozerkov, who combines his duties as Director of the Contemporary Art Department with serving as Head of ITMO University’s innovative Art&Science Master’s program. Recognized leaders in their respective spheres of activity, the University and the Museum have developed a close collaboration in this visionary field at the intersection of art and science.

A special guest of the 10th ITMO University’s International Council meeting was Dr. Martin Hinoul, Business Development Manager for the Knowledge Region of Leuven, an initiative based at KU Leuven (Catholic University of Leuven) Research and Development, one of the first technology transfer offices in Europe. An accomplished author, researcher, practitioner and internationally recognized expert in the field of entrepreneurship, Dr. Hinoul made a valuable contribution to the discussion with his specialist take on the successes, challenges and potential of entrepreneurship in Russia.

This topic was further explored by Olesya Baranyuk, Deputy Director of ITMO University Technopark. In her presentation titled “Entrepreneurship at ITMO: The Big Picture,” the expert tracked the development of ITMO’s entrepreneurship infrastructure, gave the members a first-hand insight into the operation of the University’s entrepreneurial ecosystem as it stands today, discussed its global reach and key results, and put forward an evaluation of its objectives and prospects for the future.

The keynote of ITMO’s entrepreneurial ecosystem continued to reign supreme throughout the second part of the meeting. Anton Gopka, Dean of Faculty of Technological Management and Innovations, provided the members with an overview of leadership and entrepreneurship education at the University, following up with a presentation on the University’s Technology Transfer Office, in which he was joined by the Head of Corporate Center Alexander Ostroukhov. Member of ITMO Entrepreneurship Center Alexey Solomatin concluded with a rundown on acceleration programs and mentoring support available at the University.

The next meeting of ITMO’s International Council will take place at one of the University’s partner universities in Europe in November of this year.