Meet Lasse Schneider, a German PhD student in Management of Social and Economic Systems. He came for an exchange semester, but fell in love with the city and the university – now he is finishing his first year of PhD studies. At the same time he writes for ITMO’s blog. Find out more about his incredible story in this interview. 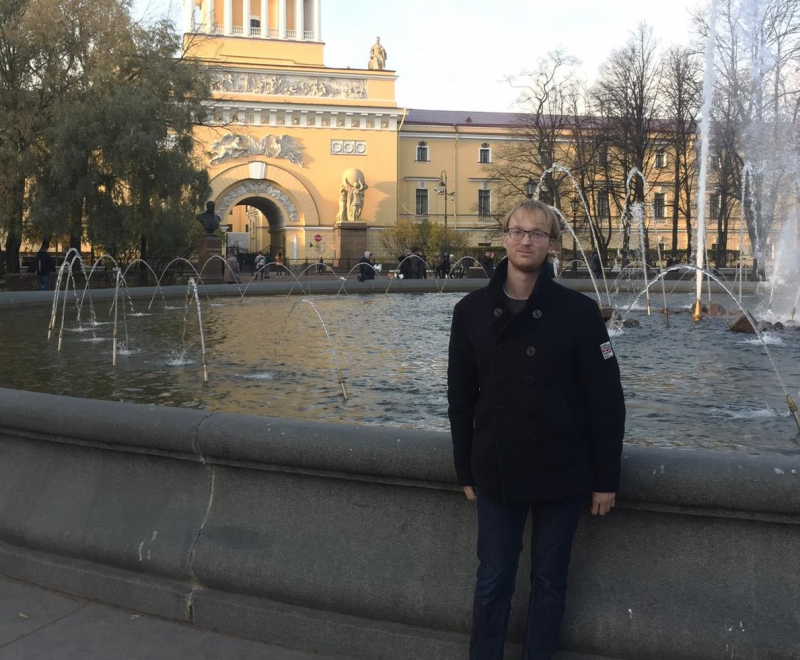 What are you studying at ITMO University?

I’m studying for a PhD in Management of Social and Economic Systems. The focus of a PhD is obviously scientific work. And your specialization only indicates the  area where you do your research. Since my supervisor works at the Institute of Design and Urban Studies, my focus is on the management of the economic and social systems in urban areas. The main content of my work is theoretical and applied research of systemic connections and patterns of operation, development of objects and processes in the economy and society, taking into account the specific characteristics of the industry, but also the human factor.

While I was completing my  Master's degree in Urban Studies at the Free University of Brussels (VUB) I met three ITMO exchange students. When later I had the opportunity to do an exchange or internship as part of my Master's degree, I decided that I wanted to do it in Russia. As my Master’s project  was very focused on the situation within the EU, I thought it would be interesting to see the Russian perspective on urban problems and challenges. The three Russian exchange students told me that ITMO is a good university and one of the few universities in Russia that has an Urban Studies program, so I decided that I wanted to go to ITMO. It was also helpful that I already knew some people in Russia.

During the exchange semester in St. Petersburg, I fell in love with the city and extended my exchange for one more semester than was possible since I only had to write my thesis to finish my Master's degree. As I wanted to get a PhD anyway, I decided to do it at ITMO since I liked the environment of the university and I had already found a professor who was willing to supervise my thesis.

Are you on a scholarship or are you a fee-paying student?

Fortunately, I’m a scholarship student. During the internship, I went to the PhD office at ITMO and asked them about the funding possibilities. They advised me to apply for a Russian government scholarship for international students. The application was not that difficult. I simply had to fill out an online form on the official website of the Rossotrudnichestvo government agency and upload some documents.

Since I was in Russia, I was able to receive some of the documents in Russian, so there was no need to translate them. Other documents like my passport and my Brussels title had to be translated. A few weeks after applying, I received the message that I had won the scholarship to cover my tuition and a few months later ITMO accepted me.

Before I came to Russia, I was a bit nervous because I was not sure what to expect. You hear a lot of negative things about the country (sanctions, unfriendly people, cold weather) and I did not speak Russian. So I was asking myself if it really was such a good idea to go on exchange to Russia.

However, with time I adapted to day-to-day life and started to feel comfortable in the city. Moreover, I also found that a lot of the scary stories that you hear about Russia are not true. For example, while the weather was indeed cold, it was not unbearable. But maybe this is because in Germany it is also cold in the winter (even though not as cold as in Russia) so I am used to cold weather and snow.

How did you learn Russian? What tips do you recommend to improve the language level?

I learned the Russian language in my exchange classes, where I learned the basic concepts and before entering the PhD program  I did a year at the Foundation Program at ITMO that helped me significantly improve my Russian.

My recommendation to improve your language proficiency  is to first consider spending a year at the Foundation Program. Not only will it help you learn Russian, but you will also have a year to see if you really like Russia and want to study here. If you are already in Russia, it may be a good idea to find a Russian person who wants to improve their English or even your mother tongue through an application like Tandem. Then you can practice Russian and the other person can practice another language, this way you will get your  practice and there will be mutual help.

The city is very beautiful and it also has a lot to offer in terms of culture. And if you know people, they are very friendly and always ready to help. Also, if you go out of the city, there is very beautiful nature, for example, in Karelia.

How is life as an international student?

Life as an international student can sometimes be difficult because you need to be independent. Since when you study in your home country it is easy to ask your parents for help and it is even possible to continue living at home. But when you study abroad you need to organize a lot of things on your own. But being an international student is obviously also very interesting.

After adjusting to life in Russia, finding your way around the environment at university is not that difficult. Sometimes classmates are very interested in you as an international student and your (German) perspective on certain topics.

My hobbies are reading and cycling. The last one is a bit difficult in St. Petersburg. But there are areas of the city where you can pedal comfortably. I also like to travel a lot.

I volunteer at the DRB (the German-Russian Center). The DRB offers German courses and hosts events related to Germany or German history and language in St. Petersburg. For example, once a month we have a speaking club where we talk about a certain topic in German. In addition, I also write articles for ITMO’s blog.

Do you have any research going on? Can you tell us a bit about it?

Since I'm currently in Germany waiting for a new visa I first hope that I can return to St. Petersburg this autumn without any problems. Besides this, I expect that I can continue my research and hopefully at the end of the program I will produce a good thesis. During this year, I hope to further improve my Russian and get more experience in scientific work.

I would recommend studying in Russia and at ITMO as it will be a once-in-a-lifetime experience. However, you really need to be willing and prepared if you want to undertake your studies here. For example, regardless of whether your program is taught in Russian or English, you need to learn Russian. Which obviously requires a lot of effort. Also, you must be willing to adapt to different cultures and mindsets.