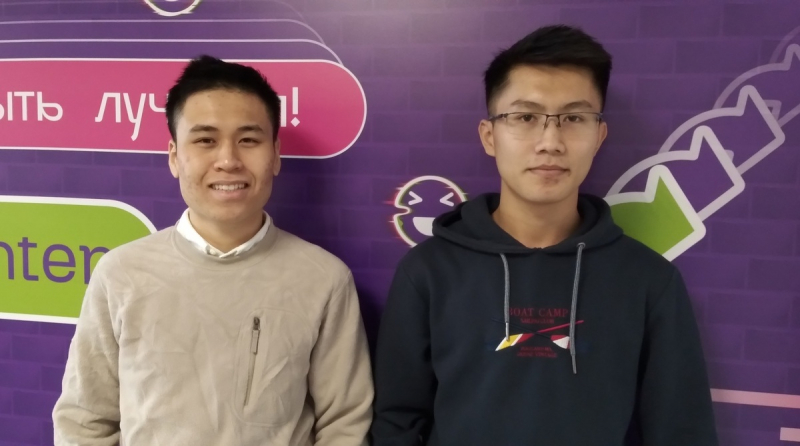 What are you studying and how long have you been in St. Petersburg?

Minh: I am a second-year Bachelor’s student in Robotics and Artificial Intelligence at ITMO. My major is automation.

Long: I am a third-year Bachelor’s student in System and Applied Software at ITMO and I am majoring in software engineering.

How does it feel to be a part of such a huge community of Vietnamese students at ITMO?

Long: It is an advantage to have a big community of students here. At times when we miss our families, we come together and help each other overcome homesickness. Sometimes, when we crave our traditional food, we cook it together. However, the disadvantage is that we always stick together and communicate in our native language. That has an impact on the amount of practice we get speaking Russian or English.

Minh: Having a big community also helps us endure the hardships of living in a foreign country. For instance, whenever I have a problem with an assignment, I have people to help me out. I know I can always count on them. Communicating with your own people is always easier.

How would you describe your country?

Minh: It is a small but beautiful country with spectacular landscapes. My country has a rich history and we take pride in it. We also have a lot of festivals like the Tet festival (Vietnamese New Year) and the Mid-Autumn festival.

Long: In a nutshell, Vietnam is a country with a rich cultural heritage. It is considered to be one of the fastest developing countries in the world.

What does the flag of Vietnam signify?

Long: The points of the star on the flag represent the five main classes of Vietnamese society: the farmers, the workers, the traders, the scholars, and the soldiers. The red background symbolizes the blood of the soldiers who gave their lives for the freedom of Vietnam and the yellow color of the star indicates the skin color of Vietnamese people.

Minh: The flag also symbolizes the sacrifices made by our ancestors in a quest to make Vietnam free from French colonizers. From our childhood, we are taught to treat the flag with much respect and honor, especially for our ancestors who sacrificed their lives for our freedom.

What are some of the most popular Vietnamese dishes available in St. Petersburg?

Minh: One of the most famous dishes of Vietnam that are available here is Pho which is a noodle soup made of pork or beef. When former American president Barack Obama visited Vietnam, he tried Pho and really praised it. Several restaurants in St. Petersburg serve Pho but they are not as good as the authentic ones available in Vietnam.

Long: Another very popular and staple dish of Vietnam is called Bun cha. It is a delicious appetizer made of caramelized pork meatballs. In Vietnam, it is sold in restaurants and on the streets. It is a must-try if you visit our country.

Which are more typical in Vietnam: nuclear or joint families?

Long: It usually depends on where you live. In cities, you will find more nuclear families, usually with three or four members. But in the countryside, you will find more joint families where there are many people, sometimes three to four generations,  living under the same roof.

Minh: Joint families are traditional in Vietnam, but slowly with Western influence on our society, nuclear families are growing in number.

What are some of the major tourist attractions in your country?

Long: Some of the best places to visit in Vietnam are Ha Long Bay and Nha Trang. Nha Trang is a very beautiful beach with very white sand. The coast is lined with coconut trees and the water is warm. It is the perfect place to relax and swim. Russians would love this place especially during the winter. It is so beautiful that it is often referred to as Paradise on Earth. Ha Long Bay is also extremely picturesque. The name Ha Long means a descending dragon. People visit this place for scuba diving, rock climbing, and hiking, particularly in the mountainous Cát Bà National Park.

Minh: Another very interesting tourist spot is the Phong Nha cave, a UNESCO world heritage site. It was discovered in 2009 and was opened for tourists in 2014. It is the biggest cave system in the world with 10 massive caves. It is so big that a skyscraper from Manhattan could easily fit in it!

What are the major festivals of Vietnam?

Long: One of the main festivals in the country is the Tet festival (celebrated in the month of February), which is the Vietnamese New Year. It is celebrated with lots of pomp and show. The celebrations begin almost a week before New Year’s Day. Families come together to celebrate this festival. We exchange gifts with one another and wish each other good luck for the upcoming year.

Minh: On New Year’s day, my parents and my grandparents give me and my siblings some money enclosed in a red envelope. We call it lucky money. It is a token of love and blessing from the elders. Other important festivals in our country include the Mid-Autumn festival that celebrates the end of the autumn harvest and Vietnamese Women’s Day that pays tribute to the hard-working women of our country.

What is the significance of Vietnamese Women’s Day and what was your experience of celebrating it at ITMO?

Long: In 1930, the Vietnamese Women’s Union was founded on October 20 to represent and defend the legal rights of women in Vietnam. Since then, this day is celebrated as Vietnamese Women’s Day. Although it is not a public holiday, every household celebrates this day with much love and compassion. I really enjoyed the celebration at ITMO. It was well organized. I supported the organizing team with logistics. I hope it continues every year.

Minh: On this day, the males usually give presents and flower bouquets to their sisters, girlfriends, wives, or mothers. Generally, a party is organized in the evening where the males of the family prepare dinner. For men like me who cannot cook, dining out at a restaurant is the way to go. I had a great time celebrating it at ITMO. There were lots of activities like dancing, singing, and acting. I played a character in a comic sketch. It was a very enjoyable day indeed.

Long: After I complete my Bachelor’s, I would like to go back to my country. I really miss my family. I haven't seen them in three years. I would also like to get a job in Vietnam. I might go for a Master’s degree but I am not sure at the moment. My ultimate dream is to study abroad, gain experience, and then go back to my country to work. I want to do something good for my country’s development.

Minh: I am still a long way from the finish line. I would definitely like to study further but I am not sure how life will unfold in the years to come. Only time will tell. I might even decide to stay in Russia forever! Let’s not think about it yet because it is too early. As they say in Vietnam, Don’t count the chickens before they hatch!