Every year thousands of international students are admitted to various universities in Russia. What makes Russia such a popular student destination? Is it the charisma of the country or the innovative approach of its institutions? Let’s find out from Mehmet, an international student from Turkey. 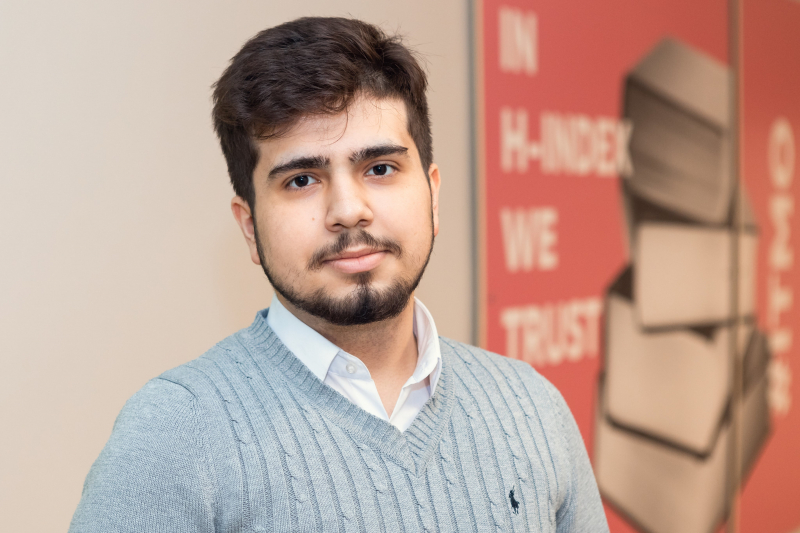 I am studying Russian language and culture at ITMO’s Foundation Program. After its completion, I will do my Bachelor’s degree in biotechnology.

During my studies in Turkey and Germany, I performed best in biology. It was my favorite subject. Concepts like genetics and molecular cloning impressed me a lot. I want to explore these techniques further during my Bachelor’s.

How did you manage to study both in Turkey and Germany?

I joined a German school as part of an exchange program in my final year of high school, after which I decided to join ITMO for a Bachelor’s degree. I came to St. Petersburg directly from Germany.

What was your experience of studying in Germany like?

It was nice. Studying abroad is always full of new experiences. I learned to communicate in German. The education system there is quite different. I made many international friends.

How many languages can you speak?

My native language is Turkish. I am fluent in German and English and I am learning Russian. I would love to add it to my tally soon, but for now, I am a beginner.

Why did you decide to study in Russia when Germany is a popular destination for higher education?

It is true that German education is very scientific and innovation-driven. But I wanted to explore a new country. I found out that Russia is equally innovative, especially in biotechnology and informatics. When I learned about ITMO and its biotechnology program, I was really impressed. Its QS ranking is also great. I am proud to be a student at ITMO.

Was it difficult for you to get into ITMO?

It was not very difficult. I applied for a Russian government scholarship. I had to take an exam which I managed to pass with good grades. As a result, I got direct admission to ITMO on a full scholarship.

Why did you decide to enroll in the Foundation Program?

The language of instruction for my Bachelor’s program is Russian. Therefore, it is important to learn the language. The goal of the Foundation Program is to prepare us for the next four years. I am really enjoying these classes. The teachers are doing a great job teaching us Russian. I am making good progress. I hope to learn a lot of Russian in the coming months.

What do you like the most about the Russian education system?

I like the fact that the staff are very supportive. I’ve found that Russian universities always stand beside their students. They help students grow and become the best version of themselves. For instance, I won a scholarship to study in Russia even when I don’t know the local language. My knowledge of core subjects like biology was tested along with my other skills. In Russia, your intent to be successful is valued the most.

Have you visited ITMO’s biotech labs?

Yes, I paid them a visit. They are world-class and stocked with modern equipment. I have heard that ITMO also has its own food processing lab where students bake their own bread. I am excited to further explore this lab in particular.

Is biotechnology a boon or a bane?

Just like any other field of science, biotechnology can be considered a bit of both. It really depends on how we use it. If used for a good purpose, biotechnology can improve healthcare and save lives. At the same time, misuse of this technology can cause major setbacks and pose a fatal threat to the existence of life on Earth.

How are you feeling in St. Petersburg?

I am really happy to be here. I am getting along very well. The city is extremely beautiful. I won’t even try to explain it as words won’t do justice. The people here are very friendly and amiable. This place is starting to grow on me!

Where do you live?

For now, I am living in a dormitory located on Vyazemsky Lane. But I would love to move to an apartment, probably next year.

What do you think about your dormitory?

It is a good place. Dormitories are not meant to be great places to live but ITMO’s dormitories are much better. It is not as good as living in your own apartment but it is not bad either. It is clean, cozy, and equipped with almost every modern amenity.

Do you prefer cooking or eating out?

It depends on several factors like time, energy, workload, etc. I enjoy cooking, especially Turkish dishes. But such preparations take a lot of time and effort. As a result, I often end up ordering online.

Do you have a favorite Russian dish ?

I like Manti but it is also a Turkish dish. Luckily, it is available in St. Petersburg. It is a delicious dish made of small lamb-stuffed dumplings topped with different sauces. It is absolutely mouthwatering!

Are you enjoying the winter in St. Petersburg?

I come from a city called Malatya located on the east coast of Turkey. It has four seasons and the temperature falls down to -5 degrees Celsius during winter. So, I had some experience of living in sub-zero temperatures. But winter in St. Petersburg is way more harsh. The lowest temperature was around -23 degrees Celsius! To be honest, I cannot say that I enjoyed it but I could survive it okay.

How did you celebrate New Year?

I spent it with a friend of mine who is also from Turkey. We visited the locations that had huge Christmas trees and mesmerizing decorations. We also played Turkish board games like tavla. Overall, we had a fun time together.