How does lighting design help reflect natural occurrences in the urban environment and make the latter more accommodating for people? Beata Kublik and Paulina Dudkiewicz, Master’s students from Aalborg University (Denmark), are currently doing an internship at ITMO University’s Higher School of Lighting Design. The two students are developing a new lighting design model for one of St. Petersburg’s public parks using a nature-oriented approach. They believe that the value of light as an architectural tool will only increase wherever people haven’t yet realized its importance. 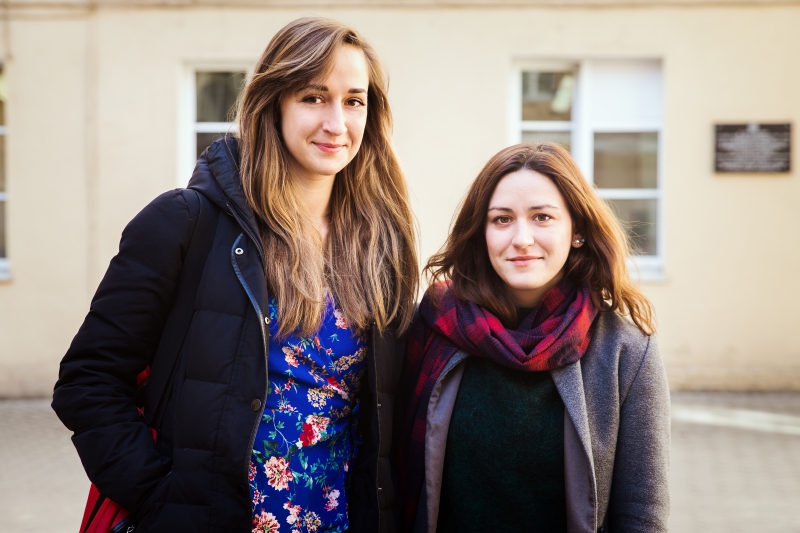 How did you find yourself at ITMO University? What is your current project here?

Beata: At our home university, students present their projects at special event open to everyone. Paulina, two more students and I were there with a project when we were noticed by representatives of ITMO University, who invited us to do an internship in Russia.

Paulina: The project we presented in Copenhagen focused on adding a naturalistic feeling to the urban environment using lighting design to help people relax and feel in touch with nature. We were inspired by drops of water that create ripples as they fall onto a surface. This idea feels at home in St. Petersburg, as it’s also a city built on water. Of course, we didn’t just “copy-and-paste” out project; we conducted a new survey of the areas where people might choose to observe nature and rest after work. Lighting design, after all, depends largely on the context.

What exactly do you mean by using the image of water in lighting design? Does that translate into some specific lighting effects?

Paulina: Water carries with it a special symbolic meaning: it’s dynamic, moving. When working  on our previous project, we learned about the term biophilia. It refers to the human tendency to interact with other living things, with nature. We wanted to emphasize the things that are natural, that will help people cherish nature more. Biophilia isn’t a new concept, but it’s becoming popular today. The necessary lighting effects can be achieved using various devices, materials, and shapes.

What makes this project different from what you did in Denmark?

Paulina: The project we did back home concerned the areas of the city that are still being designed. However, here, in St. Petersburg, we’re creating lighting design for an actual place that already has some specific features. We were given a list of spaces that are slated for renovation this year, and chose the San-Galli Garden on Ligovsky Prospekt.

Beata: We picked it because it’s located in the historical part of the city, where parks and gardens are few and far between. It’s like an island of green surrounded by a concrete sea, which makes our idea of bringing it closer to nature even more relevant. Even more so since it only has outdoor lighting.

Paulina: We’ll only work on the project for some time; after all, implementing a lighting design project tends to take a while. But we’re convinced that our work will be in good hands. We’ve been told that the project will be submitted for consideration to the organization in charge of lighting in the city (San-Galli Garden will undergo renovations in 2018; the state utility enterprise Lensvet will consider Beata and Pauline’s design – Ed.) It feels nice to know that our ideas might become a reality.

How did you study the specifics of the San-Galli Garden?

Pauline: We took an anthropological approach; first, we came to the garden, sat down on a bench and just observed how the visitors behaved there. Being a lighting designer is about more than just understanding light; it’s also about knowing what sort of lighting the people need, how they use the space they’re in. For that reason, we also polled the people there. We asked what they thought of the garden and how often they’d go there. For many of them, it’s the garden closest to their home, somewhere they go every day to spend their time or walk their dogs. There are also many in-transit passers-by there, as the garden provides a quick route between two different blocks. It’s a pretty and small space, but it has many purposes.

Did you talk to the locals in English?

Beata: That wasn’t always possible, but we went there with Russian students who would help us translate.

Paulina: All in all, not knowing the local language when you’re conducting a poll is an issue. Most of the people in the city don’t know English. I hope that this’ll change, in both ways: perhaps more people will start learning Russian, because it’s a beautiful language. It was really great that our Russian colleagues were willing to help us, because we also had to scour the Russian internet for information on the technical and conceptual aspects of existing design projects that dealt with light, water, other effects. We also had a supervisor who would help us communicate with professors and organize our work.

What can you say about the lighting concept in St. Petersburg? Many lighting designers say that we’ve got too much light.

Beata: I, personally, think that it’s important to show the contrast between light and shadow: some buildings can be illuminated more, some less. It helps show off certain buildings and some of the particularly interesting architectural elements. Of course, you’d have to develop a specific concept for each specific street.

Paulina: I’ll agree that there’s too much light in the city. Take the Sennaya Square, for instance – it’s all very bright. That’s why there has to be a general lighting plan for the entire city. But even then you can’t just make a once-and-for-all decision. Maybe someone builds a hotel and wants the building to stand out, to have a specific lighting design.

Do you attend any lectures at ITMO University? What can you say about the education here?

Beata: We don’t, since all the lectures are in Russian; we were, however, given a presentation on how the university educates its lighting design students. I can say that the general approach is very similar to the one that’s used at my home university. The difference is that students at ITMO University tend to work on individual projects; in Denmark, we’re more partial to group work.

Paulina: I can add that you can feel an energy here: everyone is always eager to take part in some project or competition; people care, they want to develop partnerships with other universities and companies. There’s also a very friendly atmosphere here at the university, and there’s always someone who’ll help you out.

Does your Master’s program in Denmark have specialized tracks?

Beata: No, it’s a rather general course with a slight emphasis on architecture. Everyone in my group is from different fields, which is great, since we all share our knowledge with each other and then once it’s over, everyone stays in their respective field. For my Bachelor’s, I studied Industrial Design Engineering – in other words, product design. For my Master’s, I wanted to learn something deeper, something more specific. In Hungary, where I come from, there aren’t that many Master’s programs that fit my profile, but there are such programs in Denmark. I’m happy with my choice, as I have realized that lighting design is also a field where there are many specific and distinct areas.

Paulina: Yes, our group is very diverse: we have engineers, architects, even a linguist. What I like about our education is that they take you as you are and let you do the things you’re better at. They don’t make people work on the same exact tasks; on the opposite, we can develop our ideas and receive support from the professors. I used to study Electrical Engineering with a specialization in lighting technology, but that was more about the actual technology. I still lacked an understanding of design.

What do you plan to do after you’re done with your Master’s? What work opportunities will be open to you?

Beata: I’m thinking of staying in Denmark, as there are more opportunities for lighting designers there. It’s a well-developed field there, and there are many architectural bureaus that deal specifically with matters of lighting. I can work with one of those; I can also work with various lighting design visualization technologies, such as VR, which you can use to show lighting design concepts to clients. There are other areas, too, such as scenic lighting, and that’s a whole other area.

Paulina: I’m going back to my home country, Poland. Lighting design is still a new field there: there are some specialists, a few small companies, but it’s no Scandinavia. It’ll be a challenge for me, as I can help develop the field, make efforts to spread lighting design. I’ll be able to bring home the experience I gained in Denmark.

Lighting design is still in its infancy here, in Russia, too, which is why we need more people to understand what it is and why we need it.

Beata: That’s right; you need to change the citizens’ perception. For a long time, lighting was the domain of engineers and architects, not designers. There was less budget money allocated for that sort of thing, so it was seen as something that’s just there, and no more than that. I’m seeing architecture companies in Hungary start paying more attention to the role light plays in creating a certain image. And today we have to start thinking about another issue: now that cities are alive 24 hours a day, we need to find ways of lighting them without contributing to light pollution.

Perhaps lighting design will first be developed in the commercial sector: for instance, construction companies may list it as an additional feature when selling apartments. After that, the authorities will, too, realize the importance of it.

Paulina: People themselves must understand that lighting creates a better atmosphere. When my friends first learned I was going to study lighting, they asked: “Are you going to zap us with electricity?” And now when they buy an apartment, they always ask me for tips on how they should use light to make things cozy and comfortable.