The Winter School “It’s Your Call!”, organized by ITMO University and Sberbank, has recently begun its second season. The school brought together the participants of the national student competition “I am a Professional” in five educational tracks (“Programming and IT”, “Data- and Cybersecurity”, “Big Data”, “Robotics”, and “Photonics”). 180 Bachelor and Master’s students came to ITMO University to compete and shared their expectations for the Winter School. 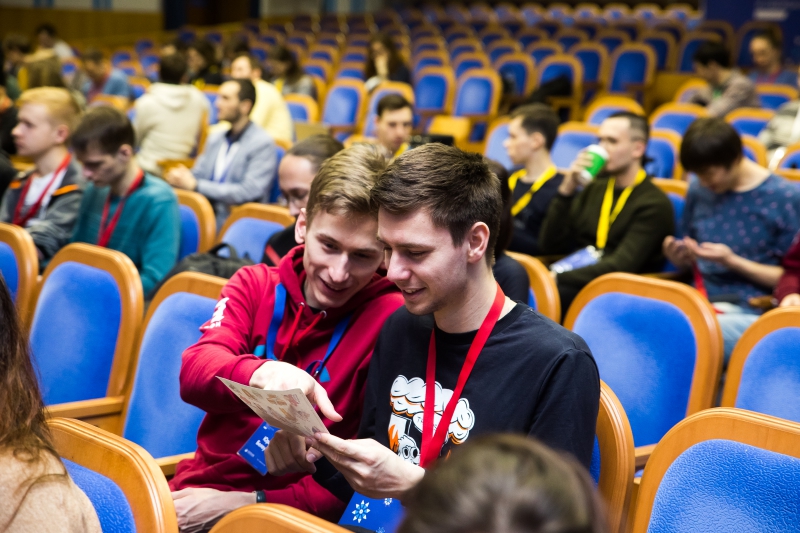 ITMO University and Sberbank's Winter School "It's Your Call!"

This time, 180 students  from 39 Russian cities have joined the winter school “It’s Your Call!” to attend lectures by the nation’s top experts, tour ITMO University’s laboratories and compete in intellectual and athletic prowess. This is the second season of the winter school co-organized by ITMO University and Sberbank. The participants were welcomed by Sergey Fiks, the deputy head of Sberbank’s St. Petersburg headquarters.

“Today, no other company hires as many IT specialists as Sberbank, and we have the largest number of staff working with Big Data, robotics and programming in Russia. We believe that these days it’s impossible to stay effective and relevant without focusing on the digital. And that’s why we’re highly interested in supporting initiatives such as this winter school,” said Mr. Fiks.

On the school’s opening day, Sberbank staff spoke with the participants about the company’s newest youth career guidance service where visitors can learn about jobs, internships, and events for students and graduates. Sberbank is the Winter School’s main partner in the educational tracks “Big Data”, “Programming and IT”, and “Data- and Cybersecurity”.

Participants of “It’s Your Call!” will get to participate in keynote lectures, do project work, and visit entertainment events (including networking meet-ups and visits to the ice skating rink at New Holland and to the Planetarium 1). At the keynote lectures, the students will learn about interdisciplinary projects where they can apply their skills and work in teams.

Each educational track will get its own program that includes tours of companies and ITMO University labs, as well as workshops. The Winter School is headlined by Andrey Sebrant, the Director of Product Marketing at Yandex, Alexander Boukhanovsky, head of ITMO University’s School of Translational Information Technologies, and Alexander Baulin, the Science and Technology Editor at Forbes Russia.

All students of the Winter School will attend workshops on soft skills and public speaking. These skills will come in handy when the students begin working on their projects. Just like a year before, the winners will get the opportunity to enroll in Master’s and PhD programs at ITMO University without having to take entrance exams.

The Winter School emphasizes interdisciplinary skills, and therefore all students will be sorted into five-member teams that will include representatives of all five educational tracks. Topics for the projects include medical forecasting, design of a “study room of the future”, cashier-less stores, robotic on-campus mail delivery, and even street-cleaning robots.

All of the available topics have to do with campus life. The best ideas will be taken into consideration by the developers of ITMO University’s new campus Highpark, and some of the teams may even get the chance to bring their projects to life. Winners will be chosen via voting carried out among the students.

When the contest first started last year, there was not much information about it, and I missed the registration deadline. After a while, I got to know people who participated in the contest for the second time, and advised me to try it, as well. At MIPT, I do computational aerodynamics. Despite the fact that I participate in the “Programming and IT” track, my area of interest is closer to big data, since there is need to parallelize the algorithms for processing large amounts of aerodynamic data. At the same time, I also enjoy programming. I applied for three tracks  - “Programming and Information Technologies”, “Big Data” and “Data- and Cybersecurity”, and was invited to participate in the former. I feel lucky because ITMO is a top university in the field of competitive programming. If I were offered to go to MIT to learn Slavic philology or theoretical physics, I would choose theoretical physics, because the university is strong in that particular field. In a similar fashion, going to ITMO for workshops in competitive programming is pretty obvious a choice.

I found information about the contest on the Internet, the organizers actively advertised it, and I decided to give it a try. I had to solve the tasks at the very last moment, so I wasn’t really motivated, but later the teachers supported me and I got fired up. I noticed that the tasks in the qualifying round were from different topics, I don’t think that anyone has solved everything, some of the problems were from highly specialized areas. In Vladikavkaz, I study applied mathematics and computer science with a focus on mathematics. As for my expectations for the Winter School, I really like the opportunity to find like-minded people and meet students from all over the country.

Alexander Bukhanovsky, dean of the School of Translational Information Technologies at ITMO University, has become the main curator of the Big Data track that is new this year. This is the second largest track; its 48 participants will study the algorithms of complex systems in a hackathon format, will be introduced to using Big Data technologies for the purposes of modeling the Arctic climate, and take part in many other educational activities.

We study at the Moscow Institute of Electronics and Mathematics on the program "Computer Science and Computer Engineering", i.e. we study information technology in general. We knew about last year's contest but decided not to go. Later we heard that the contest is really interesting, besides, the “Big Data” track was introduced. We passed the qualifying stage, wrote a motivational letter, checked with the website and found out about the opportunity to meet famous people from our field, learn new information and upgrade our skills at various workshops. At that time there was no information about the speakers, but everything sounded interesting already. The fact that ITMO University is one of the top universities in programming also played its part.

23 participants of the "Photonics" track will go to the Svetloe radio astronomy observatory , as well as on tours of the laboratories at ITMO University.

Victoria: We work together at the Perm Scientific-Production Instrumentation Company that produces fiber-optic gyroscopes. My love for photonics has much to do with ITMO University: in the 10-11th grade I participated in a contest and came to ITMO for the finals. They showed us the laboratories, the “invisibility hat”, and it seemed like magic. However, I did not go on to study photonics, because I considered the field too narrow, and decided to study Radiophysics instead. As for the Winter School, we decided to participate because we have to choose where to have our Master’s degree and postgraduate degrees, and we consider ITMO to be our first option.

Yanina: I study Photonics, I have had a wonderful department head of the who taught me to love this field. Our company offers great opportunities for students who want to progress in science and advance the industry. In our work, we use optics to develop fiber-optic gyroscopes, more than 90% of which are purchased by the state and used in the defense industry. I plan to continue my studies at ITMO University on a Master’s program.

From ITMO’s side, the “Robotics” track is supervised by Sergey Kolyubin, the head of the International Laboratory of Biomechatronics and Energy-Efficient Robotics. 25 students became the participants of this track. They will be engaged in creating an autonomous mobile robot, designing adaptive robots, visiting the laboratories of the ITMO University and the Geoscan group of companies that produces and supplies unmanned aerial surveying systems, photogrammetric software and more.

I took part in last year’s competition, but in a different educational track. I decided to choose another one this year because robotics is more closely related to my major. I’ve heard about ITMO University before and I was sure that if I come here, I’d learn something great. While I’m here, I hope to learn more about studying here; I’m considering ITMO University for my Master’s degree studies because I know they’ve got great robotics laboratories here.

The 30 participants of this track will take part in CTF hacking competitions.

This is my first time taking part in the competition; I heard about it from my dorm roommate who came here last year and won. I came here to hone my skills, as I got a job in my second year and would like to use my newfound skills at work. My major is in software engineering and I plan to get an industry job after getting my Bachelor’s degree.

A friend of mine who was a winner in last year’s competition had suggested that I take part, too. My university supported my wish to come here because they found this an important event. I’ve seen pictures from last year’s Winter School and I hope it’s going to be interesting this year, as well. It was fun seeing other data security students because there are only 15 students studying that subject at my university. Right now I study data security and plan to pursue a Master’s degree in this field.