Gabriel Guerra left his beloved Ecuador to enroll in the Master’s program “Network and Cloud Technology” at ITMO University through a scholarship supported by the Russian government. In this interview with ITMO.NEWS he tells us about the process to get this opportunity and shares his experiences of studying and living in Russia. 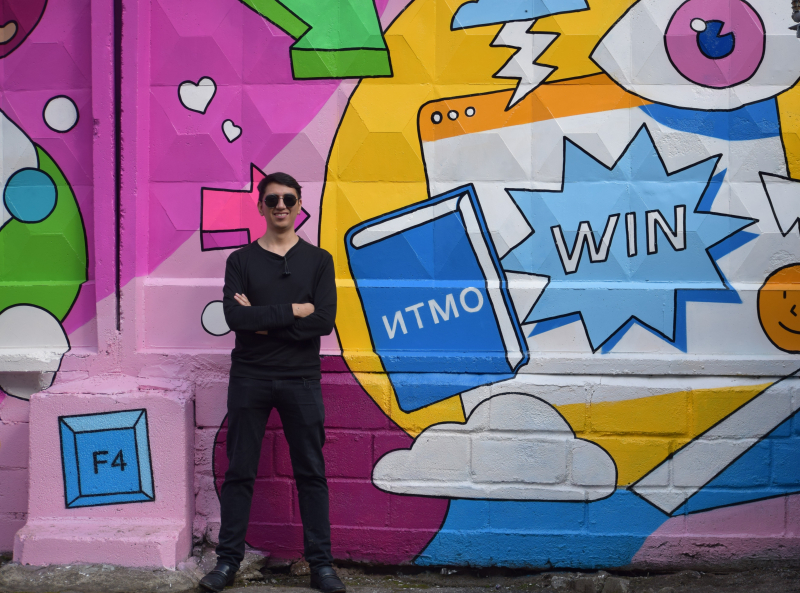 Gabriel graduated as а Electronics and Telecommunications engineer at Polytechnic National School in Ecuador. While he was studying his Bachelor’s degree, his desire to go abroad increased with the time.

“I always wanted to know how people are in other parts of the world, how they live, what culture and customs they have. Honestly, I have never considered Russia as an option to study. Maybe this was because of a lack of information about how to do this,” says Gabriel.

Back in his country, he read about opportunities of study in Russia, then he discovered that there is a very distinguished University located in St. Petersburg, which is famous for its talented students in IT programming. That’s how he discovered ITMO and this program that focuses on acquiring knowledge and skills in the field of distributed computing resources, virtualization, and computing services.

He comments: “This technology called Cloud World, is not unfamiliar to me because of my experience as a worker and a client of a company in my country. Now I want to study it in a more formal way and take my knowledge to another level.”

Along these lines, he started to search for scholarships to study in Russia, till one of his friends saw the information about it and told him, and immediately, with the desire to take on the world, he decided to embark on that adventure to the cold lands of Russia, prepared all the documentation needed and he applied for it.

After checking the information (diploma, notes, CV, translations) they sent regular communications at each phase of the selection process. After passing all the phases, they sent him an invitation to study in Russia, and a visa invitation to apply for a student visa.

“The process to obtain the student visa was quite easy, once I got the scholarship and the invitation from the University. Basically, you just need to fill in a form and pay for the visa. Back in the embassy, the staff were very helpful to do this.”

Gabriel’s first impression of Russia was in the airport when he realized that everything was written in some kind of indecipherable hieroglyphs. “Luckily my experience through immigration and other controls was very calm. One thing related to food, that I clearly remember, happened the first night in the city, I was really hungry and left my hotel to look for a place to eat. I didn’t walk a lot when I found a kind of kiosk with the word Теремок on it. I wasn’t sure what to do so, I had to call my local buddy to place the order for me. Then, I faced the reality that I was no longer in my own country,” says Gabriel.

As anyone can imagine, that kind of journey is not easy. Gabriel remembers with a nostalgic smile his beloved country, there are a bunch of things that he misses from Ecuador and Latin America, especially the food. Certainly, there is a big difference between those countries and he notices that the knowledge about Russia of the majority of people, on that side of the world, is only some names of politicians, vodka, bears, and the weather.

“I think that the Russian culture is bigger and deeper than the silly stereotypes that we were told. The city is so beautiful, you can always go for a walk and find some new buildings with amazing architecture. St. Petersburg is a fantastic city to live, it is very cultural, and you can feel it every time you go outside”.

After some time in Russia, Gabriel’s perception of Russia started to change. He did some history research and realized the influence of Russia in the world after the USSR. Now he believes that this country can offer great opportunities for him to develop.

When asked about his first days as an official member of the ITMO Family, he says that this University has broken the stereotype that he had in mind. The hierarchical structure is different,bringing students to the top of the institution and giving passage to the concept of a non-classical University. He wants to feel welcomed and included in all the aspects inside the University and expects to increase his knowledge in order to be a valuable asset to the institution.

“People look different from what I am used to. However, they have the same feelings, likes, dislikes of any rational human. Once you can break the ice, you notice that people are the same in any part of the world. All that we want is to be happy and loved”.

Gabriel has some hobbies that are involved with music and languages, luckily he already had the opportunity to share these with local people in both areas. He is interested in being part of Megabyte to develop in areas like music production and DJ performance.

When asked about his plans for the future, Gabriel says that after ITMO he doesn’t know yet what path to take, because as one of his friends used to say: “When nothing is certain, everything is possible”.

Gabriel’s advice to future students is to take out the fear. All great life-changing experiences come to those who risk facing them. So, if you have the opportunity to study here, take it. You will not regret it.