Kevin Santisteban is a Bachelor’s student in System and Applied Software program at ITMO University. He came to St Petersburg almost a year ago, looking for a change in his life. In an interview for our portal, he talks about his aspirations, passions and experiences in Russia. 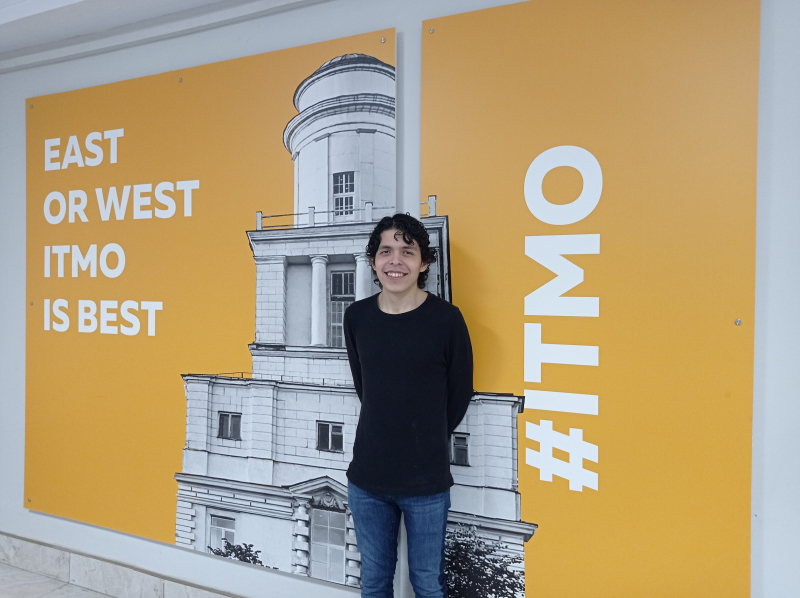 How did you end up in Russia?

I was studying at the University of San Carlos in Guatemala, but the educational level didn’t satisfy my expectations. There I was going through a very difficult situation, which forced me to start working, so I got a job as a programmer, and that allowed me to solve my problems, but at the same time, I had to leave my studies. While I was working, I got an opportunity to apply for a scholarship to study in Russia, which I thought was a great chance of making an important change in life. I got accepted and here I am.

How did you become a student at ITMO University and why did you choose that program?

A few years ago I got deeply interested in Russia, the language, the culture, and the people. So I decided that I wanted to learn Russian, which turned into a very difficult task because I started studying it by myself with some books and apps such as Duolingo. In Guatemala, there are no good programs in the Russian language because of the lack of native speakers and well-qualified teachers. In the process of self-learning, I made great friends from different cities, regions and countries where the language is spoken. So it felt like Russia was familiar to me already.

That’s why I decided to apply for this scholarship which every year is promoted by the Russian Embassy in Guatemala. I met the requirements and passed the selection process through the Russia study site and chose ITMO as a first option since I read some news about the victories in the ICPC (International Collegiate Programming Contest) so I knew that it was a good university for IT.

I decided to choose this degree because I love coding and the scientific basis that it implies, not only at a modern high level and commercial languages but those closer to hardware.

I’ve worked as a programmer, thus I do believe this is the degree that fits me best.

Have you decided to study online or in-person?

I’m currently attending in-person lessons. But considering the current situation with the increase of coronavirus cases in the country, I would prefer to be studying online.

How did you feel during your first days in Russia? What were your first impressions?

On my first day in Russia, the temperature outside was very cold, or at least for somebody that had arrived from a country where it is always warm or hot. The first days were pretty tough. I loved the city at first sight, but adapting to living in the dormitory took some weeks. Trying to communicate was also really hard at the beginning, but the Russian I had been studying before helped me in simple situations. People mostly treated me in a very welcoming and kind way, that is something I really appreciate.

What surprised you and what did you like the most about St. Petersburg and ITMO?

I love St Petersburg’s architecture. The main cultural places such as theaters, museums, palaces, jazz clubs and so on. This city has a rainy climate, which I love, and a peaceful atmosphere. Also, the transport system and urban organization are sensational.

What can you tell us about the University’s life as an ITMO international student?

So far it has been hard, considering that even after completing Russian language courses at the Foundation program, I find it difficult to understand all the classes. Fortunately, my classmates are great, I have made new friends, teachers are mostly good and well-prepared and they help me.

What do people in your country think about Russia? Is there anything you miss about your hometown?

I think people in Guatemala really don't know that much about Russia, apart from the references in movies.  As mentioned before, I found many Russian friends from whom I got different perspectives about Russia. My perception stays positive as it did before, but there are some aspects that could improve.

What I miss the most about my country apart from my family and my pets is definitely the food. Latin American food has a particularly rich mix of flavors that so far I have not been able to find here.

What are your hobbies? What do you like to do besides study?

Even though I don't have too much time for hobbies, I try to get some space in my schedule for them. I love music: I play the violin and the guitar when I have a chance to. And of course, the foreign languages, now my focus is on the Russian language, but I’d like to find time to practice my Portuguese and Italian more.

What are your expectations at the University and your plans for the future?

I hope to learn the basis for managing a professional and well-structured software development process, to learn programming patterns and standardization, as well as to get deep into computer sciences. In the future, I would like to either remain in Russia or live in a new country where I can practice languages and experience something new.