A professional dancer, Julianne Gomez is a Cuban second-year student of the Bachelor’s program Technological Innovations Management at ITMO University. In this interview, Julianne tells us about how since childhood her life has always been linked to Russia and how this influenced her decision to study at ITMO. 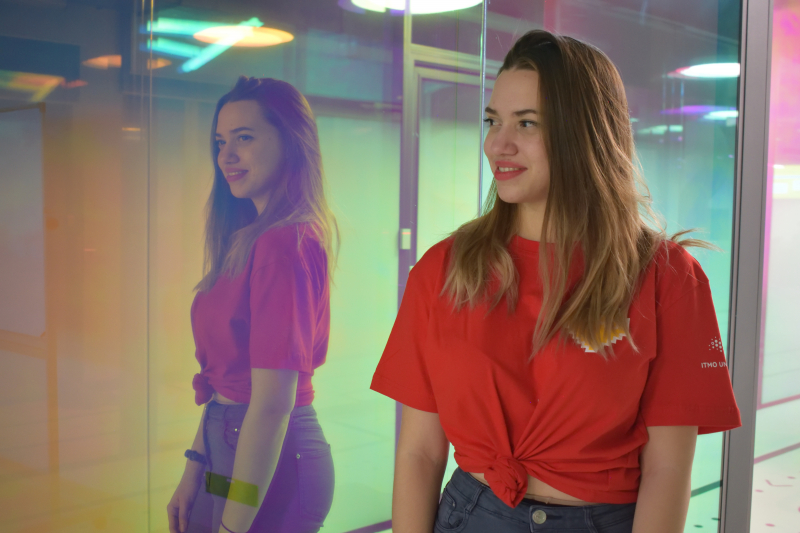 Technological Innovations Management: what is that, exactly?

The program in which I am studying launched just a few years ago and is in great demand among applicants. It is considered one of the professions of the future because it is useful in any type of company. If we consider the constant advancement of information and communication technologies, this specialization will be increasingly necessary. An expert in technological innovation management acts as a leader, guiding a company towards innovation in all possible aspects. To carry out this work, it is necessary to know in-depth how a company works, to be creative, think critically, have good communication skills and fundamentally have the ability to lead. ITMO University teaches us to form all these qualities.

Where did you study before coming here?

I did primary education up to 4th grade in Cuba. For job reasons, my parents temporarily moved to Moscow, where I enrolled in a public school for two years. Upon returning to my country, I continued my studies at the Russian school at the Russian Embassy in Havana. In this way, I would keep active the language which I began to study out of necessity. After graduating from high school, and because of my passion for music and dance, I decided to venture into that branch. I took aptitude tests and managed to enroll in a dance academy in Havana, from which I graduated as a professional dancer.

How did you learn Russian? Do you have any tips on how to learn it?

In Moscow, there was no Cuban-language school attached to the diplomatic mission of Cuba. There was no choice but to take classes in Russian. It was a big change for me. Of course, the grades that came after, until the 11th, were the definitive ones to better assimilate the language. I was always communicating in Russian with my classmates and school teachers, and the classes were in Russian only.

I think the best way to learn Russian is to be in Russia. Russian phonetics is complicated and only by being here will you more quickly train your ear to correctly pronounce sounds that do not exist in the Latin languages. This interrelation with Russian-speaking people has improved my understanding of the language. So if you want to learn Russian real fast, come here.

How did you become a student at ITMO?

My interest in Russia comes from when I was a child. My parents did their engineering career in Russia. In fact, in this very beautiful city of St. Petersburg. My older brother was also born here. In our house, people always spoke in both languages – Russian and Spanish. That caused me some difficulties because when I was a child, I did not understand Russian. The only word I knew and used almost daily was: "отпусти", something like "let go", when my brother was trying to mortify me. Even today we laugh at remembering it. It was the work of fate that I learned Russian, and where better to study my career than in Russia?

I checked a few pages of several universities in Russia, but ITMO was the one that caught my attention for its prestige, its education system, and its location. As a child, I had visited St. Petersburg through an exchange program between the Cuban Embassy in Moscow and a solidarity organization in St. Petersburg. We stayed with Russian families, shared dinner and walks, and I was impressed with their hospitality. Despite the cold snowfalls of those days, we enjoyed the visit to the fullest and made new friends. This meeting with St. Petersburg, linked to our family tradition, greatly influenced my decision.

How did you know about this opportunity to study in Russia?

Surfing the internet, I learned that ITMO was organizing an international mathematics competition and that the winners would get a free scholarship. I did the tests without much confidence in winning, rather to please my mother. At that time I was determined to train as a choreographer and start my own dance company. I am passionate about dance: salsa, afro-Cuban folklore, hip-hop. They are very complex rhythms that require good physical preparation to execute them.

When I received the notification that I had obtained the scholarship at ITMO, I felt very strange. It's that moment in life when you want and don't want something at the same time. My mother did everything she could to convince me. I thank her very much today.

How was the process of coming here as an international student and what were your first impressions?

All the procedures for obtaining visas and other documents I carried out without difficulty through the consular office of the Russian Embassy in Cuba. When everything was ready, I traveled to St. Petersburg. Here, many things were familiar to me: the weather, the meals, the language, the people. Almost everything except for the University. My first impression upon entering ITMO was very good. I felt like I was in the right place for me. However, adapting to the dormitory life was very slow and difficult, as I had never separated from my family and it was a new challenge. I had to learn to cook and perform all household chores without help. If the alarm clock rang and didn't hear it, it was my responsibility. There was no one to wake me up or prepare my breakfast. It was a very hard year that prepared me for the following. Now, I am more independent and have taken control of my life, leaving behind all fears.

We know that you are also part of the ITMO staff. What is that like?

I am currently working with the university’s international office. We are promoting ITMO in the Latin American market. I make videos for our Spanish-language Facebook page and interviews with our international and Russian students. We are a young, cheerful, and responsible small team. Our relationships are of respect and camaraderie, and collective interests are above personal interests. We work very hard so that everything happens on schedule. The main thing is that I have learned to combine study with work without neglecting either of them. Organizing in that sense is very important.

How did you get this job?

This job came to me by pure chance. Apparently my desire to do and the need for someone to do it coincided in time and space. At first, I was afraid to take on the challenge, but now I'm happy to be able to promote my university to the students of my continent. I feel the immense desire for you to get to know this great country, this fantastic city and the best university in Russia – ITMO.

ITMO is the best university in Russia. I have friends who study at other universities in Russia and I speak with them a lot. I told them about ITMO and about the student life here, but everyone thinks I over exaggerate. Because we are much more than others assume. We are atypical, we are unique, and that makes the difference with the rest. No university in Russia (at least that I know of) offers its students all the possibilities and facilities that ITMO does. There is a select group of teachers, many of them are young and share our tastes and preferences and that makes communication between students and teachers feasible. I believe that the scientific level of ITMO is so high because they offer us the possibility to relax when we need it. That's why the university constantly organizes countless activities which take us out of the student routine and give us the strength to continue. Something like charging your batteries when you feel like you're running out of power. I wouldn’t trade ITMO for any university in the world. I feel happy here.

What do people in Cuba think about Russia?

Between Russia and Cuba there are historical ties of friendship, which still exist today. They date back more than 60 years. For Cubans, Russia is a friendly country that has shown, over the years, its solidarity with our country. Today there are many collaboration agreements between the two countries in many branches of the economy, including education.

My hobbies are dancing and playing tennis. I am a fan of Maria Sharapova and at a certain stage in my life, I dreamed of being able to play like her. Playing tennis here is complicated, but for my dance training, I always find a little time.

I really like to participate in university life. I've had the opportunity to participate in several volunteering events such as the NATE Jubilee Convention and the More than ESP conference, organized at ITMO with the support of Cambridge University Press and the Pearson and Macmillian education portals, among others. Recently, our university launched its own TikTok page. And I belong to the ITMO team that makes the videos for this social network. Mostly, I'm in the art section and I mostly show Latin dances there.

One day, I would love to join the volunteer club Paws of Help. They help animals by visiting shelters, donating food, and looking for people who want to adopt them.

My expectations are to graduate from ITMO and get a good job, which in turn would allow me to devote some time to my hobbies.

Any advice for other international students who want to come to Russia and learn the language, get a Bachelor’s Degree, change their life as you did? Would you recommend it?

First of all, I recommend that foreign students do not relate only to others of the same nationality. It is a trend that we follow because it is much more comfortable for us to speak in our native language than in Russian. But know that this is a big mistake. You have to talk as much as possible with Russian students. It is amazing what advances you will notice in the language if you strive to speak in Russian most of the time. In a short time you will begin to think in Russian, and even your dreams will be in Russian. It's funny how it happens, but it's the only way I know to absorb the language: straight from the source. In addition, Russians can help you a lot as to how to properly warm up in winter, or what to do if you get a cold. They know many natural home remedies, which will be of great use to you. Knowing Russian culture and idiosyncrasies will enrich your knowledge of the language and make you feel more comfortable in this country.