A year ago, Moustapha Nour left the hot African climate of Djibouti to enroll in the Master’s program in Molecular Biology and Biotechnology at ITMO University. In this interview with ITMO.NEWS he told us about his journey to Russia, his experiences as an international student, and his short- and long-term goals. 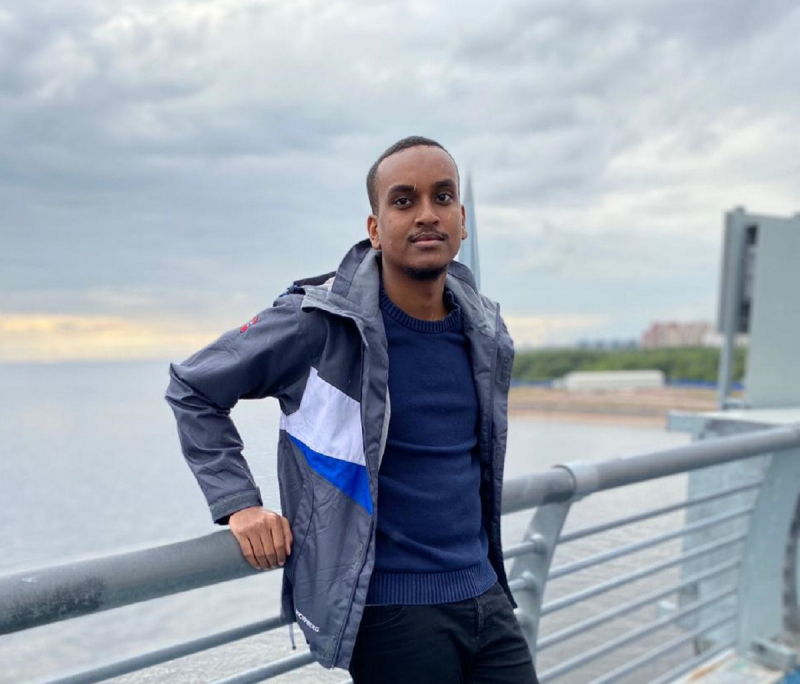 I won a competition to get a scholarship that the Rossotrudnichestvo federal agency offers every year to international students. I had to choose between different universities, but eventually, I decided to enter  ITMO University because of its prestige and worldwide recognition.

In terms of getting the scholarship, my old university called the best students of each faculty to do an interview with Russian staff members of the government institution that offers the scholarship. Fortunately, I was one of the chosen ones. By the end of this interview, they chose  20 students out of 150 and I was the only biologist among the admitted.

I got my Bachelor’s degree in 2019 and after that, I came directly to St. Petersburg. I studied Biochemistry at the University of Djibouti.

What goals did you have as a child and as a Bachelor’s student? Did you ever think of Russia as a place to acquire your Master’s degree?

As a child, I wanted to become an archaeologist, more precisely an Egyptologist because the Pharaohs have always fascinated me. However, after watching the movie Gifted Hands, something changed deep in my mind and I decided to become a neurosurgeon, so I did everything in my power to make it come true. But due to an unfortunate accident, I couldn’t pass the medical school admission exam.

During my Bachelor’s studies, my only wish was to become a researcher in the pharmaceutical field. Never in my life would I think of coming to Russia and studying here because of all the stereotypes that we have in my country. However, life is unpredictable and here I am doing my Master’s.

What were your first impressions of St. Petersburg? How did you feel in the beginning?

Frankly speaking, I was a little bit disappointed because I expected St. Petersburg to be like New York or London or as some other major city: full of large and tall buildings and modern towers. But then I strolled through the streets, saw amazing historical places, and my perception of things dramatically changed because without modern architecture St. Petersburg has that side that appeases you and immerses you in history. You quickly fall in love with its omnipresent beauty. Not surprisingly, this city is a popular tourist destination.

Russia honors its reputation as a freezer. As I come from a warm country with temperatures reaching 49°C and ended up in Russia with temperatures below zero, you can easily imagine that at first it wasn’t easy for me here. Fortunately, I came in autumn and I had time to adapt to the weather.

What do you think about the Russian language? Do you find it difficult to learn?

As for the language, it was really difficult. It was hard for me to focus on the Russian language because I’ve never studied another foreign language so intensely, so I didn’t have a learning method. Despite it all, my two teachers and my classmates helped me a lot. I have a B1 level in Russian but I haven’t really mastered it, because the coronavirus forced us to study half the academic year at home and it was a huge challenge for me to continue studying intensively in online format.

What can you tell us about university life as an international student?

Right now I live at one of the university’s dormitories and I can say that the only thing that bothers me is that it’s the first time I’m forced to share a room with someone, so there is no privacy. But what doesn’t kill us makes us stronger.

The other students and the people in general here in Russia seem to be kind and very respectful. For now, I don’t have too many Russian friends but the important thing is the quality and not the quantity. ITMO is a friendly place with a lot of activities that distract you a little when you are full of studies.

What is the perception of Russia in your country?

In the past, it was believed that if you went to school in Russia, you’d be drinking vodka and get your diploma easily. Also, some say that Russians are aggressive and even that there is racism here. But for the last six or seven years, those who have studied in Russia have done better than those who return from other countries because the quality of education here in Russia is better than in other countries. In that way, my vision of Russia has totally changed. I believed a little bit in all the common stereotypes but so far I haven’t seen anything even similar to what people used to say.

Is there anything you miss about your hometown?

I miss everything. The most surprising thing is that I miss the blazing sun, even though I used to hate such a hot temperature every day – now I can’t wait for summer to come. I also miss the traditional dishes of my country.  I tried several Russian dishes and none of them were to my liking. But I hope I will find something to delight me.

What are your hobbies? What do you like to do besides study?

I'm a real fan of TV series and films. I can spend hours behind my screen binging on entire seasons. I have not yet participated in extracurricular activities, but I think it would be wonderful to do so. My favorite hobby after the movies is to have a good time with my friends.

My plans are to finish my Master's degree with honors and continue with a PhD, then go back to my country and work on its recovery in the field of science.

Any advice for other international students who want to come to Russia and do a PhD here?

I'd strongly recommend you to get your degree at one Russian university and especially at ITMO, because the education here is on the same level as the best universities around the world. Even if the biggest obstacle for foreigners is the language, that is not a reason to be discouraged, do it! Because in life if you don't challenge your own determination you won't achieve anything.