This week, ITMO.NEWS takes you to the eastern coast of the Mediterranean Sea. Mohammed Alsultan came from the Gaza Strip in Palestine to study for a Master’s degree in robotics at ITMO University. In this interview, he tells us about the decision to change his life and move to Russia, his love for St. Petersburg, and his dreams and goals for the future. 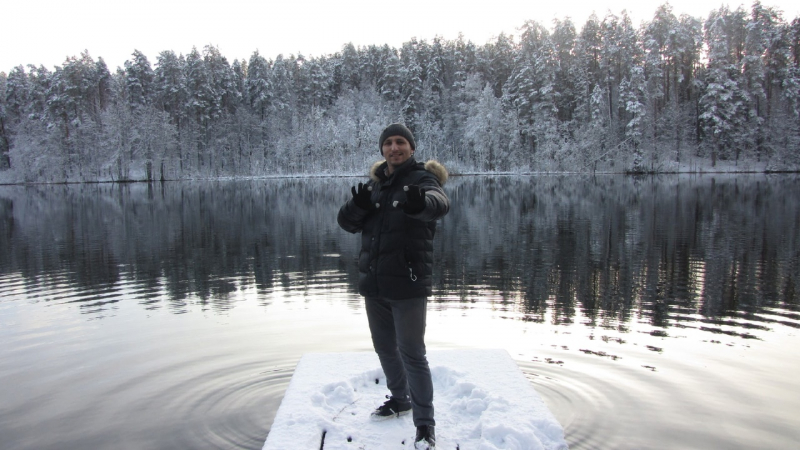 Why did you decide to get a Master's degree in robotics?

It was one of the specializations that I have loved since childhood. Robotics, the Internet of Things, and artificial intelligence are considered the future of the world. I see them as my passion and my future.

How did you come to study at this University?

After finishing my Bachelor's degree in Palestine, I worked for two years as a professor's assistant at the university. I really enjoyed that job, so I decided to complete my graduate studies and applied for a scholarship from the Russian federal agency Rossotrudnichestvo. I put ITMO University as my first choice due to its high ranking and the city’s location – St. Petersburg. I got the scholarship and now I’m pleased to be a member of the ITMO family.

Was moving to St. Petersburg a big step for you?

Most students have a hard time in the beginning, but for me it was an incredible experience. I have made friends who have helped me a lot, both in everyday life and at university.

My uncle and his family met me at the airport and on the second day I went on a tour with the university. It was an incredible period for me. The weather was cold, but I liked it anyway.

The best part was when I saw the snow for the first time in my life. I couldn't believe it. It was an unforgettable moment.

Before coming here, I got a Bachelor’s degree in the field of mechatronics and robotics from Al-Azhar University – Gaza.

It started with the scholarship application, and then the university started emailing me and making it easier for me to apply for my Master's. The registration process was quite well illustrated with documents and the ITMO office staff were very helpful. Then, the university sent us the visa, and I began to communicate with the Russian Consulate of my country, after a month I obtained my visa and I came to Russia. I arrived here a month later than expected due to the political situation in my country.

After arriving in Russia, the Student Service Office and the international office helped me a lot with all the documents. They welcomed me from day one with a tour of the city. It was fun to explore St. Petersburg. It is an incredible city.

What were your first impressions of the university and St. Petersburg?

The city was colder than I am used to, but, on the other hand, it is full of wonderful places, especially in the center of the city, along Nevsky Prospect.

The university helped me organize my residence in the dormitory from day one; it is not the best, but the students are friendly and fun.

Learning the Russian language was a headache for me because I arrived here a month later than my fellow students. The teacher and my friends helped me a lot at the beginning and now I’m happy with my level of Russian.

The most interesting thing was the food. At first, it was strange for me and it was difficult to adapt to it because it is a little different from my country’s, but over time I got used to it. I like Russian pancakes – they are one of my favorite things to eat.

What surprised you the most about ITMO?

What surprised me the most was that the university is considered one of Russia’s top best universities for computer science. The lecturers, students, and the quality of teaching are all top-notch. I was pleasantly surprised that they have graduate programs in English.

And in addition to everything I already mentioned, I love that ITMO has over 70 different student clubs and a leisure and sports health center like Yagodnoe, to hang out and relax.

How was your experience in Yagodnoe?

I’ve been there twice. It was a great experience and I would like to go there as much as I can. There was a fascinating wooden house with an incredible dreamlike view. We had many activities. I met incredible people, and the environment is ideal to relax.

What is your relationship like with other international students?

I had a good relationship with other international students in our preparatory Russian course, but due to the coronavirus it was a bit difficult to keep in touch.

However, ITMO always tries to connect international students through clubs and trips. And all this makes the international community of students more united.

I generally like to do sports, like fitness, jogging, and swimming; some of these things I have done at the university facilities. I also like to talk and socialize with people, go on trips with new students and familiarize them with the city.

I hope to learn and acquire adequate knowledge that will allow me to work after graduation. My dream is to be an academic professor, so my future plan is to work for a PhD, and it would be great to be able to do that at ITMO University. I plan to work in my field of study after finishing my Master's degree, to apply my newly-gained knowledge, and be able to continue with a PhD.

I could tell you the following: Russian is a difficult language, but on the other hand it is very interesting. You will be living among native speakers of Russian, so don't be shy, talk and communicate with people! Meeting new people is a sure way to learn the language faster.

For the Master's degree, I recommend that you study in Russian. Because I believe that the top skills like information security and programming are taught only in Russian.

Be yourself, be open-minded with people, don't judge anyone. A smile can change anyone's life.