A video mapping project by Daria Protnikova, a Master’s student at ITMO’s program in Multimedia Technologies, Design and Usability at the Faculty of Software Engineering and Computer Systems, became a part of the Night of Arts exhibition at the Mikhail Anikushin studio. 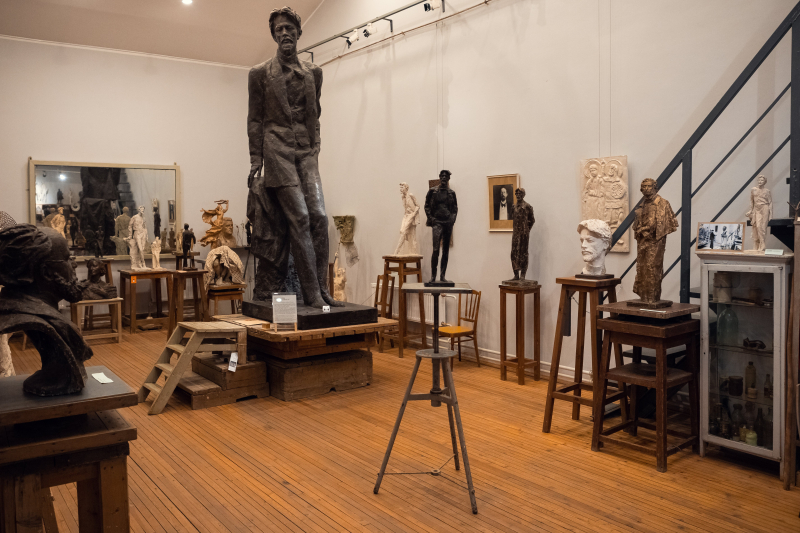 Originally, the project was to be exhibited during the Long Night of Museums, but due to the pandemic the event took place online and the project remained unseen. In the meantime, Daria Plotnikova graduated with a Bachelor’s degree from the program in Computer Technologies in Design, took third place in the graduation thesis competition, and got into a Master’s program. Now, finally, the project that brought Daria the victory in the university competition, will be finally presented to the public.

The exhibition When a tree becomes a stone at the Mikhail Anikushin Studio (a branch of the State Museum of Urban Sculpture) opened in December last year and was originally planned as a long-lasting project. Lyudmila Titova and Yulia Machevskaya, curators at the studio, meant to demonstrate how contemporary sculptors perceive time. According to Yulia Machevskaya, the idea was to create a space where time would freeze and the visitors would be able to ponder on their own interpretation of this abstract and yet so feasible concept – time.

“The exhibition turned out to be rather meditative, with many thoughts on transformations happening in each of our lives, on different eras, and the historical process. The majority of sculptures and installations use natural elements in one form or another, be that grass, live plants, sand, or wood, – and just like in the actual environment, these elements tend to deteriorate over time. The grass turns yellow, the sand disseminates, the clay cracks all over, while ivy keeps growing higher and higher, taking over the statue of Lenin. Those exhibits explore the interaction between mankind and nature, the artificial and natural materials, and the synthesis of man-made and natural,” says Yulia Machevskaya.

Video mapping as part of the exhibition

In the winter of 2020, Daria Plotnikova started working on her thesis project that was to become a part of the Long Night of Museums that traditionally takes place in May. But due to the pandemic, all offline events were cancelled. The Night of Arts became the first chance to share Daria’s project with the world.

The most important task was not only to reflect on the main mood, atmosphere, and slow-paced rhythm of the exposition, but also somehow feature the key exhibits.

“It was crucial not only to emphasise the there of the exhibition – nature – but also related problems, such as the fluidity of time and the relationship between mankind and nature,” remembers Daria Plotnikova. “The project was meant to help the visitors immerse themselves into the atmosphere and reflect on the topics raised. That’s why I decided to create scenes that had something to do with each of the exhibits. For instance, the tree is an allusion to Lukas Arons’ ‘Over….. time’, and the portal symbolises its namesake created by Viktor Grachyov.”

It took Daria six months to finish the project: the video contained seven scenes, each of which was created separately in various visual and 3D editors, such as After Effects and Maya, using additional plugins and packages (for instance, Newton 3 that imitates real-world physics).

At the same time, just like in any other mapping, it was important to fit the animation into the area it would be projected onto. This task was further complicated by the museum being closed due to the restrictions – which meant that Daria didn’t have access to the exhibition hall. Luckily, she was able to refer to the works left by former students from her program, who had already done mappings at this location.

Digital art to take over the monumental one

Daria’s supervisor, Anna Spiridonova, a senior lecturer at ITMO’s Faculty of Software Engineering and Computer Systems, notes that the Mikhail Anikushin Studio has been the university’s partner for over four years, readily offering its space for students to bring to life projects in.

“The world is moving forward, and while Mikhail Anikushin’s generation created monumental projects – major sculptures made from long-lasting materials – now digital art is the zeitgeist, as it simultaneously analyzes and transforms our reality with technologies. Our Bachelor’s students have already created video mapping projects and 3D illusions both for the Long Night of Museums and for regular exhibitions at the Studio. In 2017, we even created a mini theatre performance, where actors interacted with graphic elements – it was the outcome of a collaboration with director Alexander Khromov. We are really grateful to the curators and the staff of the Studio for assisting our students and generally for the opportunity to exhibit their graduation projects at such a renowned space,” says Anna Spiridonova.