Michio Kaku on Digital Future: Should We Fear Robots?

The next wave of scientific and technological progress will be based on molecular biology, biotech, AI and nanotechnology, says Michio Kaku, a physicist, co-founder of string field theory and popularizer of science. In his talk at the St. Petersburg International Economic Forum, Prof. Kaku described a high-tech future complete with digital immortality and perfect capitalism. Do robots know they’re different from humans? What professions will soon be obsolete forever? Will we ever get a chance to chat with Albert Einstein? ITMO.NEWS provides a summary of the scientist’s predictions of the future. 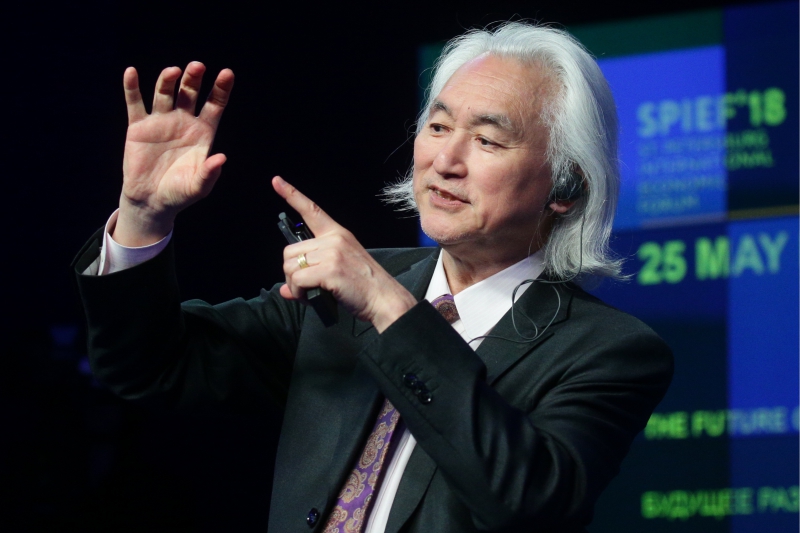 Computing speeds used to double every eighteen months; now, they double every year. All computation today is based on silicon, but in the future, we’ll have quantum computing and a Quantum Valley instead of the Silicon one. Surgeons today have internet in operating rooms in order to have access to MRI scans and medical records; soon enough there will be robot doctors able to use the internet to provide medical guidance. How much time do you spend on medical check-ups and tests? In the future, you’ll be able to use your wristwatch to consult a doctor practically for free. It’s the same with legal services: augmented reality and internet access will let you learn all about someone from just a glance.

Supercomputers will help us design supersonic planes that don’t produce a sonic boom. It took me 12 hours to get to St. Petersburg from New York. One day, that will only take two hours, in part thanks to the development of individual aerial transportation. We’ll have self-driving cars and flying personal vehicles. Perhaps we will no longer need personal vehicles and will just be able to call a car to any place we want.

You’ll be able to put a device in your contact lenses that will measure your blood sugar levels by the hour. Pain in your chest? Look in the mirror, tell it how you feel and you’ll get medical advice. 3D printers can make all sorts of things exactly the way you need to. Whenever you go to a shoe store, they’ll measure your feet and print you a pair of shoes right then and there; same goes for jewelry, toys and everything else. We’ll even have smart walls so that you can change the wallpaper whenever you’d like. Flexible electronics are already a thing, and soon enough you’ll be able to literally roll up any of your devices.

If everyone can find out anything they want with a blink of an eye using a pair of specialized glasses or contact lenses, what’s going to happen to exams? Obsolete concepts aimed at memorization of information will be replaced by learning of principles and modes of thinking.

Technological progress is bound to affect the job market. Professions that involve repetitive work will no longer be relevant, and so will the middlemen: accountants, cashiers, paralegals. Legal experts, however, will still be necessary, as they are the ones who present cases in court and talk to the judge. Professions that require spatial intelligence, logic and common sense will remain relevant, however. What is common sense? How do you know that the daughter is older than the mother, that water is wet or that if you tug on a string, it will budge? That’s common sense. Robots don’t have that. If you show a robot a table, it’ll see squares, circles, colors and textures, but it won’t know that it’s a table. Robots are bad with models and patterns. If your toilet is clogged, a robot can’t fix it just because all the toilets are different. Robots can’t replace gardeners because they lack a sense of aesthetic. We used to think that robots would replace garbage workers, but that won’t happen either, because robots can’t tell between garbage and useful objects.

Robots can’t take over the jobs that require intellectual capital. That’s experience, logic, leadership skills, creativity, innovative thought, communication with others. Tony Blair used to say that the UK got more revenue from rock ‘n’ roll than from the coal industry. How so? Coal is a commodity, and commodity prices change, while intellectual capital is always valued. It’s extremely difficult to model the human brain. Intellectual capital is the foundation of future economy. People come and ask me how to become a billionaire. First off, come to any industry. Secondly, eliminate the middlemen. In trade, for instance, that’s retail. Third, identify the sources of waste and eliminate them. Fourth, digitize everything. And there you have it: perfect capitalism. This is what Amazon is trying to do right now. Who’s going to win from this? First and foremost, the society. Prices will go down. Today, with the law of supply and demand, you can’t ever tell if you’re being asked for too much money. In the new economy, you’ll be able to observe the production process in its entirety.

Even today, we have devices small enough that they can be put inside a pill. When you ingest it, the shell dissolves and releases a mini-camera into your intestine. Using a magnet, doctors can move it around your body and take images. Nanorobots like these can be used to perform surgery from inside the organs. There are devices that attach to cancer cells and destroy them: this technology has already been used to cure a few patients. Cancer is like that: perhaps you only have a few cells of it, and they will grow into a tumor in ten years. Today, scientists are developing technology to help us find a single cancer cell among a billion of healthy ones. In the future, you may go to the bathroom and special sensors will use your biological waste to monitor for cancer cells. Perhaps the word “tumor” will become no longer relevant. We’ll be able to grow new organs, and even today we already have technology that lets us grow ears, bladders and tracheae. None of them will be rejected since they’re grown from your very own cells.

We’re just now starting to understand the nature of aging. We couldn’t understand why cells die off, but now we know that the cause is air, and namely oxygen, which prompts genetic changes in cells that cause them to die off. Scientists today try to learn how to modify genes and make cells immortal. Different cells also have different lifespans, and we all have a built-in “life clock”. We have the ability to stop that clock. There’s an enzyme that makes cells divide infinitely; the scientists who synthesized it were even given the Nobel Prize. So what’s the catch? Well, the enzyme has the same effect on cancer cells, as well.

Digitalization of the mind

Mapping the human brain might just be the next global research project akin to the ones that gave the world atomic energy and decoded the human genome. Even today, monitoring blood flow in the brain lets us verify various theories. For instance, Sigmund Freud claimed that the brain is in charge of libido, ego and the subconscious. People used to think him mad, but he was right. MRI scans show that all of human personality, i.e. the ego, subconscious and desires, are in the brain’s frontal lobe. Parents often think their teenage children aren’t right in the head. That’s also true: this very part of the brain is still underdeveloped in teenage children, making them prone to recklessness and risky decisions.

It used to be that we couldn’t confirm any of these claims, but MRI has let us see how the brain truly works. In the future, we’ll be capable of visualizing images from our mind and 3D-printing them. Perhaps we’ll print our dreams, and it might just become a new form of art. Or, say, we’ll text actual emotions instead of emojis, and our friends can upload them into their own brain through a special device. Imagine what an effect that will have on cinema if we’re able to experience the characters’ emotions. Telepathy. We already have prototypical examples of that phenomenon with prosthetics that can be controlled using one’s mind. Alzheimer’s disease patients will be able to record their memories and use a microchip to help them remember things. Basically, we'll be able to upload memory, just like in The Matrix.

There’s a Silicon Valley company today that will create a digital double based on your social media, bank records and other personal data. And that’s just a start. In a few decades, you’ll be able to create a precise digital copy of yourself. We’ll converse with the digital doubles of historical figures; I, personally, would love to chat with a digital Albert Einstein. Will the double be really you? Let philosophers deal with that. But whenever we achieve this, we’ll be right on our way to digital immortality.

Robotics are bound to become an integral part of life. Is that dangerous? Today, even the highly-advanced android Asimo has the intellectual level of a cockroach. If you leave a cockroach in the forest, it will look for shelter, food and a mate. If you leave an Asimo in the forest, it’ll just get lost. Soon, robots will be as smart as mice, then rats, then cats and dogs. Once they’re comparable to monkeys in intelligence, that’s when they get truly dangerous. Cats and dogs don’t understand that they’re different from humans: they think we’re just the leaders in their pack. Monkeys, however, know they’re not humans, they’re self-conscious. By the time robots become self-conscious, we need to implement some sort of an automated kill-switch. And if they find a way to circumvent that switch? Well, that’s a problem for the 22nd century. I believe we will merge with robots and become superhuman. We’ll have avatars, i.e. mechanical copies of our selves, while our personality will be stored inside a computer.

The three dangers to civilization

The first danger is if nuclear weaponry ends up in an unstable region of the planet. This is already starting to happen. The second is global climate change. It’s mild for now, but the effects can already be felt, and melting ice will flood many cities. The third is the threat of viruses, especially today when any school child can code one in the comfort of their home. All wars are waged by dictators and kings. Democracies have never waged wars. That’s why I believe in the development of democratic society, which the internet is helping greatly; people are starting to understand that they have the power to change things and need to take responsibility. Some say technology is immoral, but I believe that development of technology can work hand in hand with enlightenment and democracy.

A natural state of the human being is hunger. Ancient burial grounds show that citizens of the Roman Empire lived about 35 years. Before that, they barely got to thirty: their bones were exhausted from labor. People died of disease. Look at the Middle Ages: burning witches was normal practice for some. We’ll need to let democratic societies decide what to do with technology and immortality. Would it be ethical, for instance, to bioengineer our children? That’s a question for the future generations. We can’t hold them to our moral standards because we don’t know what their beliefs will be.