ITMO University has hosted the 8th Congress of Young Scientists. The aim of this event is to promote science, and especially the University’s areas of focus, among the youth. Among the participants of the Congress are not only students of Russian universities, but also school students from all around the country. Some of them shared insights into their projects with ITMO.NEWS and explained the challenges posed by their work. 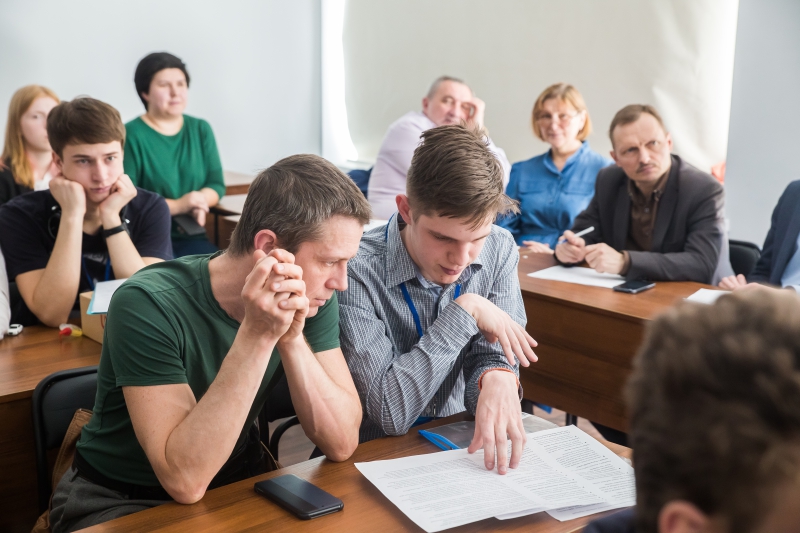 The 8th Congress of Young Scientists

I’m developing designs of an exosuit called Exofiz, as well as constructing a prototype. What makes my invention special is that you can use it even while deactivated. It also includes a number of novel solutions, such as a flexible spine or shoulder joints with a great degree of freedom for the wearer.

The exosuit will have applications in rescue and military operations. Its main purpose is to enhance the wearer’s physical capabilities and protect them. For example, rescue workers can use it to carry more equipment as well as remain protected from external factors. It’s the same for military uses: soldiers wearing the suit can install additional armor plates and carry more equipment. Its basic structure can also be used for pressure suits and aqualungs.

The most complicated part of this project was having to correctly place the joints so that they don’t conflict with each other. I’m almost done with the second prototype right now, and I’m also designing a 3D-model of the third prototype. I hope to secure permanent funding and start making the suit using composite materials and hydraulics instead of steel and pneumatics.

I’ve been working on this project for three years and I publish key updates on Exofiz’s VK page.

My project concerns a complex analysis of water used for drinking by the citizens of the town of Kondopoga. A survey has shown that many of the city’s inhabitants drink spring or bottled water because of its clear appearance and lack of smell. Tap water, on the contrary, has a yellowish tinge and smells of chlorine. But you cannot ascertain the quality of drinking water based simply on these qualities.

I decided to study the quality of bottled and sub-soil water from nearby areas. Last year, I studied the lakes in Kondopoga using the Ceriodaphnia affinis test species. I became interested in finding out how the physical and chemical makeup of water can affect this species’ lifespan. Perhaps there are even various behavior patterns of the Daphnia (small aquatic crustaceans) that depend on the properties of the water they live in? If so, it may be possible to assess the quality of water using the Daphnia. I conducted a complex study using water from five springs, from the tap, and bottled water under the “Karelian Pearl” brand.

The Daphnia are filter-feeding creatures. Based on that fact, I determined the difference in the presence of various chemical substances by comparing the properties of water before and after the Daphnia were introduced there. My project offers a response to some very relevant questions: what kind of water should the citizens of Kondopoga drink? And what is the most economically sensible method of assessing the quality of drinking water?

I’ve been working on this project for eighteen months; monitoring alone took a whole year. My tests showed that tap water was, in fact, the most suitable for drinking. I also found an alternative, economically-beneficial water testing method that involves Ceriodaphnia affinis. I plan to continue studying various types of bottled water, as my research has shown that the amounts of certain elements in bottled water may sometimes exceed the allowed limit.

I also want to study various filter types, as boiling has only proven useful as an alternative water treatment method. It removes an excess of organic substances and protein molecules, but its effect on other substances can be unpredictable. Moreover, boiling often results in the concentration of substances and the alkalization of water.

Our project revolves around a conveyor line that uses machine vision to sort items by their visual appearance. As a current example, our system is able to sort bottle caps by color. The algorithm can also be adjusted to check for external flaws and to sort items by size.

Because of its modular nature, the project can be customized for various tasks and production types. We also plan various additions, such as other modes of inspection and more adjustable parameters. Our project provides a solution to the task of sorting and inspection of products that are sensitive to external input. It also makes inspection more accurate by fully eliminating the human factor.

We’ve been working on this for three months now. The development process was split into three segments distributed among the three of us, and each had its challenges. For instance, the software part had its difficulties from the very start. The first challenge was learning Python. Then, issues with the stability of our Raspberry pi3 microcomputer caused troubles for the entire team, which is why we decided to use a regular PC instead. Another, smaller issue was the fact that all of the documentation for the machine vision tools was in English, which made the development time longer.

A key issue in terms of engineering was that we had to learn how to use the NanoCad software, which was a new tool for us. Then we also had to spend quite some time learning the National State Standards on construction drawings. A big challenge in terms of organization was having to plan our efforts properly and maintaining that level.

My project is a career guidance bot called Bot Knows that operates as a community page on VK. The bot helps school students choose their future career by asking various questions in order to understand their interests. All you need is internet access and a personal account on VK. You just open its page, click “Send message” and start a chat.

Today we’ve got a whole team working on this project, including founder Yana Sedunkova, psychologist Tatiana Klimova, and many others. I’m the developer. I joined the project in the summer of 2018 when I was taking a career guidance test at ITMO University. I decided to join the project because I enjoy creating bots, and working on Bot Knows gives me a lot of experience.

I wouldn’t say that there were any insurmountable obstacles, but I did have to spend several days on the algorithm that calculates a test subject’s most fitting occupations. The bot can nearly “finish others’ sentences” and ask questions about 20 different career fields. In the future, we plan to teach the bot to share information about the students’ potential careers: their basic description, how popular they are, how much demand there is on the job market, and so on.

My project is called “Mathematical Modeling of Space-Time Parameter Changes in PQ/PMMA Samples During Exposure”. In essence, this is an attempt to improve the quality of recorded holograms. To produce a high-quality hologram, you need to ensure the complete stability of the recording medium and the interference pattern during recording. Any vibration that causes even a micrometer shift will result in reduced quality of the image.

But what if the recording medium itself “shifts” due to the radiation? The energy transmitted by a laser not only activates the chemical changes in photosensitive elements, but also heats up the sample, with results in a slight increase in the thickness of the recording medium. This was not brought up before because the effect was negligible due to the low sensitivity of recording mediums used for 3D-holograms and the low intensity of lasers. But the times change and as lasers become more powerful, we cannot ignore the effects of heat anymore.

A few years ago, scientists from ITMO University conducted research and learned that this expansion may be up to several micrometers in size. Seeing as the period of a reflective hologram may consist of a few tenths of a micrometer, the heat may have a significant effect on the results.

In my work I study the heat-induced expansion of samples during exposure and, I must say, I was able to find some interesting patterns that, I hope, will help us pick the right properties of lasers and recording mediums, as well as the conditions of exposure when recording holograms. This is very important from the economic point of view, as well, as high-quality holograms are made using expensive materials.

As I’ve already noted, these materials are fairly expensive, so using them in lab conditions (in experiments, for example) is wasteful. But we can use a cheaper material, estimate the desired contrast of our future hologram and calculate the parameters of exposing radiation. I began my project in the summer of 2018 after taking part in ITMO University’s Summer School at the Faculty of Photonics and Optical Information, where I met my future scientific advisor, Olga Andreeva.

As for the challenges of my work, I can only note one: it’s necessary to understand the physics of this process very well and to be able to consider it from a mathematical perspective. We work on the nano- and micrometer-scale, so even one millimeter is a lot. It was hard to adjust to at first, because it’s not often that you think about this kind of scale in everyday life.