16 years ago, ITMO hosted the first inter-university conference for young scientists. At that time, it brought together about a hundred participants, and its program featured six sections only. With time, the conference attained national recognition and the status of a congress. Last Monday it was the opening of the 8th Congress of Young Scientists, featuring 49 sections, 11 sessions of science schools and 7 school sections, as well as a report contest whose winners will get the opportunity to join ITMO’s Master’s programs without entrance examinations. This time, the event brought together over 2,500 young scientists and students from 200 educational establishments from 45 Russian cities and 10 cities of the neighboring states, as well as 200 school students and representatives of 20 enterprises. 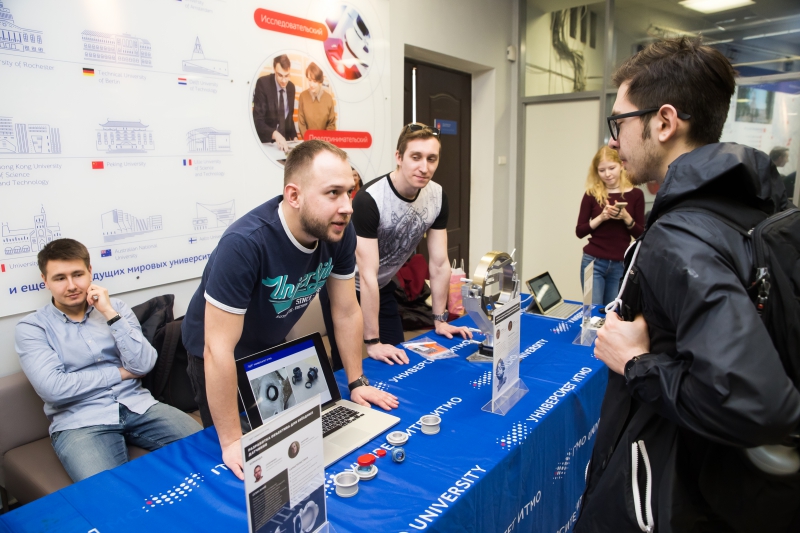 Opening of the 8th Congress of Young Scientists

The general session of the 8th Congress of Young Scientists was opened by ITMO Rector Vladimir Vasilyev. In his speech, the Prof. Vasilyev spoke about the important changes that now set the general trends in the development of Russia's scientific community.

“The 8th Congress and the discussions that will take place here are most important, as last year, we’ve defined the key national projects that have to do with our work, particularly the projects related to science, education, digital economy, healthcare, etc., in accordance with the President’s “May orders”. In one way or another, almost all of the 12 projects imply conducting research and introducing results of intellectual activity into end products and services that will affect not just the population of our country, but possibly humanity as a whole, as science is international, and can not be isolated,” commented Vladimir Vasilyev.

According to the rector, the nation’s leadership places a key focus on young specialists. As for facing the new challenges, it implies an interdisciplinary approach and the involvement of representatives of various sciences.

“It is essential that we place a focus on young specialists when pursuing the trends set by the national projects. For example, the “Science” national project declares a very ambitious goal: by 2024, the amount of young scientists in research teams has to be no less than 50%. This bespeaks of the focus that the country’s leaders place on the youth,” he added.

During the opening of the 8th Congress of Young Scientists, a pitch session took place where some of ITMO’s researchers shared about their research.

Oleg Borisov, a PhD in Technical Sciences, a research associate at the Faculty of Control Systems and Robotics, and a PhD student Ivan Borisov spoke about the robotic intelligence that can be attained by merging hardware and software.

Researchers often implement the unique abilities of living beings in their robots: adaptability, heightened senses and energy efficiency. From an engineer’s standpoint, a human hand is a complex instrument that can adapt to the shape of objects it manipulates and perform both precise and strong gripping. This very idea was used in the development of a multipurpose gripping device for industrial purposes as part of one of the two projects that ITMO researchers conducted in collaboration with TBA Robotics.

At the prototyping stage, the researchers developed a model that could perform precise and strong gripping. It had fingers that could adjust its aiming and the number of the degrees of freedom which made it possible to adapt to the form of the objects it manipulated. On the next stage, the developers solved the issues of sensing. For particular reasons, it is impossible to increase the number of physical sensors in order to attain human-like abilities, so physical sensors were replaced by smart algorithms that allow to enhance the robot’s ability to interact with the environment without using the associated force/torque sensors. This kind of a solution allows scientists to solve physically unfeasible tasks by using advanced software, i.e. improve a robot’s operation scenarios without sophisticating its design.

“Another quality that we imbued our system with is energy efficiency. We take ideas and elements from living organisms and apply them in robotic systems. For instance, we work on the methods for analyzing mechatronic systems based on energy transfer, which is the working language of the elements of a mechatronic network. You see, a robot runs not because we send a signal, but because energy has been transferred from a battery to the electric engine, then distributed among the mechanic parts, and then dissipated the moment they hit the floor or stored in flexible elements,” explained Ivan Borisov.

Elena Koshel, a PhD in Biology  and an associate professor at ITMO’s ChemBio Cluster, spoke about innovative approaches to treatment and diagnostics of infections.

Humanity develops in a cradle of microorganisms. Today, we face two serious problems that have to do with infections. The first one is antibiotic resistance (resistance of a strain of infectious agents to one or several antimicrobial drugs). According to the current forecasts, if humanity doesn’t take action, by 2050, we’ll exhaust our arsenal of antimicrobial drugs, and we’ll have no means of fighting bacteria. It may even be so that people will start dying from simple opportunistic infections that pose no threat to us now. By the way, if a person takes antibiotics, they should always do the full course, otherwise they become incubators for new antibiotic-resistant strains. In most cases, it is in human organisms that they emerge.

The other problem has to do with microorganisms that exist as biofilms. Biofilms are “bacterial cities” where different types of microorganisms coexist. In biofilms, microorganisms can effectively exchange genetic material. As a result, we get antibiotic-resistant strains.

“Bacteria are very social, they like to help each other, so, when threatened by something, an antibiotic, for example, one bacteria asks another for help, and it shares its instruments in the form of DNA which has gene cassettes of antibiotic resistance. The problem of biofilms is an acute one, people still die from them, even in cases of infections that pose no threat (like staphylococcus or E.coli). Those are opportunists that are always around, but when they settle in our organisms as part of biofilms, they become deadly,” explained Elena Koshel.

The projects by the microbiological team of ITMO’s ChemBio Cluster aim to solve both issues. For one, the scientists study functional materials that are efficient against biofilms and antibiotic-resistant strains. They have already developed a magnetically operated material that can effectively solve the biofilm problem: thanks to it, the antibiotic accumulates near the inflammation locus and eliminates the biofilm. The researchers also work on the issues of protecting implants and biotic devices that are introduced into organisms.

Another field of research has to do with bacterial strains that are genetically modified for treating various diseases, including oncological ones. In collaboration with the Laboratory of DNA Robotics, the scientists develop innovative diagnostic and treatment systems based on the DNA origami technology. This project makes use of DNA sensors that provide for an opportunity to effectively destroy nucleic acids of infectious agents and use this approach for treating oncological diseases.

“DNA robots provide for a high precision of identifying and exposing the presence of various pathogens in our biological media, which can be used in the development of new diagnostic test systems. A separate trend has to do with the development of genetically engineered bacteria based on probiotic strains, i.e. strains that are beneficial for organisms, that will effectively treat particular diseases, colorectal cancer, for instance when taken by ingestion,” said Elena Koshel.

Vladimir Ulyancev, a PhD in Technical Sciences and an associate professor at ITMO’s Information Technologies and Programming Faculty, spoke about a project on creating a genetic algorithm conducted in collaboration with the University of Washington.

According to Darwin’s theory, after every species is born, some of them grow up and breed, and others die, which is associated with their inadaptability to the surrounding environment (i.e. it is the adapted who survive). Since the emergence of computers, there have been attempts at modeling this evolution. In the 1950-1960s, researchers proposed using the direct search method. We select part of a species from the current generation based on their adaptability, i.e. model this adaptability, and form the next generation by modeling breeding and mutation. In other words, we model a process similar to the one that takes place in nature.

“Darwin illustrated his book with a picture of a phylogenetic tree that reflects the evolutionary connections between different species and other entities that have a common ancestor. People have always been interested in how life split down into so many species, why and when humans separated from grasshoppers or chimpanzees. This is what phylogeny studies. Now, with the emergence of genetic technologies, looking into our past has become possible. By using sequencing, we can not just draw a phylogenetic tree, but build a phylogenetic model, which can tell us when and how our populations developed. In this case, those are populations of white, black and yellow-skinned people. According to modern theory, all of them once split from black people," noted the scientist.

In recent years, we’ve taken on the biologists who develop such models, and proposed a genetic algorithm that allows to reconstruct evolution automatically.

"We developed an algorithm for reconstructing the demographic history of the human population. The difference between the models that human researchers and the algorithm offer is barely noticeable, which means that we’ve succeeded in getting the same or even a better result,” comments Vladimir Ulyancev.

Among other speakers for the pitch session were Arthur Gleim, PhD in Technical Sciences and the head of the Laboratory of Quantum Informatics with a report on quantum communications for cyber-physical systems, Anastasia Yarmosh, PhD in Art and the head of ITMO’s Art & Science Center with a report on arts in the modern innovative praxis of scientific organisations, and Andrei Kulikov, PhD in Technical Sciences, an associate professor at the Faculty of Laser Photonics and Optoelectronics with a report on optical fibres.