Isabella Merkulova and Mariia Kokaiia work together at Panoramik GameDev Studio, and recently they started the YouTube channel DEVchata (a pun on the Russian word for “gals” – Ed.). The co-hosts conduct interviews with experts from the IT world and discuss the industry's concerns. ITMO.NEWS talked to Isabella and Mariia to find out about the channel’s history and plans. 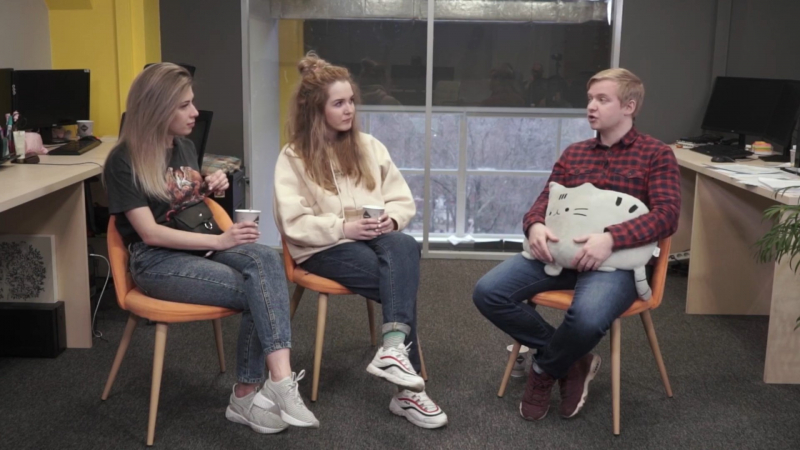 Isabella is a third-year PhD student at the Faculty of Control Systems and Robotics, as well as a lead backend developer at the game development studio Panoramik, where Mariia is a team lead of the backend department.

Who came up with DEVchata?

Mariia: It all started last fall. My boyfriend shared that he wanted to start a YouTube channel. Then I thought I could have one, too, to talk about IT, for example. We looked up what is already there and realized that there are very few interesting interviews with industry experts, developers, and other specialists in this field. That’s how we decided on the format, but I understood that I couldn’t do that alone, so the next morning I offered Isabella to work on a channel together and she agreed.

Your first video was uploaded in July. Does that mean the project was conceived during quarantine?

Mariia: It wasn’t. The official start date is November 1. The idea came up in the fall. It was then that we filmed the first episode with our colleague, the team lead of Panoramik’s Customer Department, as a guest. When we put together the video, we showed it to our fellow colleagues: Zhenya, an artist, and Dima, a creative artist. They watched it and said that it was horrible, but they would not leave us and would help. Since then, the four, or rather the six of us together, have been making new episodes. My boyfriend helps – it was him who came up with the channel’s title – and there is also Dima's friend, Misha, who edits the videos.

Is it important that the channel is hosted by two girls from the IT field?

Isabella: Originally, it was meant to be a highlight, so yes.

Mariia: Of course! The channel is called "DEVchata". We wanted to show the industry’s openness, and that the stereotype “IT is for boys” is not at all relevant anymore, so girls have nothing to be afraid of. It's interesting and just great here!

Are there really no YouTube channels with IT interviews?

Mariia: We didn’t find any, though maybe there are foreign ones. Among popular IT content we prefer Podlodka podcasts, recordings of Oleg Bunin's conferences, but there are no interviews.

Isabella: We decided that it’d be so unusual: two girls from IT. We are the show’s experts, as well. Moreover, it was important to focus on live communication: our faces and emotions on camera are priceless. Now we are thinking about creating a podcast version of our interviews, but that is still in the plans.

Perhaps there are no interviews because IT people don't like this genre?

Isabella: According to our modest statistics and observations, programmers watch video interviews or listen to podcasts at least as much as people of other professions, and often professionally even more. Experts spend a lot of time in front of the screen, playing video and audio interviews in the background. That’s why we are thinking about a more convenient audio format for them.

Who films and edits the episodes?

Mariia: Preparing for an interview takes a lot of time: we call up the guests, brainstorm questions, discuss them several times, so if we had edited ourselves, the videos would come out very rarely.

You invest time, money, involve friends and colleagues – why? Is it just fun or is there some kind of meta-goal?

Mariia: Of course, we would like fame and fortune, but so far it's about enthusiasm. We have a good team and we are having a great time. When I go too far, Isabella always says to me, "Masha, we are doing this for fun".

Isabella: I'm saying it because it really is fun. Some guests move us so much that it's hard for us to let them go after filming. It happened with Ilya Zelenchuk, the founder of the Russian Competition in Information Security and the BigXP project. When the cameras were off, the four of us swarmed him and asked additional questions for another hour.

So, does your motivation lie in finding interesting acquaintances and learning their unique experience?

Isabella: Yes. It is communication with colleagues who help create episodes, and of course, with guests. We learn something new, too, and share it with the world.

Mariia: In other words, we grow professionally and help others to do it, simply because it is impossible not to with such experts.

How do you pick topics, choose guests?

Isabella: There are a lot of topics in the IT industry. For now, we choose what is close to us, what lies on the surface, invite colleagues and familiar experts. So, there are no problems with the choice of topics, there are only problems with finding time for filming.

Some interviews were filmed in a studio, others were recorded online via Zoom. What were the differences?

Mariia: We like both formats. Naturally, Zoom has become a necessary measure, but now we think we will leave this practice for special cases and experts. There is something in it. In a studio, there are completely different impressions: live communication with a person, you have more time before and after filming just to talk, tune in. On the other hand, you have more responsibilities as well.

How do your colleagues and friends in the industry feel about your initiative?

Mariia: They help and support us a lot. We invite them to the final screenings, they give their feedback, suggest how to improve an episode to make it more interesting.

Two hosts – is that good or bad? Do you share roles?

Mariia: Two hosts with different worldviews are good. We look at things a bit differently, so we ask different questions while improvising, which means we explore the topic even more broadly.

Isabella: As for the roles - we are still working on it. For now, we ask questions in turn, but we want to develop our skills in interviews, including in pair work.

How would you describe "DEVchata" for those who have not heard about the channel yet?

Mariia: This is a channel where we interview cool developers and industry figures.

Isabella: It's about IT. Here, experts share their experience, help to dive in, learn more about IT, understand what their industry colleagues do. In fact, some of the ideas for the episodes arise precisely with the aim of acquainting IT specialists that work in different branches. Once, a friend of mine from ITMO University asked me what server developers do in gamedev. Even though he is a developer at a huge research institute and codes in C++. I was very surprised, because he was no slouch in IT, but then I realized that IT is a big field, and here you can easily not know what your colleagues from the other fields do.

So, is your channel mainly for pros?

Isabella: Not really. Some episodes – yes, but not all. For example, the other day we uploaded an interview about Agile, Kanban and Scrum. I showed it to my mother, who said, "This is exactly what they wanted to implement at our dental firm." Then, she showed this episode to her colleagues so that they could think together about the ways of integrating this system better.

Mariia: We will definitely make content for professionals, but there will also be topics for a wider audience. In the 21st century, IT is everywhere, so there are some terms and tools that you just have to know.

What should we expect from the channel in the near future?

Mariia: We would like to experiment with other formats, such as discussions and round tables.

Isabella: Interesting guests and topics. We have a whole list, so we just have to keep working and working.