On the 256th day of each year, programmers from all over the world celebrate their professional holiday. On this occasion, ITMO University hosted an online festival with music, prizes from VK, games, and popular science lectures. 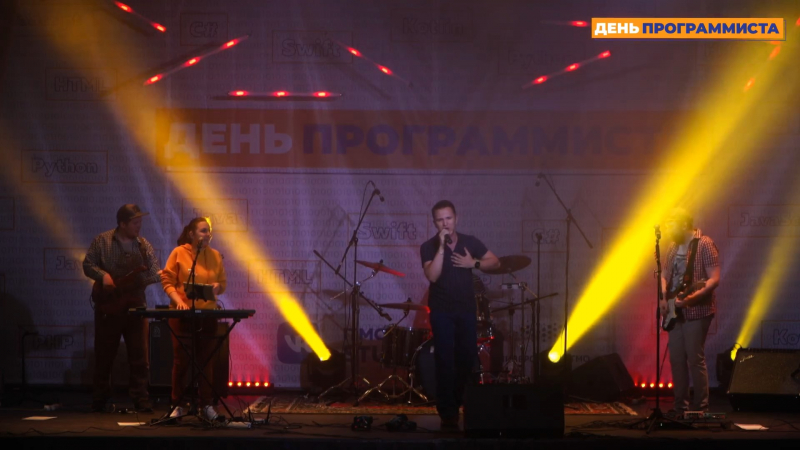 Main broadcast: a record number of views and a lot of music

The Programmer's Day Festival at ITMO University was held online on September 12. The event was divided into four different zones: the main broadcast (live music and presentations of ITMO University’s Accelerator, Career Services Center, and Technopark representatives), a programming championship with specially designed tasks from Codeforces developers and prizes from VK, a lecture hall, and a platform with mini-games.

The main broadcast ran from 12 to 3:30 pm – with about 300 people watching it live. And today this figure has exceeded 500,000 views, which made this video the University's record holder.

There, ITMO students had the chance to learn more about their key career options and how the Career Services Center, Accelerator, and Technopark can help them grow into strong and sought-after specialists.

In between, students had the chance to hear the music bands Mnogoe Drugoe (Многое другое), Benedict Coverband (Бенедикт Кавербенд), and Junior Prime.

The Festival’s programming championship took place on the Codeforces platform. Students were offered eight tasks, and the winner had to solve more problems in less time.

Semen Markov won the championship and received his reward – a smart capsule with Marusya voice assistant. Those who took second and third place became lucky owners of Huawei Band 4 fitness trackers from VK.

The next zone included such mini-games as PYTHON, @IT-REX (you could earn points by overcoming obstacles with a virtual dinosaur on the error page), QWERTY (for programmers-turned-architects ready to construct the most unusual towers from keyboard buttons), COVID-19 (a game that has been extremely popular since this spring), and CTRL+F (where you need to find all hidden words in one minute). The highest number of points was scored by Asiya Ermolaeva, Anton Popov, and Maxim Vileev, who took 1st, 2nd, and 3rd places, respectively.

Each student could find entertainment to their liking: discuss their future career as part of the main broadcast, solve time-limited tasks and challenge themselves, get stuck in mini-games, and the most creative ones could even make a video about the world of IT and programmer stereotypes.

Programming in art, VK, and ITMO

Alongside the main program, everyone could join an online lecture hall. On that day, the main topics were the Avatar of ITMO University, programming skills in art, and IT professions at VK.

Lidia Perovskaya, a staff member at VK, described in detail the range of tasks of a designer, web, and mobile developer at VK. She explained what a project manager, analyst, tester does, and what people are needed to develop the AI ​​sphere. Lidia emphasized that despite the generality of the term “programming”, IT is a huge industry, where it is not so easy to find your own narrow specialization. But to do this, you need to follow your interests, as well as practice more and do more internships. You can find the offers from VK here.

But the most peculiar presentation was given by Maria Moschenskaya, an interdisciplinary artist, who demonstrated that programming can be beautiful.

She showed how artists use IT to rethink reality, predict the future of architecture or restore monuments of the past. A striking example of working with data is Refik Anadol's project. For his Bosphorus work, he monitored the activity of the Sea of Marmara in Turkey for 30 days.

Observation and analysis of programming make it possible to reconstruct lost fragments of antique sculptures, as well as generate potentially possible art objects of that period based on data processing.

IT is widely used in architecture, and not only for the sake of art but as a real tool. For example, in parametric modeling.

David Bowen’s Tele-present wind is a remarkable example of the synthesis of engineering, art, and programming. In his home state, Minnesota, he installed a dried flower with an accelerometer. An installation of 22 such flowers travels the globe. When the wind in Minnesota shakes the stem, the accelerometer receives data on the flow strength and direction and then transmits this information over the Internet to the flowers in the installation. Thus, anywhere in the world, flowers sway only from the Minnesota wind.

The Festival ended with a wrap-up of the competition and awarding the winners of draw games, contests, and quizzes.