A Secret Guide to Pushkin

The next stop on our tour around St. Petersburg’s former royal residences is Pushkin – the town of a prominent poet, French and English gardens, and the mysterious Amber Room. 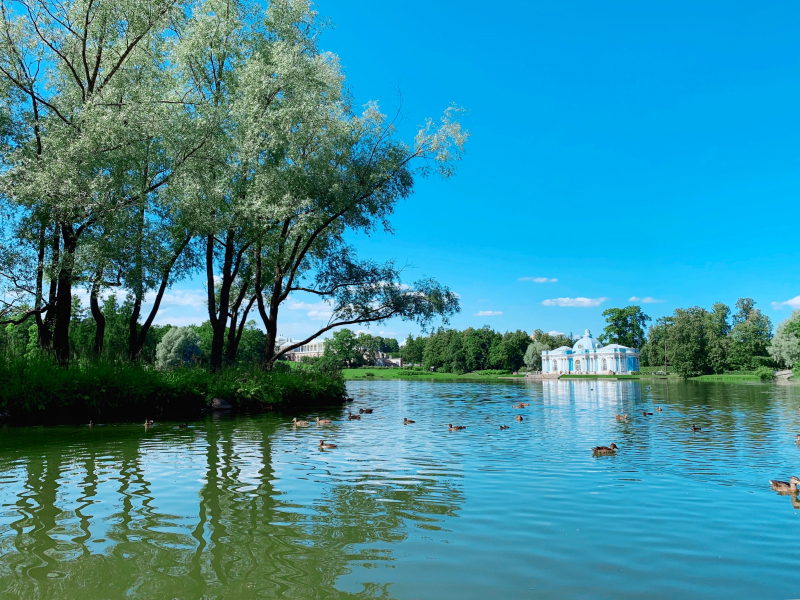 Just like Pavlovsk, Pushkin or Tsarskoye Selo (this name’s still around on train tickets and announcements, buses, etc.) was founded as a royal residence in the early 18th century. Back in 1710, empress Catherine I received this land as a gift from her husband Peter the Great and then bequeathed it to Elizabeth Petrovna who turned the town into a palace-and-park complex in the Russian Baroque style.

Many prominent architects had a hand in creating the unique character of the town (e.g., Francesco Bartolomeo Rastrelli and Giacomo Quarenghi) for it to become an attraction point with grandeur palaces and parks, the first-ever railway, and the widely-known lyceum attended by numerous notable figures, including poet Aleksandr Pushkin. Tragically, the town didn’t escape German occupation during WWII and suffered frightening human and cultural losses. Even despite that, the town was restored and continues to delight its residents and tourists with picturesque landscapes, striking architecture, and history at every corner.

The most convenient way to get to Pushkin is by bus No. 186 from Kupchino metro station (60 rubles). You can also take a train from Vitebsky or Kupchino railway stations (55-57 rubles with a 50% student discount from September to June). However, the railway station is a bit far from the main attractions so you will need to get on a bus (buses No. 186, 370, 545, etc.) or take a 30-minute walk to get downtown.

NB: the public transport reform is still in the making in St. Petersburg so it’s worth double-checking when heading to a new location.

What to see: parks and nearby locations

Here is our handy map to help you get around.

Train or bus, you’ll probably rush right away to see the town’s main gems – the Catherine Park and Palace. While during winter the park is free, in summer, you’ll have to pay 170 rubles (90 rubles for students) to stroll around it or 1,500 rubles (750 rubles for students) if you want to get into the palace and visit the park, as well. Spread across more than 100 ha, the Catherine Park is a popular walking destination richly populated with natural and architectural wonders: scenic bridges, historical pavilions and other palace buildings, mesmerizing sculptures, and so on.

Yet a true gem of the park is surely the Catherine Palace. Once a modest two-story building, it evolved into a palace of grand beauty and scale. With its blue-and-white facades and gilded decorations, it makes a true pearl of the complex (though, odds are you’ll think of the Winter Palace first as you see it). The insides of the palace are not less impressive: the Grand Hall, the Grand Staircase, the White Dinning Room, and, of course, the Amber Room. Known as the Eighth Wonder of the World, the Amber Room was constructed in the 18th century only to be dismantled during WWII and sink into oblivion after the war. What we see today is a replica that appeared only in 2003.

Yet Pushkin is also called the town of parks (there are five of them!) for a reason. In addition to the main complex, you might want to take a stroll through the nearby Alexander Park (the entrance is free). Though the Alexander Palace has been under a massive reconstruction since September 2015, the park is still great for a peaceful nature walk and architecture watching.

The town’s downtown is just as generous in places to see. When getting to know it, make sure not to miss Pushkin’s Gostiny Dvor (right, just like in St. Petersburg), Catherine Cathedral, which was brought back to life only in 2007-2010, and Lutheran Evangelical Church.

In between exploring different parts of the town, stop by a local restaurant or a cafe to learn what the town has to offer. Luckily, there’s everything from freshly-baked pastries and various delicacies to mouth-watering burgers, pizzas, and kebabs.

What to see: around the town

If you decide to travel a bit further (still walkable), you won't be disappointed either. Whether south or north, you can enjoy a bit more “wild” nature (the Buferny and Nizhny parks) and witness an Egyptian gate (a former custom guardhouse) or a classical one at the town’s entrance roads, or even a castle-like cantonment (former military barracks) called Pokrovsky Gorodok outside the town’s center.

Want more ideas for a perfect getaway? Check out our articles about a former residence in Pavlovsk and our travel guide with nearby on-budget destinations.