The Magic of St. Petersburg Philharmonia

From an incredible orchestra to crystal chandeliers and chocolate truffles during intermission, Saint Petersburg Philharmonia is both a treat for music lovers and a quintessential Petersburg experience. 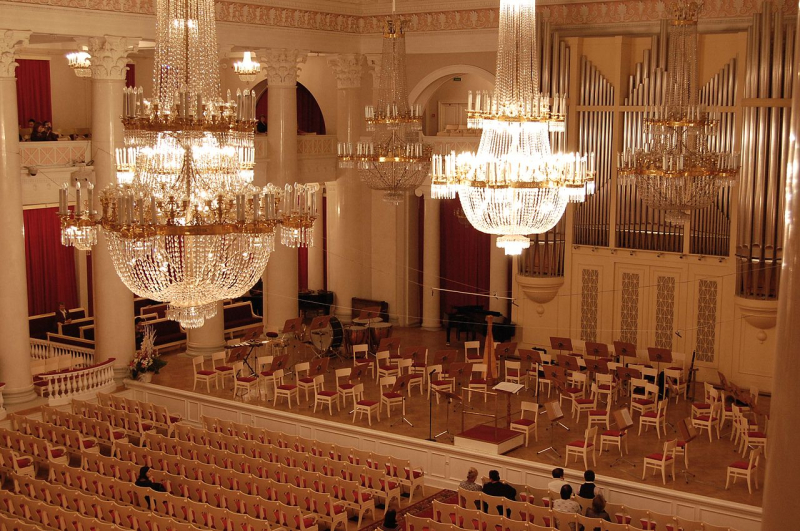 “You’re going to wear white tights and a plaid dress”, announced my grandma in preparation for our visit to The Philharmonia. I was eight years old and we were going to see Peter and the Wolf, a “symphonic fairy tale for children” by Prokofiev.

“But it’s so muddy outside,” I said. “How am I going to keep my tights clean?”

“You’re going to wear ski pants over them before we get there,” said grandma.

She put on her herringbone wool suit that she kept for special occasions, gave her freshly curled hair a gentle brush and put on the diamond earrings she’d inherited from her mom.

My grandma had been going to the Leningrad Philharmonia (now called the St. Petersburg Philharmonia) her entire life and wanted to make sure that I did, too. At some point, she held several season tickets (a ticket to a series of concerts united by the same theme), which she used to bring along her various girlfriends; and sometimes my reluctant granddad.

Now it was my turn.

One of the many things I always liked about the Philharmonia was that it’s close to the metro. You emerge straight onto Nevsky Prospect, then walk past the regal Hotel Europe with doormen in topcoats and get to take in the beautiful Arts Square before you find yourself in front of heavy wooden doors with golden handles.

As a little girl, I didn’t care about any of that. What I cared about was how magical I felt going up the red carpet of the marble stairs under the giant class-cut chandeliers. Famous composers of the past were looking down on me from their frames in the hallways. I could draw with my finger on the soft velvet of the seat cushions. People around me spoke in hushed tones and seemed to glide along the gilded hallways. It was as if I was transported to a different time and place.

We’d take our seats. The orchestra, all decked out in black and white, would take their seats. For a minute, they would tune their instruments and I couldn’t believe that in a second this noise would transform into music that would make me shiver. “Remember,” grandma would instruct, “hold on to the program note and see how many parts there are to a piece. Clap only at the end of the piece, not in the middle. That’s impolite.”

The conductor would take his place on the podium, lift his baton and…

Over the years I often wondered why this orchestra always seemed different to me compared to just about every other orchestra I got a chance to enjoy. Perhaps because they do this several times a week and not just on special occasions, they sit down to play like they just showed up for work. They’re focused, and professional, and to the point. There’s no fake over-exuberance or trying too hard. Yet at the same time, the force of their work is incredible. It’s like they tap into some universal energy source and let it flood the concert hall.

When my husband first came to Russia, I brought him to the Philharmonia not just to listen to a world-class performance but also to share this truly St. Petersburgian experience. We opened the heavy oak doors, we surrendered our coat at the cloakroom, he watched me change into lacquer shoes, we walked the stairs and took in the Grand Hall. We even got the mandatory truffle chocolates at the buffet during the intermission. But what happened in the second half changed our expectations of how classical music can be forever. The orchestra started Mussorgsky’s Pictures from the Exhibition and when they got to the Great Gate of Kiev, the Admiralty Brass Band came in with horns and trumpets that made the chandeliers shake. Drums, bells, and timpani brought the intensity of the piece to an exuberant, thundering crescendo.

This year, my sister and I are going to see “Hollywood in New Year’s St. Petersburg”. I wouldn’t miss it for the world.