ITMO’s Intelligentsia Culture Club: Be Kinder to Others and Never Fear Change

We all know that St. Petersburg is a city where culture in all its diverse shapes and forms can be found in abundance – what with all the libraries, theaters and museums that surround you literally every time you go out for a walk. Sometimes it feels like the magic of its theaters, museums and libraries can only be discovered by the trusted few. Well, those at Intelligentsia, ITMO’s culture club, happen to know just how to break this uncanny spell. 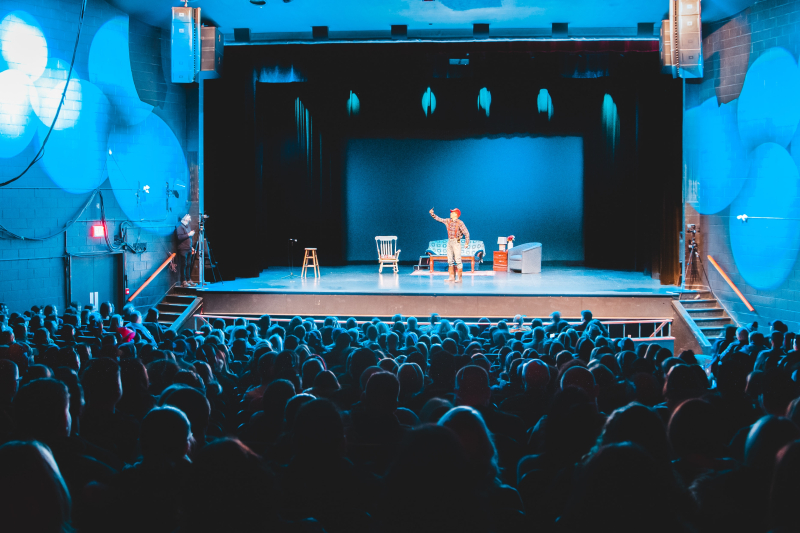 Now, before we start, here’s a short fun fact about the intelligentsia. Originally, this term was used to describe a class status of highly educated people engaged in mental labor and thus playing a huge part in shaping the culture and politics of their country. It’s not a term to be often heard in conversations these days, but when it does come up, it’s usually meant to allude to intellectuals who work in education and are connected to the creation and distribution of knowledge.

For this interview, I caught up with Karina Mavletbaeva, the head of Intelligentsia and a soon-to-be Bachelor of Food Biotechnologies.

Let’s start from the very beginning. How did you come to Intelligentsia and why?

When I was in the second year of my Bachelor’s degree, Diana Khrustovskaya, who was the head of Theater club (which would later turn into Intelligentsia – Ed.) back then, offered me to take her post while she left on a semester exchange. At first, I thought it would be a temporary arrangement, but I am still here two years later.

What was the idea that led you to starting a culture club? How would you describe what you do?

Upon its creation, ITMO’s Theater club primarily focused on providing discount tickets for ITMO students. Later, as the student club system was rehauled, we changed our name to Intelligentsia and developed our own style, welcoming new members who helped us expand our agenda with more activities.

Our aim is to organize cultural entertainment for ITMO students and staff members. We are based in St. Petersburg, after all. I come from a small town in Bashkortostan, where we only have guest performances of major theater companies once a year. I know that a lot of students come here not only to study, but in hopes to see the legendary Swan Lake at the Mariinsky Theatre or Three Sisters at the Tovstonogov Bolshoi Drama Theater.

Not only do we attempt to become a bridge between students and the world of theater, but we also host our own cultural events. These days, you can choose between visiting some of the best theaters and concert halls of St. Petersburg or taking part in one of our free events or competitions.

Scrolling down your VK page, I found a lot of announcements for discounted tickets to various theaters in St. Petersburg. How do you organize this part of your club’s work?

Theatre club had partnered up with several theaters before I became its head, but we are constantly establishing new partnerships – we don’t only contact theaters, but also collaborate with dancers, actors and directors who host workshops. For instance, we have recently run a viewing of world-renowned paintings hosted by Rodion Yuriev, a screenwriter. The many libraries around the city help us with our bookcrossing activities. Collaboration doesn’t always have to involve the exchange of something material.

Mr. ITMO Danil Krylatykh is responsible for new partners and collaborations. We at the club like to remind everyone that we’ve got a Mr. ITMO representing us.

All our collaborations are built on mutual benefits and some core negotiation principles. New places need their audience who will later visit them even without the student discount. Major theaters might not need the extra audience boost, but they are willing to collaborate with educational purposes in mind.

How do you divide responsibilities within the club? Is it hard to become a member?

There are seven of us now. Four people are responsible for communication with our existing partners. Apart from that, everyone has their own domain.

As I’ve already mentioned, Danil Krylatykh finds new partners. Veronika Varik curates our collaboration with existing partners to ensure every program is published on time and none of them is left without attention. Georgy Semyonov handles the incoming ticket applications from our students and staff. Maria Kapridova is our designer, while Olesya Mayorova and Daria Zvyagintseva come up with our own events, such as photo exhibitions or a short film competition. And my responsibility is making sure that everyone is doing what they like most.

It is important for us to know what a person wants to achieve and what skills they can get from working at our club.

Do you host any regular events? Tell us a little about them.

Art is quite a broad subject, so it would be unwise to repeat ourselves here – we would be facing a risk to fail at representing some of its key forms.

We have, however, organized bookcrossing four times. We turn it into a little adventure. You come in with a book you’ve read and wrap some blank paper around it. Then you have to describe it in such a way that would make people choose it because of what you’ve written instead of simply going by the title.

Every Wednesday last semester, we took a journey through the history of Russian cinema, starting from the very first film and going all the way to the introduction of sound and color. We were very pleased to see international students at these screenings.

This semester, we’ve decided to host a mobile photography contest. Stay tuned for more information to come up on our VK page.

We all know there’s quite a few student clubs at ITMO. Do you ever collaborate with any of them?

We try to promote such collaboration in any way we can.

For instance, ITMO.GREEN and the Phoenix Literature Club are our bookcrossing partners. ITMO’s Cameo Theater Club helped those taking part in our reading contest to boost their confidence on stage. If it wasn’t for Megabyte Media, there would be no pictures to document any of our events.

On March 13, we are organizing a debate on culture together with ITMO’s Debate Club. Right now, we are also getting ready for an event we’ll host with the music club Live Sound.

Student societies of many universities around St. Petersburg spread information about our competitions and this support means a lot to us – many students from other universities admit they don’t have such a club when they come to our movie screenings or workshops.

What are some of your recommendations for cultural experiences in St. Petersburg?

Not many people know the Gorodskoi Theater, but their performances are always a breath of fresh air. The Student Theatre on Mokhovaya is the place where you can see the soon-to-be stars of the Russian stage. They say that your graduation play is the most honest one you will ever direct.

This February, I was swept off my feet by the Dali exhibition at the Moscow Manege. It is coming to St. Petersburg in April, but I couldn’t wait. I would definitely recommend visiting it.

All the bookstores in St. Petersburg are wonderful, but I try to favor bookcrossing and libraries when I can help it. It feels great to share.

What would you say to someone wishing to be part of the intelligentsia?

I am not sure I can talk for the intelligentsia. We chose this term as a name for our club meaning the people who find cultural enlightenment and education important. I think they are the true intelligentsia.

So, I am not talking for the intelligentsia, I am talking as myself. I wish everyone to be kinder and more patient to others, never compare people, and never fear change.

If you want to dive into the wonderful world of culture in St. Petersburg right away, we would recommend to start this journey with our stories on unusual theaters and the best places to enjoy classical music in the city.