You might already know that St. Petersburg is renowned for the fascinating natural phenomenon of white nights. But what are they, and what is it that makes them so special? Let’s find out. 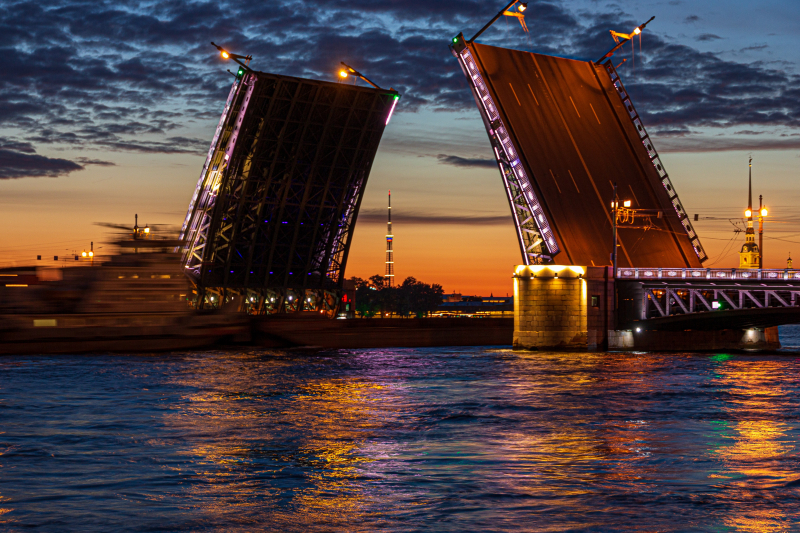 Due to its location above 59° longitude, St. Petersburg is the only city with a population above 1 million to experience the unusual natural phenomenon of white nights – a several-week stretch during which the sun only goes down for a few hours every night.

What makes them different from the midnight sun, a period of round-the-clock daylight that occurs in regions close to the Earth’s poles, is that white nights have more of a twilight quality – a fact that’s given them a very romantic reputation.

White nights begin in late May and continue up till mid-July, though the “official”, or most picturesque, part is said to be between June 11 and July 2. In those days, the Sun remains almost constantly above the horizon – the lowest it gets is 6.5 degrees below the horizon on June 21, the day of the summer solstice, when the actual “night” is the shortest of all.

Among the other places in the world where you can witness white nights are Arkhangelsk, Khanty-Mansiysk, and Anadyr in Russia, Helsinki (Finland), Stockholm (Sweden), Anchorage (Alaska, USA), and Iqaluit and Dawson City (Canada).

It is only natural that in the 300 years since the founding of St. Petersburg, white nights have become an integral part of its culture. In Alexander Pushkin’s The Bronze Horseman, the Russian classic wrote of the city:

O how I love you, Peter’s daughter! [...] / Your pensive nights of moonless light / And lambent dusk, when I, contented, / Sit in my room and read and write / Without a lamp, while in the nearly / Deserted streets huge buildings clearly / Loom up, asleep; and solar fire / Plays on the Admiralty spire; / And Dusk directly (as if plotting / To keep the golden skies alight) / Hands on the torch to Dawn, allotting / A brief half-hour to cheated Night.

White Nights, a short story by another Russian literary superstar – Fyodor Dostoevsky – has even inspired not one, not two, but nine film adaptations in the past 70 years! The most famous of them all, Luchino Visconti’s Le notti bianche from 1957 is a film classic that has since received a high-def Criterion release – so there’s no excuse not to give it a watch. The setting might no longer be Russian, but the sentiment certainly is.

On a regular year, the white nights are also a time for events and celebrations. That includes Stars of the White Nights, a series of ballet, opera, and orchestral performances at the Mariinsky Theatre; the Scarlet Sails, a graduation party for all of the city’s high-schoolers that features a massive fireworks display and an appearance by an actual scarlet-sailed ship; the White Night Swing jazz festival; and many other concerts and carnivals.

Unfortunately, this year’s events are all but cancelled or held online; the magic of the white nights will have to be enjoyed from the comfort of one’s window. And if you’re not in St. Petersburg or simply interested in reliving the experience of wandering the empty dusky streets and watching the drawbridges, you can make use of the many live cameras set up around the city. Geocam alone has almost 90 different cameras set up around St. Petersburg! For starters, check out the ones on Palace Square, Palace Bridge, Griboyedov Canal, or this breathtaking bird’s eye view of the city from the Lakhta Center skyscraper.