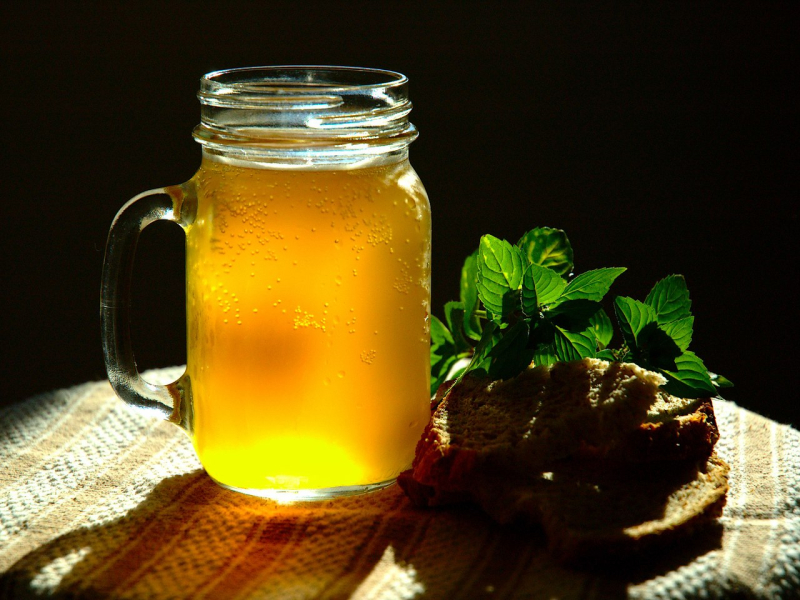 Way before Coke and Pepsi slipped under the iron curtain, Russia had started to develop its own tradition of soft drinks, some of which are still a favorite today.

Take, for example, Квас (kvas). First mentioned in relation to Vladimir, Prince of Kiev, in 989, it’s made from dark rye, yeast, and barley and is basically liquid bread. It has a distinct rye scent and, thanks to light fermentation, will tickle your tongue and provide a daily dose of carbs. Over the years, Russians have perfected the recipe with raisins, berries, and mint, just to name a few flavors, and a couple of centuries ago many homes had their own version.

I first tried it with my granddad. In the summer, we’d walk together to a “bochka,” literally a metal barrel parked on the sidewalk, and buy two full glass mugs for 6 kopecks. The cold, slightly sour drink left me with a foam mustache. Now you can pick from a dozen brands, some claiming to be using the traditional fermentation processes and natural ingredients. Whether that’s true is for people with a chemistry degree to decide. My favorites are Никола (Nikola) and Лидский (Lidsky).

Our family still consumes copious amounts of kvas, especially in the summer. Everyone gathers around for lunch and enjoys okroshka, a cold soup with potatoes, sausage and green onions where kvas serves as the magic liquid.

Similar in color but different in flavor is Байкал (Baikal). Named after Lake Baikal, probably the most famous Russian lake and also the deepest in the world, this drink was the Soviet answer to western colas. The caramel-colored beverage thankfully doesn’t taste like the lake; it’s more like sweetened herbal tea with a hint of pine, since the main ingredient is Eleutherococcus senticosus, known as Siberian ginseng. It also has eucalyptus and cardamom oils, adding to its unique taste. If you like American root beer, this is the drink to try. Just don’t top it with ice cream.

Herbs have been the base for drinks in many cultures, and Тархун (Tarkhun), which literally means “tarragon”, is a fine example. It dates back to 1887, when Mitrofan Lagidze mixed carbonated water with his own tarragon syrup at his pharmacy in Tbilisi, Georgia, to create a popular tonic. The beverage is strikingly green and tastes like the actual fresh herb. Some absinthes also contain tarragon, so this is your chance to test the flavor without going haywire.

When I was a kid, my favorite soda was called "Malvina," named after a girl with blue hair in the Russian version of Pinocchio. The drink was as blue as anti-freeze, which I thought was gorgeous. It's probably a good thing that it didn't withstand the test of time.