Brownies, muffins, maybe even crumbles, and for sure, cheesecakes, are starting to make their way onto dessert menus in St. Petersburg. But at home, locals are likely to serve you their favorites: tortes, pirogs and bulochkas. 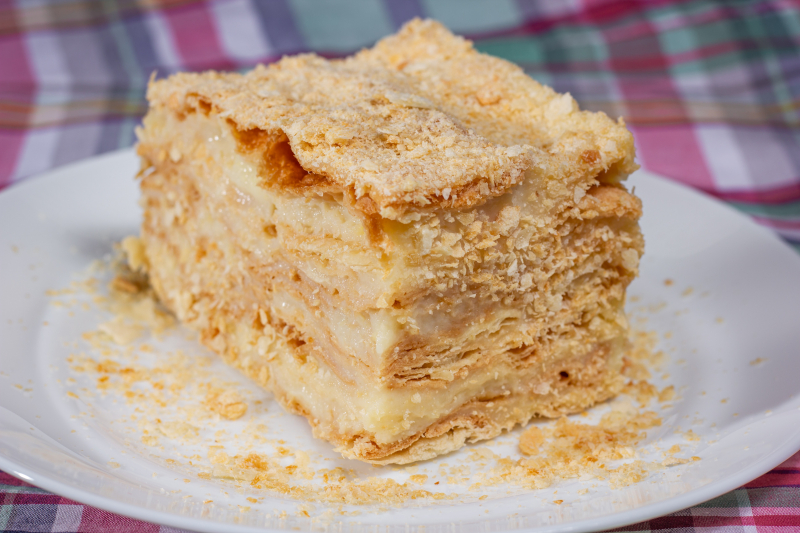 I first ran into the controversy of Russian cakes when I was trying to explain them to my American friends.

“So do you have pies?” they’d ask, meaning a flaky crust and custard-like filling.

“Then do you have cakes? Like a birthday cake?” they’d ask, meaning sheets of dough glued together with cream.

“Our torte has to do with law, not with carbs,” they’d say.

Russian torte - торт - has nothing to do with law and everything with celebrations. It’s rich, and decadent, and beautiful, and with a cherry, or several on top. It’s what you deck out with candles and order for weddings. Arguably the most regal example also happens to be my favorite - the Napoleon. It’s comprised of multiple crispy layers interlaced with rich butter cream. If it’s custard instead, it’s a fake. The only places I can still find them done the right way are Sevjer Confectionery and at my grandma’s house. The recipe dates back to 1912, when triangular-shaped pastries resembling the bicorne, a military uniform hat, were served during the centenary celebrations of Russia’s victory over Napoleon. The top was covered with crumbs supposedly to symbolize the snow. Victory or not, it’s still a winning torte.

Pirog - пирог - is usually made with yeast dough and can be both sweet or savory. Essentially, it’s a meal in a slice. From ground meat to pickled fish to cabbage, eggs and onions can be tucked between the two golden sheets of dough. Same goes for berries, fruits and cottage cheese. Its smaller cousin pirozhok - пирожок - is a grab-sized version of the same thing, perfect for a snack on the go or a side dish for soup.

Bulochka - булочка - is also a small pastry but it’s usually round and sweet. If pirozhok looks like a little dough torpedo, bulochka can be a flirtatious swirl dotted with raisins and smelling of cinnamon. Or a cute little roll with poppy seeds topped with glaze. Some bulochkas are more like rolls and supposed to be good for you - with seeds and oats and such - but that’s just boring. My favorite is a cream puff - булочка со сливками - filled with actual whipped cream and sprinkled with powdered sugar. It’s a miracle I still fit through most doors.

Whatever your favorite Russian carb fix, there’s still a long way till summer.