This year’s Congress of Young Scientists marked the fifth time ITMO University played host to the major scientific event that guides aspiring researchers and scientists into the world of science. Over this time, the conference brought together thousands of university and school students, with this year reaching an audience of over 2,000 participants. ITMO.NEWS talked to the participants of 22’ to learn more about why they decided to join the event and how they came up with their research ideas. 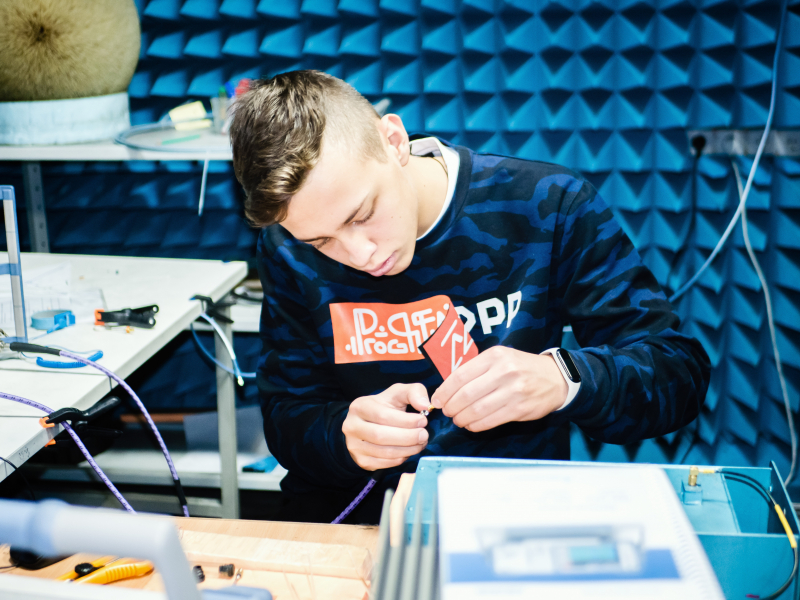 Finished 10th grade at the Presidential Physics and Mathematics Lyceum No. 239, St. Petersburg

I presented a project on automated proof of geometric problems based on symbolic computations within the Mathematical Modeling category. This was initially a school project Nikita Blokhtin and I came up with when solving geometry problems from various contests. So, there were just the two of us, no supervisors.

When working on this, we struggled most with building the architecture of the project that would allow us to formulate tasks using computer algebra. We realized that the symbolic calculations of obtained object equations can be automated by means of computer algebra. This can be achieved by allocating certain functions for each construction tool that will modify the symbolic characteristics of the objects and result in specific coordinates of a new one. All you need to do is to indicate a set of constructions with available tools and provide a geometrical hypothesis that needs to be proved (e.g., the collinearity of three points). As a result, the system offers you a mathematical explanation.

I believe that such events as the Congress of Young Scientists are of great value for students because this is a chance for them to present their work at a major scientific conference. It is especially important since I’m planning to get my degree in a similar field.

Finished 11th at the Gymnasium No. 177, St. Petersburg

I took part in the Computer Graphics, Multimedia and Interfaces category where I spoke about color blindness. The topic of my project came about by chance. At one of the events, I happened to read an article about a person with this condition who shared how they learned to identify colors on screens. As their method seemed a bit inconvenient, I aspired to develop a program that would name the color on which the user’s cursor is placed.

When I just started, I thought this was an excellent chance to brush up my programming skills. But with time, I realized the true value of my project and decided to turn my idea into an excellent product. The research took only two weeks. Though I expected that collecting information, reading specialized books and articles would take me much longer, I spent most of my time designing and finalizing the software.

After I finished the project, I sent it to Artemy Rubinsky, an associate professor at the St. Petersburg’s First Pavlov State Medical University, who wrote a review on my work that I then submitted to the Center for Social Rehabilitation of Persons With Disabilities and Disabled Children of the Nevsky District together with the project itself.

My project came true thanks to Victoria Preobrazhenskaya, a teacher of additional education from the Central House of Technology, who not only helped me bring my idea to life but also encouraged me to code and create something new.

Research topics are everywhere. The conference inspired me with new fresh ideas for future projects and I’m certain that such events are essential to know what’s current in modern-day science.

I’m now working on a project related to rehabilitation training of movement disorders, which is, sadly, a bit beyond my competencies at the moment. To gain the needed skills, I’m going to apply to ITMO University.

Finished 8th grade at the Gymnasium No. 642, St. Petersburg

I did research in the retopology of 3D models. My current interest is 3D modeling, though I’ve also been practicing meshing software (a mesh is a collection of vertices, edges, and faces that defines a 3D object – Ed.) for over a year now and am interested in game engines, too. When designing the models, I had trouble building a mesh network, which is an essential and rather time-consuming aspect of 3D modeling. That was not the only problem, though. As it turned out, there is more than one method of autoretopology.

In my project, I compared all the existing methods using both modeling software and game engines. Speaking of gamedev, I was also inspired by the prerelease of Unreal Engine 5, which featured a novel system of retopology named Nanite. However, later on, when I already had my presentation and the new software made it to the market, it became clear that Nanite has many more issues that I described in my article. Nevertheless, it didn’t affect the results of my study anyway.

My first task was to handle large amounts of information, particularly the specifics of documentation and updates of the new versions. Then, I had to identify essential criteria that should be taken into account, compare the current methods, and, finally, develop a presentation. I strived to find the right practical method without doing it by hand – and what I came to learn is that there is no such.

I couldn’t do this project without my supervisor and also my dad Rodion Yuriev who is currently pursuing his PhD at ITMO University. I worked on the project for around three months, dedicating at least three hours a day to it.

I faced quite a few challenges along the way. I spent hours digging through documents before I could finally test my hypothesis but it was not as hard as when I had to find a way to put everything I learned into an article.

I don’t see myself doing anything, except gamedev. I’m eager to invent something that will be both practical and multifunctional.

My category was called Interdisciplinary Sciences. My biology teacher Yulia Kiseleva and I came up with a device capable of making our school a COVID-free zone. Here is how it works: the technology stimulates the production of negative oxygen ions that collect dust, bacteria, and pathogens in a specifically designed dust collector, thus purifying the air in a room. The study conducted in 2020-2022 showed that air ionization helped bring the number of disease cases to zero.

The hardest part was to collect and analyze the data from students. But it is well worth the effort because our technology won a patent in Kazakhstan and we already found sponsors who are helping us to bring it to the market.

I had a terrific time at the congress. I learned more about other student projects and saw where I was at.