Scientists from the Netherlands and Russia designed and tested a new metasurface-based technology for enhancing the local sensitivity of MRI scanners on human test subjects for the first time. The metasurface consists of thin resonant strips arranged periodically. Placed under a patient's head, it provides much higher image quality from the local brain region. The results, published in Scientific Reports, show that the use of metasurfaces can potentially reduce image acquisition time, make the procedure more comfortable for patients and acquire higher resolution images to allow diseases to be diagnosed at an earlier stage. 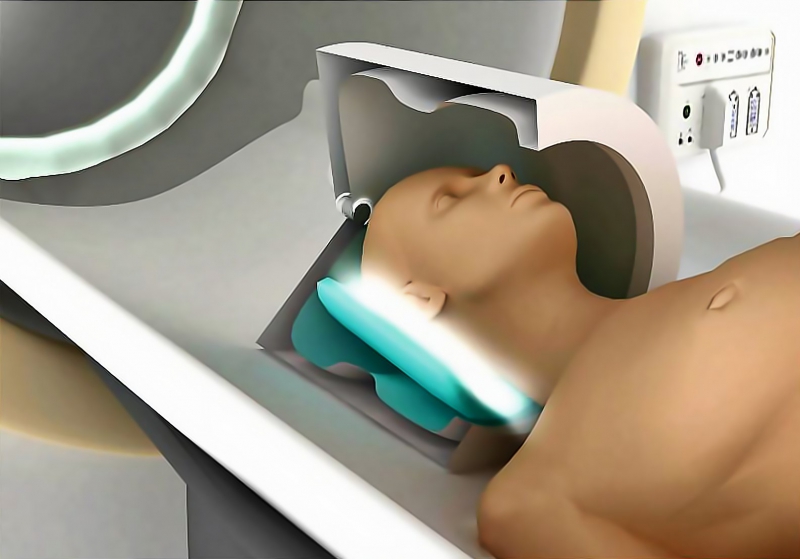 Magnetic resonance imaging (MRI) is a widely used medical technology for examination of internal organs, which can provide, for example, information on structural and functional damage in neurological, cardiovascular, in musculoskeletal conditions, as well as playing a major role in oncology. However, due to its intrinsically lower signal-to-noise ratio, an MRI scan takes much longer to acquire than a computed tomography or ultrasound scan. This means that a patient must lie motionless within a confined apparatus for up to an hour, resulting in significant patient discomfort, and relatively long lines in hospitals.

Specialists from Leiden University Medical Center in the Netherlands and ITMO University in Russia for the first time have acquired human MR-images with enhanced local sensitivity provided by a thin metasurface - a periodic structure of conducting copper strips. The researchers attached these elements to a thin flexible substrate and integrate them into the close-fitting receiving coil arrays inside the MRI scanner.

"We placed such a metasurface under the patient's head, which increased local sensitivity by 50%. This allowed us to obtain detailed scans of the occipital cortex in half the usual time. Such devices could potentially reduce the duration of MRI studies and improve its comfort for subjects", says Rita Schmidt, the leading author of the paper and researcher at the Department of Radiology of Leiden University Medical Center.

The metasurface, placed between a patient and the receive coils, enhances the signal-to-noise ratio in the region of interest. Comparison of MRI scans with and without the use of metasurface

"This ratio limits the MRI sensitivity and duration of the procedure", notes Alexey Slobozhanyuk, research fellow at ITMO University's International Laboratory of Applied Radioengineering. "Often the scans must be repeated many times and the signals added together to separate actual data from random noise. The use of metasurfaces eliminates this requirement. If now an examination takes twenty minutes, it may only take ten in the future. If today’s hospitals serve ten patients a day, they will be able to serve twenty using our development."

According to the scientists, the metasurface can also increase the definition of the resulting scans.

"The size of voxels, or 3D-pixels, is also limited by the signal-to-noise ratio. Instead of accelerating the procedure, we can adopt an alternative approach and acquire more detailed images in the same amount of time as before. Such images can let us detect tumors at earlier stages", says Andrew Webb, leader of the project and professor of Radiology at Leiden University Medical Center.

Until now, no one has succeeded at integration of metamaterials into close-fitting receiver arrays because the metasurfaces’ dimensions were too wide. The novel 8mm-wide design of the metasurface helped solve this issue.

"Our technology can be applied for production of metamaterial-based ultra-thin devices for many different types of MRI scans, but in each case, one should firstly carry out a series of computer simulations as we have done in this project. One needs to make sure that the MRI device’s properties do not affect metasurface’s performance", concludes Rita Schmidt. The scientists are planning to continue their research in both Leiden and St. Petersburg; they hope to transform ITMO University’s Laboratory of Applied Radioengineering into a center for cutting-edge projects in this field, to acquire modern equipment and to draw in more young specialists to create device prototypes and introduce them into clinical practice. For that reason the staff at Applied Radioengineering Laboratory and Andrew Webb have already filed a grant request at Russian Science Foundation.