Science Fest, a grandiose celebration of science, has yet again been hosted in St. Petersburg. Held on September 22-23, the event spread over ten unique spaces in the city: the usual Planetarium and Lumiere Hall were joined by the museums of optics, cosmonautics, and railway transport, the Lenpoligraphmash creative space, the St. Petersburg Polytechnic University, and the landmark Annenkirche church. The extensive program reflected the festival’s key message: science is a valued contributor to all aspects of our life. 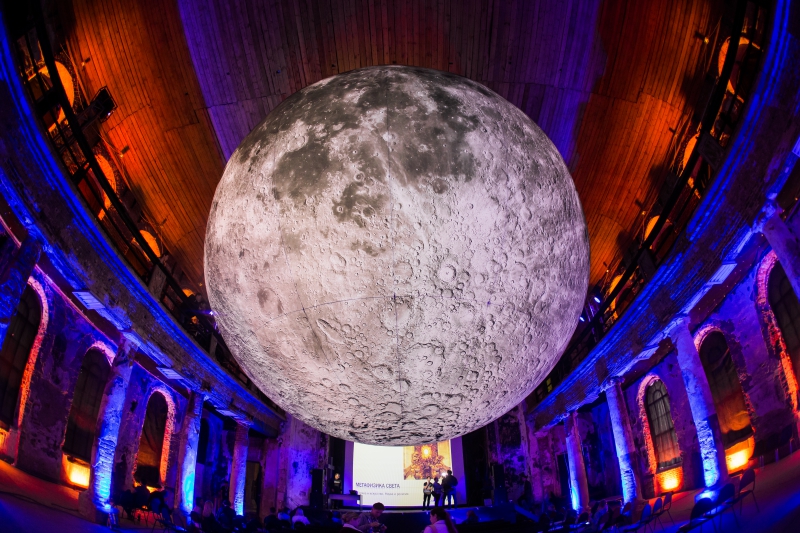 The atmospheric Annenkirche was chosen as a location for a range of spectacular Science and Art events. This historic Lutheran place of worship is no stranger to lectures and concerts held within the beautifully ramshackle church walls, but the festival transformed it beyond recognition. Star attractions included a giant true-to-form replica of the Moon which graced the dimly-lit main hall, adding to the general mystique of the place.

All the showpieces were carefully selected by the organizers to represent the diversity of science’s contribution to the exploration of senses. Displayed curios included a detector of human emotions, which analyzed visitors’ heart rate, body temperature and posture to identify their emotional state, taken in a percentage ratio of anger, joy, disappointment, and other feelings they were experiencing.

ITMO University professor and curator of the university's Museum of Optics Sergey Stafeev presented an optics exhibition and gave a talk on the synthesis of knowledge and faith.

“Both science and art stand to gain from their interaction, and that is why we should work on hosting more events similar to Science Fest. There is nothing strange about a church serving as a location of a science festival. Annenkirche’s pastors were very happy to collaborate with us, and it wasn’t about their Lutheran faith or open-mindedness that explained their choice; what mattered was how thought-out and well-organized the event was. I’m positive that if we come up with a good-quality exhibition and put in our best work, people of all beliefs will be very glad to engage with science in this way,” says Sergey Stafeev.

While the Annenkirche program explored the links between art and science, Lenpoligraphmash became a heaven for all digital entertainment enthusiasts. The spacious hall was lined with retro game machines, letting participants to take on the role of the ever-popular plumber Mario or spar with a friend in a game of Street Fighter.

The extensive program also included a range of lectures on atypical uses of virtual and augmented reality technologies. VR headsets have taken on a reputation of unnecessary and extremely expensive gaming gadgets, but the festival’s speakers wanted to prove otherwise. One expert, Viktor Komarovskikh, used his Lenpoligraphmash talk to showcase Tvori, a program he developed to give VR users a toolset for creating complex animations. Having put on the glasses and enabled the program, users find themselves in a clean-slate virtual world which they should fill in by choosing the setting, characters, camera angles, and special effects. Much as in conventional animation-making, all work here is done by hands, but in an unusual way: users use hand gestures to bring their story to life.

Best user-created content is featured on Tvori’s Youtube channel. What Viktor likes the most is a short film about parachuting cats, created by a promising student director from Moscow. She made the animation only a month after she started working with Tvori.

The animation expert’s innovative work was recognized by organizers of a prestigious New York animation festival ‘Anny’, who invited Viktor over as a guest speaker. But some people in the industry weren’t that ready to welcome technological progress with open arms.

“I promote my program and other technologies I create in an attempt to ease people’s lives and work. But it doesn’t always go as planned. Some time ago I was hired by the Melnitsa animation studio. A huge chunk of animators’ time is wasted on drawing backdrops of cartoons, and this seems all the more useless given that few spectators actually care about such details. I offered the company to use my technology to save them time and effort. But my initiative wasn’t met with support. They got so entrenched in old methods that they refuse the gifts the scientific progress brings. So soon after that I decided to quit my job and focused on my app instead,” shares Viktor.

Planetarium, Lumiere Hall and Yotalab became the most-visited venues. All of these are located a stone’s throw from each other on the Obvodny Canal Embankment, so visitors freely moved to and fro, which partially explains the popularity of these locations. But their creative programs full of wow-inducing spectacles take the most credit.

The staff of Yotalab center challenged guests to an unusual game of air hockey which pitted humans against robots. The playground was jam-packed with rooters watching the match with bated breath and bursting into applause when the human side stroke a victory.

Entertainment came hand in hand with education at the Lumiere Hall. In between the presentations held by ITMO University, St. Petersburg State University of Aerospace Instrumentation, and St. Petersburg State Transport University, participants snuck into the creative space’s snazzy hall where they could jump on a trampoline, explore a self-driving car, and take pictures with cosplayers dressed as Star Wars characters. All guests were also invited to attend ITMO University’s own scientific stand-up show ‘Quantum Potential’.

The Planetarium program championed harmonious relations between humans and technologies. Visitors flocked to this unique space equipped with the biggest projection dome in the world to watch special screenings of films about space. There was a show for every audience: from Sci-Fi cartoons to Hollywood hits and an immersive performance organized by the Hamburg Planetarium. Most of the seats were taken by guests with kids, and, according to the festival participant Lidia Georgieva, this is the way it always should be.

“I’ve been to open lectures before, I’ve even organized some, but never participated in an event of such scale. What I really liked was how many kids there were. I think that they were the audience the organizers prioritized the most. I hope that the fun and fascinating experiences they’ve had here will motivate them to choose a scientific career path or just keep learning about contemporary science. It’s vital that we make the younger generation see that they shouldn’t ignore technological progress, but actively use it in all areas of their life,” notes Lidia.