With its incredible mix of medieval, gothic, Renaissance, Art Nouveau, Soviet and contemporary architecture, Riga can be rightfully called the city of contrasts. 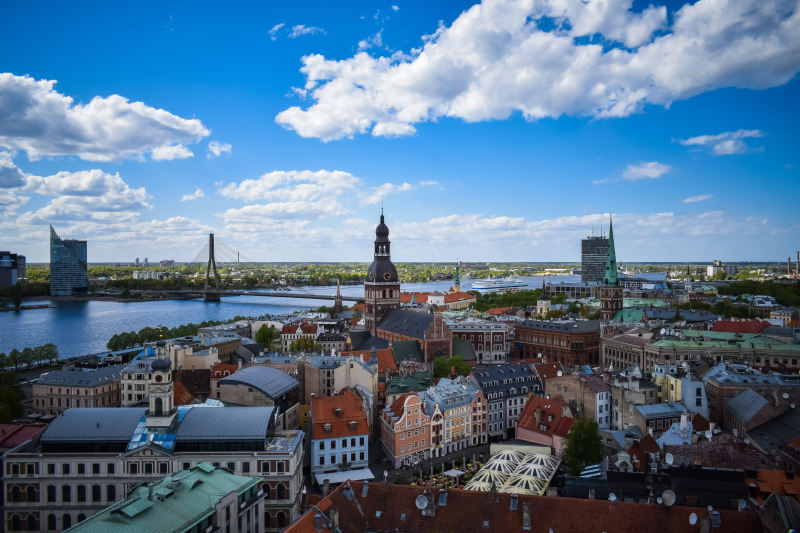 In just a few weeks, on November 18, 2018, Latvia will celebrate the 100th anniversary of its independence from the Russian Empire, a highly significant milestone for a country the history of which has been written by Sweden, Poland, the Russian Empire, Nazi Germany, and the Soviet Union. In Riga, the Latvian capital city, the past is alive, and (unsurprisingly) complicated.

The first thing you see when approaching the capital of Latvia by train is a tall Stalinist skyscraper with the familiar Communist hammer and sickle on its façade, which strikes you with its resemblance of the Seven Sisters buildings in Moscow. Massive, bleak and a bit shabby, this building now serves as a remnant of the bygone era when the three Baltic states were part of the Soviet Union. And it’s not the only one. It took me about half an hour of walking past Soviet-style blocks and St. Petersburg-ish three-story eclectic buildings to realize that Riga is actually all about its quaint medieval Old Town with its curvy cobbled streets and high-spired towers soaring into the sky, elaborate Art Nouveau edifices and seaside resorts.

They often say that Riga’s Old Town (aka Vecriga) is one of the most well-preserved old towns in Europe, which may well be true, although it is pretty small compared to Tallinn’s Old Town, in large part due to the destruction it sustained in WWII with some buildings being razed to the ground. However, there are still quite a lot of real architectural gems there worth checking out.

One of the most iconic landmarks of the Old Riga is the House of the Blackheads. Originally built in the 14th century for the Brotherhood of Blackheads, an association of unmarried merchants and ship owners, it was reduced to a ruin by the Nazis and then demolished by the Soviets in the 1940s. Above the entrance it reads “If I should fall, build me again”, and they did: the structure was rebuilt in the 1990s and is now referred to as the most beautiful edifice in Riga (I couldn’t take my eyes off its opulent baroque façade for, like, twenty minutes, which is quite a lot for us, St. Petersburgers, who are used to all kinds of architectural wonders).

Among Riga’s oldest dwelling houses are the so-called Three Brothers. Though very little is known about them, each of the ‘Brothers’ illustrates a different period of the city’s history and architectural development. The first one dates back to the 15th century and has crow-stepped gables with Gothic and Renaissance elements; the neighboring house shows Dutch Mannerist influence, while the last one exemplifies 17th-century Baroque architecture. Most visitors don’t know, however, that one of the buildings hosts the Latvian Museum of Architecture, which offers free exhibitions.

History buffs will love walking through the Swedish Gate, the only gate of the Old Riga that still stands today. Around the time when the gate was erected, Riga was occupied by the Swedes. There are many legends about the gate (all ending with someone dying), and the locals believe it to be haunted, giving some extra vibe to this already-atmospheric spot.

Though impressive and mesmerizing, the Old Town is not the only attraction in Riga. With more than 600 Art Nouveau buildings (which makes up nearly a third of all buildings in central Riga), Riga is often referred to as the capital of Art Nouveau, and rightly so. Built during a period of rapid economic growth, most of Riga’s Art Nouveau edifices were designed by Latvian architects and are predominantly located on Alberta iela and Elizabetes iela, which are awash with elaborate pastel-colored façades featuring flamboyant naked maidens, floral motifs and funky gargoyles. You may also consider visiting the Riga Art Nouveau Museum to learn more about this extraordinary style.

Even if you only go to Riga for a weekend (like I did), make sure to save some time for a visit to Jurmala, a seaside resort situated some 25 kilometers away from Riga. Famous for its mild climate, transparent shallow waters and sandy beaches, Jurmala has long been extremely popular among Latvians and foreign tourists alike. I went there in late September, and even though it was already too cold for swimming, I really enjoyed walking by the seashore, admiring white-crested rolling waves, feeding gulls and collecting seashells. You can get to Jurmala by train, bus, or ferry, but train is probably the cheapest and fastest option, with trains departing every 30 minutes from the central railway station and round-trip tickets costing 3.50 euros (as of 2018).

Finding places to eat in an unknown city is always a challenge for me, so here are some of my personal favorite eating places in Riga:

Souvenirs are always fun to bring home but the hunt for them can be really tricky, and Riga is no exception. The Old Town is packed with souvenir shops, but all you can find there are rows and rows of uniform inelegant toy houses. However, after exploring every little booth in the Old Riga, I was able to find a few unique souvenir spots: