August 26 marked the start of the 20th International Sol-Gel Conference. Taking place at ITMO University, it is dedicated to research in the field of solution chemistry. This is the first time that the prestigious event is being held in Russia. More than 500 participants from China, France, Germany and other countries gathered in St. Petersburg to discuss the future of the field, share about their experience, explore promising developments, and talk about their own research topics in the format of stand-up presentations as part of the Science Slam project. The main topic of the anniversary conference was supporting young researchers. 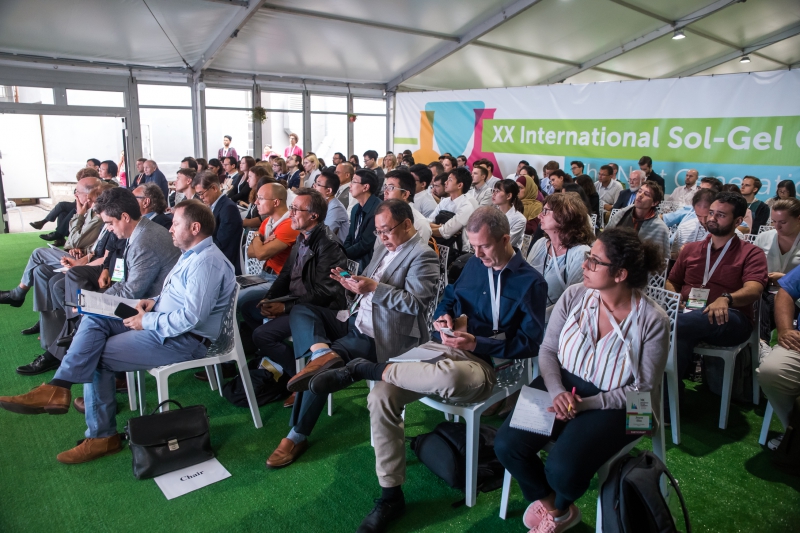 International Sol-Gel Conference is a prestigious scientific event that takes places once in two years and brings together researchers in the field of solution chemistry. The sol–gel process is in itself a method for producing solid materials from small molecules, used for the creation of innovative medications, smart covers for phones and other day-to-day products. The capabilities and prospects of sol-gel can be seen as limitless, from the production of flexible ceramics to the formation of an aerogel coating that could make the vast Martian territories suitable for living in. In the course of the conference, scientists working in different fields have the opportunity to exchange their experiences and expertise at plenary sessions, host workshops and network with each other.

Apart from that, the program of the Sol-Gel Conference also includes the awarding of the international Ulrich Award aimed at supporting young scientists working in the field of sol-gel technologies. At the previous conference, which took place in 2017, for the first time in the event’s history the prestigious award went to Russian researchers: Head of ITMO University’s SCAMT Laboratory Vladimir Vinogradov and Director of ITMO’s ChemBio Cluster Alexander Vinogradov. It was then that they came up with the proposition to host the 2019 conference at ITMO University. The panel of judges of the International Sol-Gel Society (ISGS) favored their application over those by Swiss and Greek universities and approved holding the 2019 International Sol-Gel Conference in St. Petersburg.

As a result, ISGS and ITMO University joined forces to organize the 2019 conference, with the local organizing committee consisting of Vladimir Vinogradov; David Avnir, Professor at the Hebrew University of Jerusalem; Vadim Kessler, Professor at the Swedish University of Agricultural Sciences; and Daria Kozlova, ITMO University’s First Vice-Rector. Stepping in as partners of the event were Russian Foundation for Basic Research and the aviation company Aeroflot. Logistics were conducted by the staff of various ITMO University departments, while volunteers from SCAMT Laboratory and the recently held Mendeleev-150 conference provided their help at the event. According to preliminary data, the 2019 International Sol-Gel Conference attracted over 500 participants from all over the world.

The grand opening of the Sol-Gel Conference took place on August 26 at the Tovstonogov Bolshoi Drama Theater. The chair of the conference’s organizing committee Vladimir Vinogradov thanked the guests for their participation and announced the main slogan of the event, New Generation.

“The first Sol-Gel Conference was held in 1981 in the format of a small workshop. I wasn’t even born then, but over the course of the following 38 years, the conference has majorly risen in significance both for the scientific community and the industry. It is hard to find a more relevant field that studies and uses inorganic oxides. We do this elegantly, bringing up a new generation of researchers as we move forwards. That is why we chose New Generation as the main topic of our conference. We asked leaders and recognized experts in the field what they think about the future of the sol-gel community and what career development pathways for young researchers they see. It is probable that we won’t find all the answers, but we have to keep the dialog going and keep talking to each other.”

As continued by Prof. Vinogradov, the development of the sol-gel community hinges upon the work in three key aspects: science, innovations, and education. Science can exist independently of the other two, but it’s important that those operate in conjunction for the community to be able to solve globally significant issues. Without education, it’s impossible to bring up new generations of scientists and enable an expeditious and effective transfer of real-world scientific developments and problems researchers are working on. Same with innovations: if science is not being implemented in the form of practical applications, this leads to the breakdown of the chain. Building this cycle is one of the key conditions for the community’s successful development.

It is for this reason that choosing the conference’s focuses, the organizers gave pride of place to young researchers, their career prospects, participation in grant competitions, and opportunities for promoting their own projects and reinforcing connections within the scientific community. It was easier for young chemists to partake: a special contest was organized with fee-free access to the event as the main prize.

Because of 2019 Sol-Gel’s focus on supporting young specialists in the field, the program underwent significant changes compared to previous years. Joining plenary reports by globally renowned scientists, which revolved around applications of the sol-gel method in 3D printing, quantum technologies, space engineering and other promising fields, and the Ulrich Award ceremony were lectures by students and panel discussions aimed at helping young researchers. Titled “How to build a successful career”, one of the latter will give participants the chance to get advice on achieving success in science from experienced scientists and representatives of the industry.

“International conferences offer a valuable opportunity for communicating with colleagues, “ says participant Pascal Cop, a PhD student and research group member at Justus Liebig University Giessen, Germany. “You meet and interact with specialists from all over the world and get new ideas for improving your own work, as well as future research. Networking is one of the main aspects of a modern scientist’s work. What’s more, it’s always nice to see just how many people work in the same field that you do.”

Also included in the conference’s program is a workshop on science communication. According to Polina Khapaeva, Director for Development at the SCAMT ChemBio Cluster, the main goal of events like this one is to teach scientists to talk about their research so that as many people as possible would learn about the importance of the field of sol-gel technologies.

The conference’s participants will be able to practice science communication as part of Science Slam, a new format where scientists present the specifics of their research during ten-minute presentations that resemble stand-up comedy gigs. Several slams have already been held in St. Petersburg, including, inter alia, participants from ITMO University, but this will be the first time the novel format forms part of the official program of International Sol-Gel Conference. One of the slam’s participants is Léa Dejob, PhD student at Claude Bernard University Lyon 1.

“To be honest, this is not only my first time visiting St. Petersburg, but also my first experience of participating in an international scientific conference. My colleague and I plan to attend all the presentations, workshops and lectures in the conference’s program, dividing these between us to learn about the latest research in the field and explore different cases of the technology’s practical applications in the industry. In France, we are engaged in close collaboration with industrial partners: our university has a joint laboratory with the company Groupe SEB, which owns such brands as Tefal and Moulinex. I am also really looking forward to my presentation at the Science Slam and receiving valuable feedback from the conference’s participants,” shares the researcher.

The program of the conference, which is to take place on August 25-30, also includes reports by established members of the scientific community with 70-and-over h-index. For one, Peter Fratzl, Director at the Department of Biomaterials, Max Planck Institute of Colloids and Interfaces (Potsdam, Germany) and member of the German Academy of Science and Engineering (acatech) and Materials Research Society (MRS), will talk about water-mediated forces in biological materials. Eugenia Kumacheva, Professor of Chemistry at the University of Toronto, Canada, a 2008 laureate of the L'Oréal-UNESCO Award for Women in Science and a Canada Research Chair in Advanced Functional Materials, will give a presentation on bridging the gap between molecules and nanoparticles. In his turn, Aziz Muzafarov, Professor, Academician and Director of the A. N. Nesmeyanov Institute of Organoelement Compounds of the Russian Academy of Sciences, will share about the research on hyperbranched polyethoxysiloxanes and related molecular nano-gels.