Seven teams became winners of the International Contest of Engineering Teams “Kvantoriada 2019” (ICCET 2019) that took place in Moscow at the end of last year. Among them was the team Quantum from Astrakhan who got help from the scientists of ITMO’s Faculty of Physics and Engineering in the development of their prototype. Read more about the contest, its participants and the joint effort of scientists and students in this article by ITMO.NEWS. 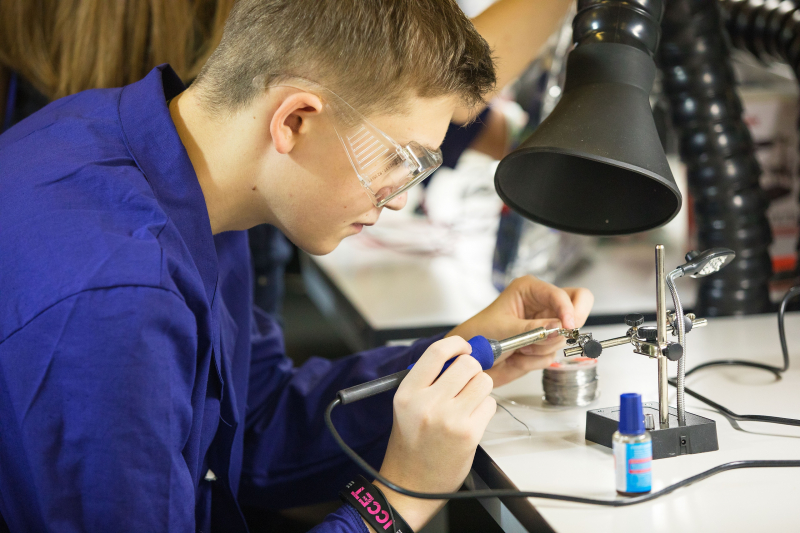 ICCET is an international contest for children’s engineering teams. The event aims to attract students’ attention to engineering trades and give them an opportunity to try their hand at project design and presentation, as well as establish communication between school students and mentors from the academic community.

The participants compete in ten categories in fields such as electronics, energy engineering, genetic engineering, navigation and even space exploration.

The teams had to choose a track at the application stage. After that, they could start preparing for the contest: communicate with experts, get training and develop a prototype that they would present at the finals. The authors of the best ideas selected by the jury got financing for the development of real projects.

The participants of the team from Astrakhan got acquainted at the Astrakhan technopark Quantorium.

“We had a tour of Quantorium, where they brought students from the city’s various schools. They showed us equipment, told about the various fields one can work in. Me and my friends, we liked “Nano Quantum” the most – a field that has to do with nanotechnologies and new materials. We signed up, completed an introductory course and went for an advanced one, where we all got to know each other. It turned out that we were all from the same school. This is how we began our work,” says Alina Beglova, an 11th-grade student and a member of the Quantum team.

11 students from Astrakhan split into two teams in order to work on their projects. Two scientists from ITMO’s Faculty of Physics and Engineering, Anatoly Pushkarev and Sergei Anoshkin, were invited to be their curators. Under their guidance, the students developed their ideas in the field of flexible solar cells and light-emitting diodes.

They presented the first samples after the development stage. The jury highly praised the team’s project, which got into the finals of ICCET. After that, Anatoly Pushkarev and Sergei Anoshkin invited the children to do an internship at ITMO University. Here, the team members familiarized themselves with the operation of the laboratories of the Faculty of Physics and Engineering, visited the Museum of Optics and got additional training for the contest.

“Studying the theory for our track was very hard, but that let me learn many new things in the field of solar power. I really liked the internship at ITMO, this was a useful experience and an important stage of preparing for the contest,” comments Yaroslav Zelenchukov, Quantum team captain.

According to the participants, the supervision by ITMO scientists was a real good help and let them thoroughly prepare for the contest.

“At ITMO University, we’ve reviewed the knowledge we got during the stage in Astrakhan, got to work in a well-equipped laboratory and trained to answer complex questions related to the topic of our project. Attending an event as big as ICCET was a very interesting thing to do. It gave us experience in not just solving design tasks but in working as a team, as well. We faced many challenges at the contest: from a lack of chemical agents to interteam conflict, but what’s important is that we managed to deal with those. Every day of ICCET taught us something new. I think it’s a unique opportunity to communicate with lecturers from universities and try tackling nonstandard tasks,” shares Alina Beglova.