Sofiia Zarubenko is a PhD student at two universities: World Maritime University, Sweden (responsible for academic curriculum) and Lloyd’s Maritime Academy, UK (responsible for administering the learning process). The study process is based on distance learning, except for the exams that should be taken in London. However, this year, the Academy’s students from all over the world had to find a way to take the exam despite the quarantine. ITMO University helped Sofiia to solve this problem by organizing an exam for the foreign university. 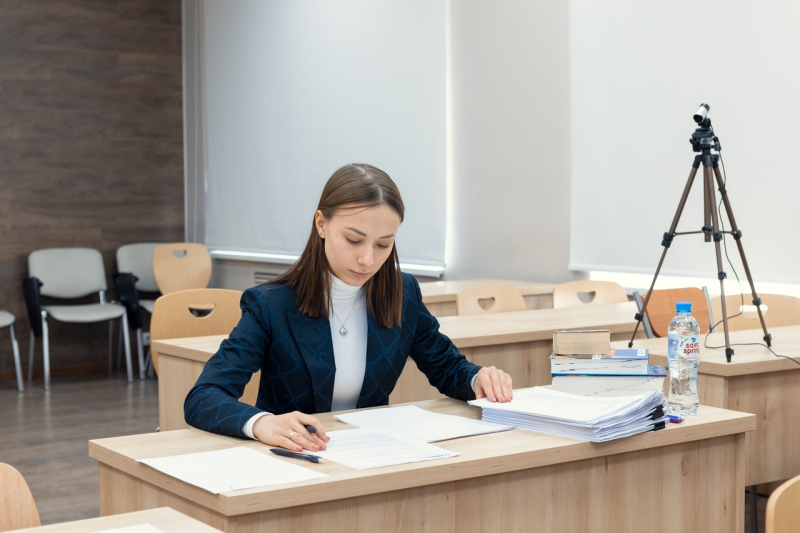 Sofiia Zarubenko during the exam

Sofiia Zarubenko works as a lawyer at a shipping company, and at the same time studies at two universities: at the World Maritime University in association with Lloyd’s Maritime Academy, UK, and at MGIMO, Russia.

Traditionally, spring and summer are seasons for student examinations. However, this year’s coronavirus pandemic and quarantine interfered with it.

“I was supposed to go to London in March in order to attend three seminars at the Academy and pass the final exam, after which I would be able to start working on my thesis. Due to the virus, however, the borders were closed, and professors’ and students’ official trips got canceled, so I urgently needed to find another way to pass the exam,” says Sofiia Zarubenko.

The university that Sofiia studies at has offered international students an opportunity to pass the exam in their hometowns, but on one condition: they have to find an educational institution that will be ready to organize the examination in accordance with the World Maritime University and Lloyd’s Maritime Academy’s requirements.

“First things first I asked HSE in St. Petersburg, because that’s where I got my Bachelor’s degree from. They offered me to conduct an online exam. However, the World Maritime University didn’t agree to that. Then I wrote two more letters: to ITMO University and to Admiral Makarov State University of Maritime and Inland Shipping. ITMO University responded first, and I am very grateful for their help,” says Sofiia.

If no university would agree to help the student, she would have to pass the exam in the middle of May. According to Sofiia, that would be much harder, because she took an unpaid vacation in order to study for the tasks, and she doesn’t have an opportunity to do so again, even though, of course, in two months she would need a revision of the material.

The exam and distance learning

The exam was organized by specialists from the Center for Student Science, Conferences and Exhibitions.

“Alexander Atrashchenko, the advisor to ITMO University’s Vice Rector for Research, contacted us and told us about Sofiia’s situation. Of course, we were ready to help. Despite the quarantine, we continue to work, and according to the rules we’re allowed up to 50 people in the class, and in this case there was only one student. Our center contacted Sofiia’s current university, and they have given us the regulations and the tasks. We’ve prepared the class, put up the cameras, and invited a proctor. It’s the first time we are conducting such an exam for a foreign university, but we were happy to help out Sofiia in this tough situation,” says Ekaterina Khorosheva, the head of ITMO University’s Office for Conferences and Exhibitions.

The exam includes two writing tasks: two hours for answering questions prepared at home, and three hours for an essay on not previously given topics. ITMO University’s staff supervised the exam and the timing.

As Sofiia studies remotely at two universities at once, she has a lot of experience in distant learning. While all students in Russia also have to study from home, we decided to ask her what are the pros and cons of distant learning.

“Distance learning makes many programs more accessible, for example, for international students, who can’t afford living in another country, or for those who have a job. For a long time, I couldn’t find a PhD program in my field of studies in Russia that would allow me to study from home. So, distance learning is flexible, and it’s great. However, one must be prepared for it. You should be able to organize your schedule on your own, to deal with laziness, to be efficient, even when there’s no professor, and tomorrow no one will check on you. I’m afraid that not all students were ready for this in the current situation, but the ability to study responsibly should be developed, that’s for sure,” says Sofiia Zarubenko.