“As an international student, I've adapted to my new life in St. Petersburg pretty well. I'm very happy with everything here and really enjoy being around everyone,” says Hrishikesh, an international Master’s student at ITMO. In today’s interview, we talked about ITMO’s programs and how Hrishikesh became interested in them. He also shares his view on how Russia compares to India and other countries when it comes to studying AI, robotics, and computer science. 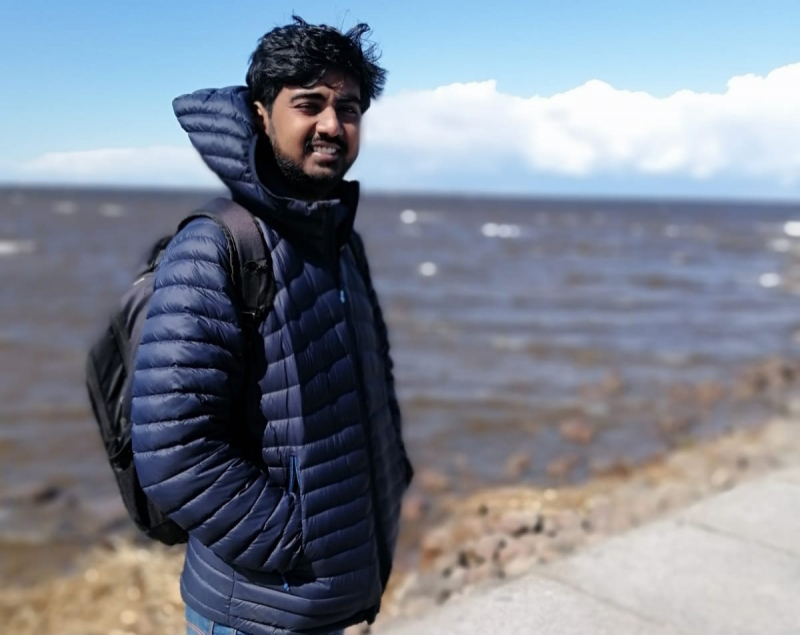 Please introduce yourself to the readers.

My name is Hrishikesh and I am an Indian from the state of Maharashtra. I got my Bachelor’s in engineering from NMIMS University in Mumbai. After graduating, I worked as a mechanical engineer for a few years. Then I decided to study further and enrolled in a Master’s degree here at ITMO.

I am studying robotics and artificial intelligence. It is a two-year Master’s program taught completely in English.

I felt that learning robotics and AI will be an upgrade to my skill set. These are the buzzwords of this generation. Therefore, a good grasp of these topics will surely help me get a better job. Indian companies are also shifting towards robotics and AI. I am very interested in automobiles. Companies like Tesla and Tata (an Indian automobile company) produce self-driving cars that make use of robotics and AI a lot. My dream is to work on a similar project.

How did you come across ITMO?

I learned about ITMO and the program from the Study in Russia website. I had heard about ITMO earlier too. I knew that they won the ICPC Programming Contest seven times! Upon further investigation, I learned that the programs offered at ITMO are not only high-quality but also pretty affordable.

Did you consider other countries?

I did. In India, most engineering students consider going to Germany for their Master’s. I was no different. But I also explored Russia as my backup option. Russia is considered the hub for medical studies. But it should be brought to light that Russia is also quite advanced in other subjects such as computer science, AI, and physics, too.

Why did you opt for Russia over others?

Besides Russia, I was also accepted to a few universities in Germany and Italy. But due to the pandemic, I faced some problems with my visa application. In the end, I was left with two options –  to study in Russia or try again next year. I decided to take my shot and go to Russia. And this is the best thing that I could have done. I am extremely happy to be here. Nothing could have been better than studying at ITMO. There is no looking back now.

What are you looking forward to the most?

ITMO has a nice provision for academic mobility where a student (both Russian and international) can study in a foreign partner university for a semester. I want to spend a semester at the ESI Business School in France. I am really looking forward to it.

Did the teaching at ITMO match your expectations?

Before coming to Russia, I thought that the teachers here won’t be able to communicate in English. But I was completely wrong. Every teacher at ITMO has a good command of both Russian and English. Some teachers can also speak some other languages such as Spanish and Chinese. The teachers here put a lot of effort into explaining each and every concept. I never faced any difficulty studying at ITMO.

Did you find any major differences in the teaching style?

Yes, I do. The curriculum at ITMO is very practice-based. Unlike my Bachelor’s program, ITMO pays a lot of attention to hands-on work. Students here get a lot of industry exposure which is absolutely crucial in today’s world. I have worked as an engineer and I can vouch for the skills taught at ITMO. They are top-notch.

What was your first impression of Russia?

I was traveling from Moscow to St. Petersburg by train. I had three huge bags. I was facing some difficulty in movement because of them. A Russian guy came up to me from nowhere and offered to help. He carried some of my bags and escorted me to the platform where my train was supposed to arrive. He also helped me board the train comfortably.

Unlike what some people might say, Russians are very friendly and welcoming.

How has your experience been in St. Petersburg?

I have really enjoyed myself in this beautiful city. The weather has been a challenge for sure. I have never experienced such cold temperatures. I spent my childhood in the coastal region of India which never has such cold weather. However, with proper clothing, one can endure the chill comfortably. Coffee and hot chocolate to the rescue!

What is the best part of being an international student?

There are so many international students here. One of the pros is that you get to make so many new friends from various countries. You get to learn about their traditions and their cultures. It is like a celebration of life and diversity.

Spending time with other international students broadens your perspective and teaches you cultural competence which is a key soft skill to have, especially when you work with a diverse group of people.

What are your fondest memories at ITMO so far?

I really had fun cooking international dishes with my friends. I got to learn about so many new vegetables and spices. We also went on excursions together which was a lot of fun. My former roommate is Russian and he was super helpful. I also had an ITMO buddy who was very kind and supportive.

After completing my Master’s, I would like to start my own company. I am highly interested in entrepreneurship and I think this is the right age to get started.

What would your advice be to the students who are planning to study at ITMO?

Do consider studying here. You will never regret this decision. The university is super friendly and welcoming. The education is affordable yet world-class. You will have some of the best days and months of your life here. I highly encourage everyone to apply.