All the way from Kolkata, India Devtanu is a Master’s student in robotics and artificial intelligence at ITMO. He is also an intern in Nancy, France where he is working on a project in thermal physics. In this interview, he shares his story of getting selected for this internship and successfully making it to France amidst travel restrictions. Besides studies, he is also a Real Madrid faithful and wishes to witness the Champions League final at the Stade de France in Paris. 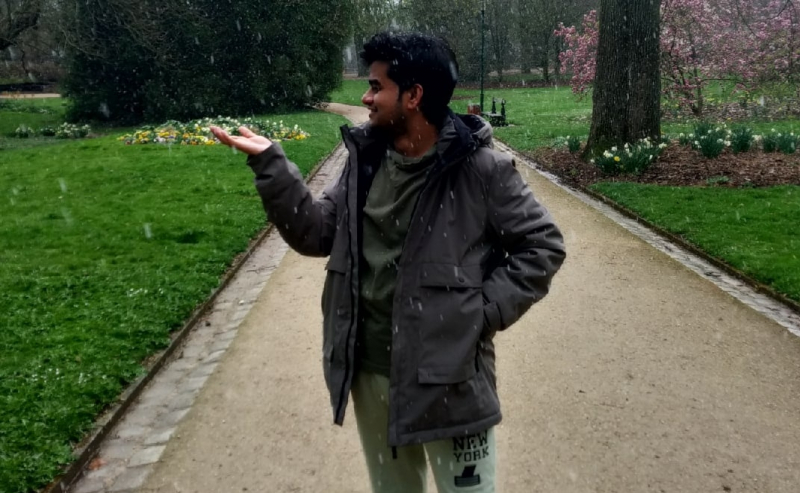 Where are you from?

I am from Kolkata, also known as the City of Joy in India. It is located on the east coast of the country surrounded by the Bay of Bengal. My city is the cultural capital of India. We boast some of the most talented people globally, such as Nobel laureate Rabindranath Tagore, Oscar winner Satyajit Ray, freedom fighter Netaji Subhas Chandra Bose, and scientist Satyendra Nath Bose, a pioneer in the Higgs-Boson particle discovery.

How did you come across ITMO?

I found out about the university from the Study in Russia website. I also had a friend at ITMO who I could reach out to. Moreover, I have an uncle who lives in St. Petersburg. He also gave me some insights into the life of a student in this city. Also, ITMO’s Telegram channel and VK page were very informative.

Was it difficult to travel so far from home?

It was to some extent but I got used to it well. I had a friend from India who accompanied me all the way from Kolkata to St. Petersburg. Once I got here, I made many friends from Bangladesh, Egypt, Syria, Vietnam, etc. We now stay as a group and have fun together.

Which dormitory do you live in?

I live in ITMO’s dormitory located on Alpiyskiy Pereulok 15. It is a nice place with many international students. We do a lot of activities together such as cooking, playing, and studying.

I am really passionate about it. During my Bachelor’s I fell in love with automation and design. I wanted to take it to the next level by learning new skills in AI. I looked for the best universities to study that and ITMO came out to be one of them.

Where did you study for your Bachelor’s?

Tell us something about your internship in France.

I learned about it in an article on ITMO.NEWS and applied for it through ISU (ITMO’s intranet portal). My responsibilities include thermal examination of graphite and other substances in RTA furnaces. Although it is more physics than robotics, my background in mechanical engineering helped me get it. I had to pass two rounds of interviews to earn my place.

How has your life been in France?

France is a gorgeous country. I really liked Paris. It is a beautiful city, indeed. I traveled from Paris to Nancy by train. The views outside were absolutely breathtaking. Nancy is not a very populous place but rather a countryside town. But nature is in its whole grandeur here.

Are you into sports?

Yes, I play football a lot. I am a huge fan of the Real Madrid football club. I am hoping to watch the UEFA Champions League 21/22 final here at the Stade de France in Paris. It will be a thrilling encounter between Liverpool and Real Madrid, two of the best clubs in the world presently.

Who are your favorite players from the current Real Madrid squad?

I really like the current squad. I am a huge fan of Karim Benzema and Luca Modric. I am also rooting for the youngsters like Vinicius Jr. I am sure this squad is more than capable of winning many trophies. Hala Madrid!

How did you cope with the winter in St. Petersburg?

Oh, that was an experience and a half! I knew it would be cold here but I was not ready for such a cold winter. The temperature was as low as -20 degrees Celsius. This was the lowest temperature I had ever experienced in my life. The weather was also very unpredictable. However, it did not take much time for me to get accustomed to it. With the right kind of clothing, you can easily survive St. Petersburg’s winter.

Are you fond of Russian food?

I love Russian cuisine. I don’t have a favorite dish, I like them all. My Russian friends had cooked some traditional dishes for me once, they were absolutely delicious. I also cooked some Indian dishes in my dorm. My friends loved them too. I am really missing my friends and favorite food here in France, to be honest.

I would like to do a PhD followed by a postdoc in robotics and AI. I have a tentative offer from a university in Milan, Italy. I would try to get it confirmed as soon as possible because I love Italy and I would definitely like to spend a few years there. Alternatively, I would like to get a job at RusHydro, the second-largest hydroelectric power plant in the world. It is uncertain at the moment, but I hope to sort my future out very soon.

Would you encourage the younger generation to study at ITMO?

Of course, I would. If anyone wants to study abroad, ITMO is the best place to be. It not only helped me earn a degree but also enhanced me as a human being. The professors here are very kind. They helped me get the internship in France. Once you are at ITMO, your career is bound to get a boost. Therefore, in my opinion, ITMO is a university you can surely trust.