DNA structure was discovered almost 70 years ago. Nowadays, scientists are not only able to decode the genome, but also to identify the functions of each gene and its sequences, as well as edit genes and create new ones. It all became possible thanks to the development of computer technologies and a new field of studies called bioinformatics. 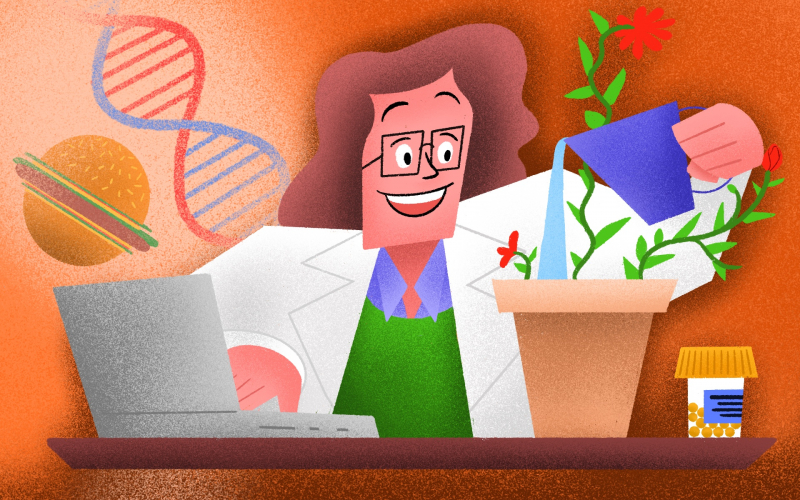 Anton Zamyatin, staff member of ITMO University’s International Laboratory “Computer Technologies” and Laboratory of Genomic Diversity, and Oksana Ivanova, graduate of the Bioinformatics and Systems Biology program and staff member of the Almazov National Medical Research Centre, explain what bioinformatics is, what its adherents are engaged in, and what it can lead us to.

Bioinformatics is an interdisciplinary field of studies that applies computer, mathematical, and statistical methods to solving biological tasks. Its definition is not fully established yet – it’s arguable whether it should be considered an independent field or just a set of computational tools applied in biology. If we focus on the word “bioinformatics” and its meaning, then we can say that it’s a field of studies that deals with informational processes in biology.

Where does it come from?

Humanity made a huge breakthrough in understanding biological matrix processes in the 1950s. First, James Watson and Francis Crick presented the DNA model, then Frederick Sanger decoded the amino acid sequence of protein insulin. It’s important to understand that matrix processes are informational processes. Genetic information is a code, and if there’s a code, there are computational methods. The first such task was protein sequencing, which involved determining the precise amino acid sequence of a protein molecule. Doing it manually requires lots of time and work. So, a program called COMPROTEIN was created for this purpose. Margaret Dayhoff, the mother of bioinformatics, created it in 1962.

Why do we need bioinformatics?

As we research the matrix processes, we realize that it’s impossible to cope with many tasks without computational methods because of the huge amount of data. For example, the human genome contains about 3,000,000,000 nucleotides. If each of them were to be encoded with one symbol, the entire genome would amount to 3 Gb. Modern biology collects enormous amounts of data each year. Computational methods and special algorithms are necessary to process it.

What fields use bioinformatics?

It’s applied in biology, medicine, and fundamental science to determine the DNA sequence (genome), RNA sequence (gene expression), and protein sequence (proteome). Human genome allows us to better understand not only general biological and molecular processes, but also see the individual differences between each person at the DNA level. It helps us pick the most efficient medication, treatment, diet, lifestyle, medical checkup schedule, and so on for each individual person. Bioinformatics is often used to find genetic causes of diseases. It helps diagnose correctly and prevent a disease if a potentially dangerous mutation is detected. DNA editing technologies are still developing and in the future they will allow us to eliminate the underlying causes of disease. Bioinformatics is also applied in drug development. It allows us to conduct experiments on a computer and accelerates the production of the most efficient medications.

Are there any more ways to apply it?

Bioinformatics is also a big deal in agriculture and ecology. It’s used both for understanding of the general principles of biological communities and for making agricultural production more efficient. In fundamental science, the field of systems biology appeared thanks to bioinformatics methods. It researches living cells and analyzes data as a whole, covering all aspects of informational processes.

Another field of bioinformatics came out of structural biology, a science that studies three-dimensional structures of biological molecules. Structural bioinformatics made it possible to model the structures in silico via molecular dynamics and statistical structural analysis. Researchers are able to model tertiary structures of proteins that aren’t yet studied – it’s called gene folding. They also model molecule interactions on a computer. For example, we can look for new medicine not only by mixing already known substances but also by modeling their target interaction – that’s called gene docking.

What do bioinformatics researchers do?

That depends on their field of work. In medicine, bioinformatics specialists help doctors by performing data analysis and sharing its results. As they say, a laboratory can be either “dry” or “wet”. In dry labs, there are only computers and scientists’ ideas – no real-life experiments are conducted there. Wet laboratories, however, interact with their objects of study directly, whether it’s a human DNA sequencing, or genome editing of a lab mouse. Nowadays, these two types of laboratories may be mixed: then, some employees deal with experiments and others analyze the data, create models, and do other calculations.

Is bioinformatics mostly about programming or biology?

There are many points of view. Some believe that in some cases, biology prevails (if a researcher has a background in biology), and in others – informatics (if they come from IT), with no intersections. Others think that a researcher in bioinformatics should be educated in both fields and act as a mediator between biologists and software developers. So, it’s better to pose the question differently: should a bioinformatics scientist have expertise in molecular biology, cytology, and genetics? Yes, they definitely should. Should they be able to analyze biological data via programming? Yes, that’s what they do. However, requirements vary in different fields. If a person is engaged in the implementation of bioinformatics software to process specific experiments, for example, to perform full-exome DNA sequencing, there’s no need for them to know lots of programming languages like software developers do – but knowing scripting languages, such as R or Python, helps a lot.

How can bioinformatics change our future?

Some think that after the era of space technology, robotics, and additive technologies, the era of biotechnologies will come. In this case, working in biotech will be like being an astronaut who landed on the Moon. There are countless ways to apply biotechnologies: from substance synthesis to plant, animal, and human genome editing. Technologically, we are ready for it, however, it’s either frowned upon or in a grey area when it comes to ethics and law. Bioinformatics and biotechnologies can’t develop as extensively as IT and telecommunications and needs to be strictly regulated. On the other hand, humanity needs to set its priorities straight and realize what our place in this world is, what we can change and what we shouldn’t.