This Monday, the 12th Fundamental Problems of Optics conference kicked off at ITMO University. This year’s key topics of discussion are quantum communications and the development of theoretical knowledge regarding 6G data transfer. 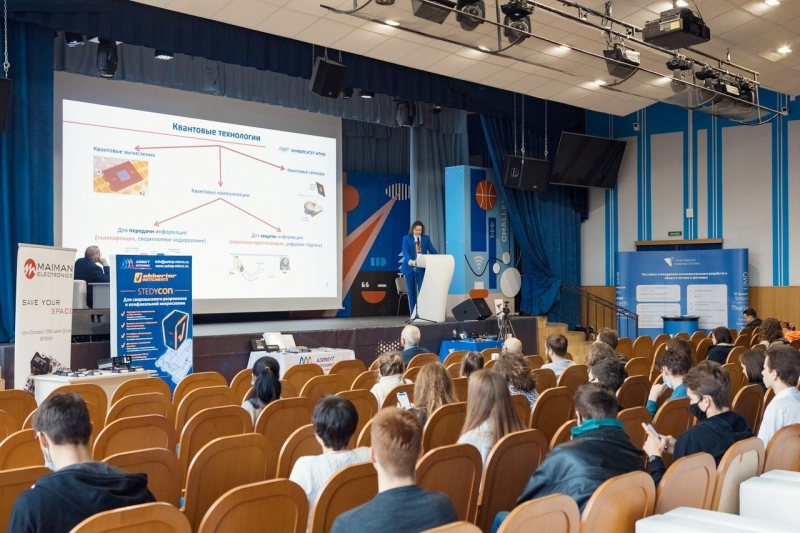 Opening day of the 12th Fundamental Problems of Optics conference

What are physicists and optical scientists’ latest achievements in the field of data processing and transfer? What breakthroughs have been made in the use of terahertz radiation? And what can modern optical science offer to medicine and biology? This week, these questions will be at the center of discussion at the 12th Fundamental Problems of Optics conference at ITMO University.

“Even though our conference still bears its original name, Fundamental Problems of Optics, it has since noticeably shifted towards practical research,” says Sergei Kozlov, deputy chairperson of the conference’s organizing committee and the head of ITMO University’s Faculty of Photonics and Optical Information. “We’re now more interested in how the solutions to fundamental problems that have been developed in the past two decades have been implemented in practice. Here’s a simple example: six years ago, a plenary discussion at the conference focused on the creation of quantum communications. Today, the plenary session will be held on the subject of achievements and prospects of development of quantum communications. There are plenty of achievements in question, and quantum comms technologies are practical products of immense national importance.”

Quantum communications were one of the subjects of Monday’s plenary session and the topic of a talk delivered by Vladimir Egorov, deputy head of the National Center for Quantum Internet at ITMO University. He spoke about the current state of quantum data transfer technologies and what engineers and researchers will need to accomplish in the near future.

“This is a highly relevant subject all around the world, and it’s being researched by all developed nations,” notes Vladimir Egorov. “In Russia, thanks in part to the efforts of our university’s staff, the quality of that research is quite high and is worthy of international recognition. It was 20 years ago at our university that Professor Yuri Mazurenko had invented a schematic and method for quantum communication using side frequencies of modulated radiation, and we’re continuing his work today.”

According to Egorov, many inventions in this field have originated from student projects, some of which he, too, participated in some time ago as a Bachelor’s student at ITMO University.

“Today, that work has evolved into a major branch of research at the university. We’ve got a number of partner companies, from small enterprises to our strategic partner – Russian Railways – with which we are planning to launch Russia’s first quantum network between St. Petersburg and Moscow next year,” he continues.

But it’s not enough to just encrypt and transmit information over quantum communication lines. It must also be protected from ill-doers who might intercept data as the light signal traverses the optical fiber line. Several speakers, including Sergey Mosentsov, an engineer at Leningrad Laser Systems, spoke on the matters of security. Mosentsov expounded on existing and upcoming solutions for quantum cryptography systems.

“The field is developing, and as new quantum key exchange protocols emerge, so do new ways of breaking them; it’s an arms race,” says Sergey Mosentsov. “In theory, these protocols are absolutely hack-proof, but the technology itself hasn’t yet reached the heights we’d want it to, so the reality is different. For instance, there are no sources of completely single photons. While scientists are working on that, there is no commercially available technology for now. This means that you could initiate a photon-splitting attack, stealing some of the photons to analyze while passing others through.”

In addition to security concerns, there is also the issue of proper infrastructure for quantum data transfer. Introducing new networks to major cities such as St. Petersburg, as well as laying communication lines between cities, would be too expensive. That’s why it’s necessary to find a way to adapt the existing infrastructure to work with quantum encryption.

“A great report will be delivered by Professor Ildar Gabitov from the University of Arizona. He’ll talk about the issues and goals of introducing quantum communications to regular communication structures that exist in cities or between them,” explains Sergei Kozlov. “It’s important that we learn how to use the same channels to work with regular and quantum communications. That’s a difficult task for nonlinear optics.”

The second talk delivered at the plenary session dealt with matters of laser spectroscopy. It was presented by Valerii Zapasskii, a senior researcher at St. Petersburg State University’s Spin Optics Laboratory.

“We’re talking about a conceptually novel area of MR spectroscopy that lies at the intersection of radio spectroscopy and optics,” says Valerii Zapasskii. “It’s a new way to study the magnetic resonance at the basis of which lies laser spectroscopy. This discovery was made here. In 1981, Eugene Alexandrov and I conducted the first experiment that proved the possibility of developing this method and using it in various applications. 20-odd years later, researchers at the Los Alamos National Laboratory reproduced the experiment and proved its applicability in solid-state systems. Now, it’s a widely used method of studying spin dynamics.”

The conference will also include a presentation of new research by ITMO University scientists on the subject of data transfer with the use of terahertz radiation. These findings may become part of the foundation for 6G technology. The event’s program also dedicates a great deal of time to new materials for photonics.

The conference’s partners will showcase their latest industrial products. Sergei Raskolenko, a representative of Azimut Photonics, has spoken about the newest detectors that function in various spectral bands – from ultraviolet to infrared.

“Today, most detector manufacturers aim to improve signal-to-noise performance and open up new opportunities this way. This is achieved through using various materials or low-noise preamplifiers and modern opto-electronic components,” he says.

Finally, the conference is also a place where scientists can not only present their latest research, but also exchange experience with prominent colleagues as well as students and young scientists.

“Our company supports young fledgling scientists on their path to becoming accomplished experts,” says Vladimir Sukhoveev, head of development at Integra Photonics. “Our work concerns the establishment of a domestic technology pool. And a key element of that is young specialists’ minds and their desire to learn and create things. You can fill up a technopark with the top equipment, but without the people who would spend hours using it and boosting their potential, skills, and knowledge, it won’t do much.”