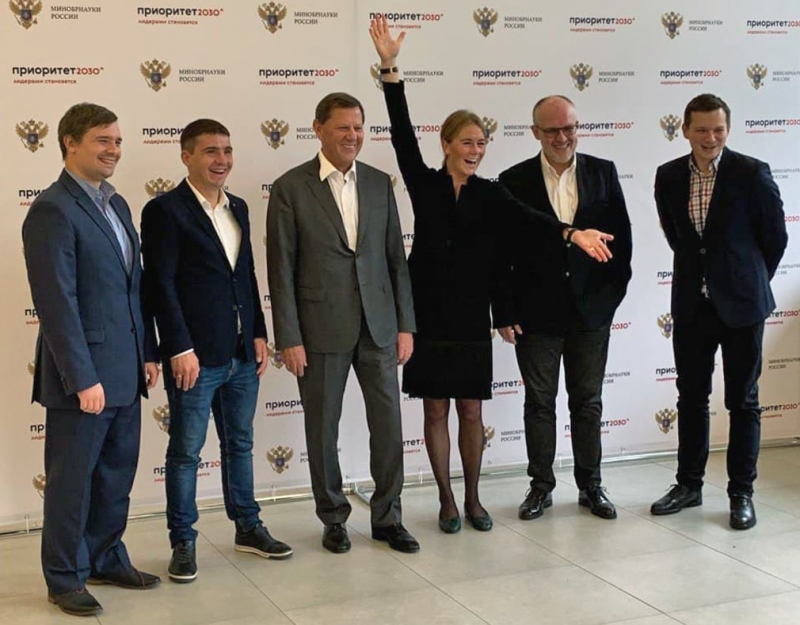 September 10 marked the beginning of the selection process for the national program Priority 2030. Its mission is to ensure the operation of 100+ advanced, modern universities in Russia by 2030 that will become centers of the country’s scientific, technological, and socio-economic development. In total, 187 universities will present their development strategies within the program’s qualifying stages. The final round will be held on September 25.

“All aspects of our selection procedures were ensured to be as transparent and clear as possible. I’m confident that the proposed strategies will serve not only the universities alone but also the country’s system of higher education,” notes Valery Falkov, head of the Russian Ministry of Science and Higher Education.

ITMO University was represented by Daria Kozlova, the program’s head and First Vice Rector, Vladimir Vasilyev, Rector of ITMO University, Vladislav Bougrov, head of the Institute of Advanced Data Transfer Systems, Alexey Slobozhanyuk, dean of the Faculty of Engineering Research, and Sergey Kolyubin, a professor at the Faculty of Control Systems and Robotics.

The pillars of the new program are four strategic projects. The first project, called ITMO.Impact, aims to scale and replicate the university’s best scientific and educational practices and create an open and accessible environment to facilitate collaboration with business, scientific organizations, the city, and the country. It involves the creation of joint laboratories with IT and innovation leaders, development of urban ecosystems, and participation in the digitalization of city services.

One of its major objectives is to develop an open educational environment for the widest audience possible and strengthen ties with both university graduates and student communities from other universities. Its key focus lies in continuing professional development programs, the organization of popular science events, and collaboration with other universities.

The Scientific Breakthrough project seeks to shift the focus of ITMO’s research activities from publication-targeted and theoretical to innovation- and project-based. Its goal is to produce results and findings beneficial not only for science, but for society and business, too.

Top-tier specialists familiar with the realities of the modern world will be trained within the Highly-Personalized Value-Based Education project. Its main task is to transform the educational process to meet the needs of both students and the labor market. That entails a brand-new approach to educational programs, particularly the so-called jigsaw education. This method would allow students to choose their own modules, courses, formats, and pace. Apart from that, they get to decide on the nature of their thesis, be it a regular paper, a startup, an art project, a scientific article, software code, or something else.

Due to the importance and complexity of the posed challenges, the university will also pay close attention to creating the most efficient work and study environment. Within the Well-Being project, ITMO plans to promote a culture of healthy living, conscious consumption, and respect for natural resources, as well as introduce systems to support students and staff’s well-being and mental health in light of today’s fast-paced way of life.

The mentioned changes will require a global transformation of the university structure. For that purpose, the university will introduce special M-platforms, which reflect a new approach to organization and management. The system is inspired by the principles of the platform economy widely used by a majority of today’s technological companies.

Learn more about the new 2030 Development Strategy on the official website.

The Russian Ministry of Science and Higher Education announced the launch of the Priority 2030 program on June 24, 2021. It is designed to enhance Russia’s competitiveness in the field of education, science, and technology. The changes are expected to be implemented within ten years and two stages: from 2021 to 2025 and from 2025 to 2030. The program expects no less than 100 participants who will receive an annual base grant of over 100 million rubles, as well as have a chance to receive a special grant and extra funding for research and industry leadership.