In 2015, the UN General Assembly declared February 11 the International Day of Women and Girls in Science. This way, the global community strives to provide them with full and equal access to science and highlights the fact that women play an important role in science and technology. In today’s ITMO.NEWS article, we’ll talk about five research projects by female scientists from ITMO University. 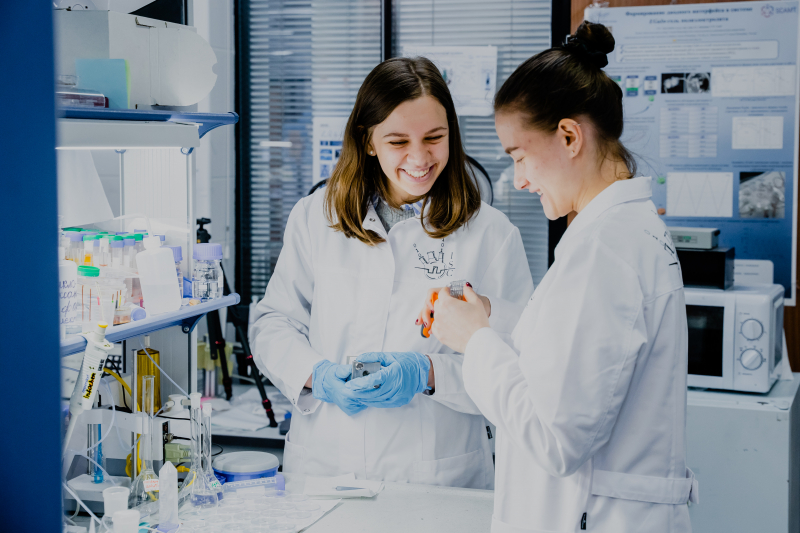 Elena Krivoshapkina, an associate professor at the ChemBio cluster

New ways to fight infections without the use of antibiotics are in demand when it comes to wound care and healing. The widespread use of antibiotics leads to the appearance of superbacteria, which are very difficult to fight. In 2020, Elena Krivoshapkina, together with scientists from ITMO University and the University of Toronto, created a new material – a biocompatible gel that kills microbes but is safe for human cells.

This material is made from modified nanocrystalline cellulose and gelatin that are connected via chemical crosslinking. This allows scientists to create a layer similar to the intracellular matrix, where body cells develop. Thanks to this layer, the gel heals wounds by creating favorable conditions for cell growth, resists the growth of bacteria, and indicates when to change the bondage.

To make sure that the gel works, scientists, together with ITMO’s research team in experimental oncology and immunology, conducted tests to study its biocompatibility. The antibacterial properties of the material were tested by a team of microbiologists from ITMO led by Elena Koshel, associate professor at the ChemBio Cluster. The results of the experiments confirmed the efficiency of the gel.

Elena Krivoshapkina discussed the invention in more detail in this article.

On current projects: “My research field is related to the study of biopolymers. Those are compounds with several levels of organization, unique properties, and biocompatibility, for example, silk and cellulose. We work on various ways to modify their surface – this allows us to create new materials based on biopolymers.

The achieved results can be applied in tissue regeneration, targeted drug delivery, implantology, as well as biocompatible sensors, detectors, and flexible electronics. For example, surgical materials based on spider silk are not only suitable for use mechanically and functionally, but also don’t cause an immune response, and, thanks to the antibacterial effect, prevent the development of bacterial biofilms and reduce the risk of infection.”

Alena Shchelokova, a researcher at the School of Physics and Engineering

Magnetic resonance imaging (MRI) is an efficient method for diagnostics and research of breast cancer. Early detection of the tumor gives a good chance of complete recovery, but this procedure is hardly accessible because the required equipment is quite expensive and not all hospitals can afford it.

In 2020, Alena Shchelokova, as part of a research team, came up with a new approach to this problem. The idea is to direct excitation and receive the signal using a special dielectric resonator. It focuses the magnetic field of the big coil (a part of all MRI machines) around the mammary gland. This device made of a hollow ceramic cylinder is cheaper than the commonly used receiving coil.

The test conducted on volunteers was quite successful: in terms of quality, the images obtained using the device were similar to those taken using the most modern analog available on the market. In addition, the new device significantly reduces the radiofrequency radiation, making the examination safer for the patient.

You can learn more about the project in our story.

On the current progress: “We’ve changed the design and made the device lighter, cheaper, and suitable for the usage in both 1.5T and 3T fields. Now it’s made of metallic wires and capacitors – plane-parallel plates on a dielectric pad. We’ve also added the opportunity to employ both components of the field. Thanks to this, the device was improved in terms of the efficiency of MRI signal transmission and reception. Medical specialists provided us with positive feedback, but also pointed out a couple of problems: some of the zones that must be scanned for diagnostics couldn’t be seen properly. To solve this, we’ve added a new modification and increased the visualized area. Now we’re working on a paper about our device and conducting the final testing on volunteers.”

Ekaterina Noskova, a first-year PhD student at the Information Technologies and Programming Faculty

In 2021, Ekaterina Noskova became the third scientist from ITMO and the first female student of the university to receive a grant from the Systems Biology Program, the expert council of which annually awards five researchers under the age of 35. The young scientist received 600,000 rubles to develop the GADMA (Genetic Algorithm for Demographic Model Analysis) program for the visualization of demographic history.

Now there are two simulators used for this: dadi and moments. If the user wants to use one of them to produce an allele-frequency spectrum (genetic data in a simplified form) or other statistics, then they will have to not only learn how to use the program, but may also face the inefficiency of the optimization algorithm. GADMA, on the other hand, works in a semi-automatic mode: the user simply selects a simulator, uploads data, and receives a ready-made demographic history, as well as its visualization and generated code. The result is more stable and realistic.

On GADMA and other research: “In the first year after receiving the grant, I am planning to expand the capabilities of GADMA by adding new methods for data simulation. The program previously supported only two simulation engines – dadi and moments. In September 2021, we launched a new version with another engine called momi, and now I’m finalizing the one with moments-LD. Also, during these six months, I’ve been working on a project on the application of Bayesian optimization for the derivation of evolutionary histories of four and five populations and presented the results at Probabilistic Techniques in Analysis: Spaces of Holomorphic Functions conference, as well as the Scienсу and Education Conference of ITMO University.”

Maria Egorova, a first-year student at the Faculty of Nanoelectronics

Maria Egorova became interested in the method of laser-induced mycoplasma as a school student and continued to research it at ITMO University’s School of Laser Technologies. Then she decided to create her own project on the optimization of conditions for glass processing using the laser-induced mycoplasma method. This is an important feature when it comes to large-scale production of microoptics and microelectronics.

In her research, Maria studied the plasma processing of glass at a target made out of polished graphite, as well as the conditions of the laser beam focusing and its influence on the processing. The project won the ITMO.STARS competition last year. Thanks to this, the young researcher entered ITMO University and now works on the creation of microlenses through various methods, including laser-induced mycoplasma, together with a research group led by Maksim Sergeev.

On current activities: “I’m gaining experience at the lab in a fascinating field. I hope that soon I’ll pass exams that will prove my ability to work with the equipment and will start a personal project of mine. As of now, we are discussing it with my supervisor, and I don’t feel like sharing the topic publicly yet, but it’s definitely connected to the laser-induced mycoplasma. I want to continue researching the physics of this method to make it more stable and to promote its use in science and industry.”

Uliana Noskova, a first-year student at the Infochemistry Scientific Center

Uliana Noskova presented a study on the immobilization of enzymes on the surface of a quartz sensor via piezoelectric microweighing. During research, she puts layers of polyelectrolytes on sensors, and then adds the uricase enzyme to study the behavior of such a setup. If the study is completed successfully, the resulting installation will be possible to apply to the regular carbon fiber.

The main goal of the project is to create biosensors that will help detect various organic compounds in biological fluids, such as uric acid. In practice, this might help track the condition of patients and diagnose diseases, for example, gout and diabetes.

On the ongoing research: “I try new polyelectrolytes to make my setup better immobilized at the sensor. Moreover, I plan to use not only uricase but other enzymes as well.”

We’ve shared more info on research by Maria Egorova and Uliana Noskova in this story.