Many may have seen bright pink light in some windows – it comes from special lamps that are used for providing sufficient lighting to house plants. Similar lamps are also used by farmers in greenhouses. Still, specialists in photophysiology argue that such lamps do not provide all the light that plants need. Scientists from ITMO in collaboration with their colleagues from Tomsk Polytechnic University came up with an idea to create light sources from ceramics with the addition of chrome: the light from such lamps offers not just red but also infrared (IR) light, which is expected to have a positive effect on plants’ growth. The research was completed as part of a Russian Science Foundation grant, and the results were published in Optical Materials. 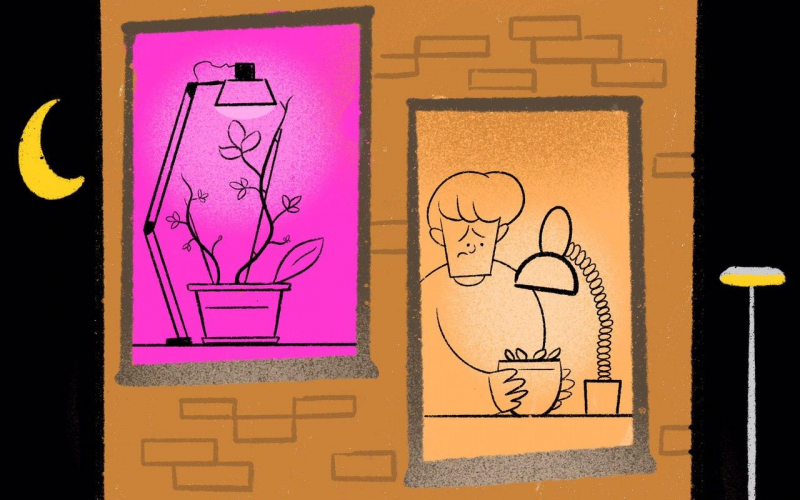 Growing vegetables, fruit and berries in greenhouses rather than in the open is becoming more and more common: in such facilities, plants are protected from  hail, draughts and chill. But for the future foods to grow faster, farmers have to pay close attention to the levels of humidity, temperature and light. And among other things, it is essential to compensate for the lack of natural sunlight.

Advanced agricultural facilities use light diodes for this purpose: they consume little energy, give bright light and can be easily set up in a greenhouse. The light they emit is pink, which is produced by simultaneous use of blue and red diodes. Such lamps are often used in apartments by those who grow houseplants as a hobby.

“Then again, researchers who focus on photophysiology found out that such lighting isn’t optimal,” says Anastasia Babkina, a lab assistant at the Faculty of Photonics and Optical Information. “Thing is, a red diode lights in the range of about 650 nanometers, and its spectrum is very narrow, similar to that of a laser. Plants, however, absorb light in a wide spectrum; when we grow flowers, fruit and berries in the countryside, the sun shines on them, so they get the full spectrum: UV, visible, IR light – and that is what helps them grow so well. What’s more, it turned out that plants absorb better in the range that’s a bit more than 650 nanometers, which people can barely see. So now, we use the light that’s more comfortable for humans and not optimal for plants, which don’t get the IR radiation they need.”

Glass with crystals inside

All this means that we need to find a material that can be used in light diode lamps in such a way that they would produce light of a wider spectrum, including the IR range. A group of researchers from ITMO and Tomsk Polytechnic University took up this task.

Classical red light diodes use materials based on manganese and europium compounds. The crystals of this chemical element make the diode emit at the wavelength of about 650 nanometers, making the light red, and jointly with the emission of the blue diode – pink. What’s more, it is the use of these crystals that make the emission’s spectrum narrow.

“We decided to use not a different crystal but glass-ceramics,” says Anastasia Babkina. “This is a transitive material between glass and crystal. What’s the difference? We have to specifically grow crystals, whereas glass is synthesized by moulding, and it can be produced quickly and in large amounts, in any shape you need. The drawback is that glass is fragile. For this reason, we take glass and begin to slowly crystallize it so that it doesn’t lose transparency. In result, we get glass with microscopic crystals inside that are invisible to the eye. Such a material is more sturdy, has better luminescent properties – and is called glass-ceramics.”

Chrome is added to glass-ceramics at the production stage: this gives the material a pink tone that allows it to produce red and IR light at the same time.

There are two potential applications for the new material.The first is to mill it to get microparticles which can be used to produce a new type of light diodes. This offers great prospects, but the introduction of such a technology calls for a lot of time and money. Another option is to use it to create lampshades.

“We can take blue and green light diodes and use our glass-ceramics as a filter to obtain a wide-spectrum emission that will include the IR range,” explains Anastasia Babkina.

The scientists have already created the samples of the new material; future experiments are currently hindered by the pandemic. The researchers hope to conduct further tests after the restrictions are lifted, which will show the magnitude of the new lamps’ effect on the growth of plants.