Researchers from ITMO’s ChemBio Cluster and University of Toronto discovered a nonlinear dependence of photoluminescence of carbon dots on the composition of a water and dimethyl sulfoxide solvent. The color of the same dot sample changes depending on the polarity of solvent it is placed in. Thanks to this discovery, the researchers were able to develop a portable wide-range (from -68°C to +19°C) temperature indicator, which can be used to control the storage conditions of chemical, pharmaceutical, and food products. 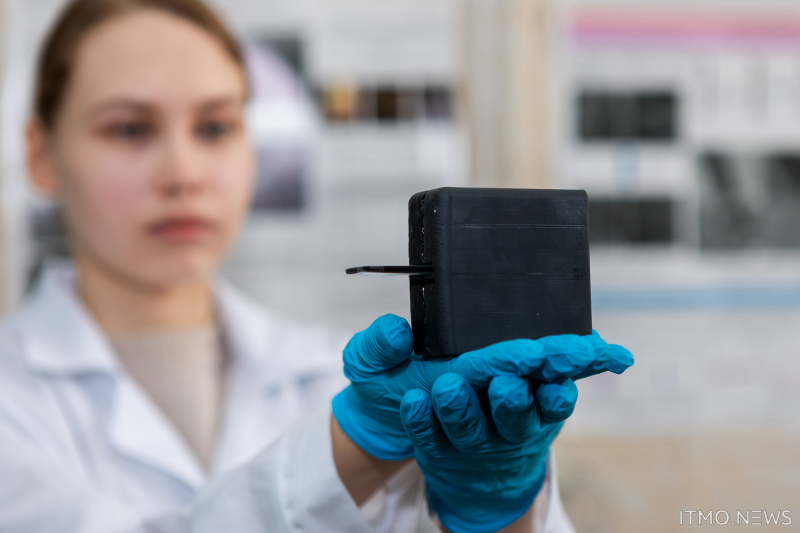 Certain products, chemical reagents, and drugs are extremely sensitive to even the slightest temperature shifts, which means that they have to be transported in specific conditions. Any temperature shifts can trigger the growth of bacteria rendering the product impossible to use. Temperature sensors come to the rescue in such cases, however not all those currently on the market can work with a wide range of below-zero temperatures. Moreover, they can be expensive and are not always accurate.

Researchers from ITMO’s ChemBio Cluster developed a nanostructured temperature indicator made from carbon dots synthesized on the surface of nanocrystal cellulose and a water-dimethyl sulfoxide solvent.

“Carbon dots have a wide range of scientific applications. Their main property is fluorescence, meaning that they beam when subjected to electromagnetic radiation with different wavelengths. Thanks to this, researchers can visualize chemical or biological processes. In this project, we, too, use this effect. We also make use of nanocrystal cellulose, which is a cheap, biocompatible, and eco-friendly material, however, we chose it for another reason. Carbon dots are usually synthesized from small organic molecules, such as citric acid, glucose, or recycled products, and then combined with a carrier to produce a film. In our case, cellulose allows us to have two processes in one place: it is both a carrier of the dots and a source of carbon,” explains first author of the article and a PhD student at ChemBio Cluster Anastasia Navrotskaya.

Thanks to the fact that carbon dots react to changes in the environment, as well as to the properties of nanocrystal cellulose, the researchers were able to produce a cheaper and more precise tool for identifying temperature shifts. Moreover, the water-dimethyl sulfoxide solvent allows the new device to function in very low temperatures and in the wide range of -68°C to +19°C.

Interestingly, the researchers initially weren’t planning to develop a temperature indicator. Originally, the heads of the project, Prof. Eugenia Kumacheva from University of Toronto and Dr. Elena Krivoshapkina from ITMO University wanted to produce carbon dots on surfaces of polymer structures with fluorescence in various ranges of the visible spectrum. This would have made it possible to develop 3D printed color images to protect products from forgery. However, the researchers were unsuccessful in this respect and were planning to close the project. Thanks to the discovery of a fundamental effect for carbon dots, the group was able to identify another practical application in a completely different field.

The  water-dimethyl sulfoxide solvent system has long been on the radar of scientists. On their own, the components’ melting points are 0°C for water and +19°C for dimethyl sulfoxide, however, when combined, the new melting point can reach up to -70°C. This effect is widely used in biology, for instance, when the solvent system functions as a cell cryoprotectant and preserves the cell membrane during freezing and defrosting. These very properties of the solvent led the researchers to the discovery of a nonlinear dependence of optical properties of carbon dots on solvent composition. As it turned out, in a solvent with a different polarity the dots can beam in the orange and red ranges when subjected to green light, for instance, from a laser pointer.

As a result, the researchers produced a sensor that consists of a reader unit with a chip, a green LED light, and two boxes. One of them contains a dry nanocrystal cellulose film with carbon dots on its surface, and the other – the water-dimethyl sulfoxide solvent. The ratio of solvent components depends on the temperature needed to maintain. For instance, if -68°C is the threshold, then the solvent will have 33% of water, and for a different threshold the volume of water will be different. When the temperature requirement is breached, the water-dimethyl sulfoxide mixture melts and pours onto the film with carbon dots. As a result, under the green LED light of the reader unit, the dots beam in the orange range. This way, the researchers can monitor if the temperature rose or remained at the needed level.

“Despite the fact that boxes with carbon dots and the solvent can only be used once, this can be considered as an advantage of our device. If at one time the solvent melts and saturates the film with carbon dots, there is no way to get the system to its initial state. This will make it possible for us to conclusively tell that the temperature in the room had changed,” adds Anastasia Navrotskaya.

The new temperature sensor is complete and in the future the researchers are planning to patent it before putting it on the market.

This work was supported by a megagrant from the Ministry of Science and Higher Education of Russia (Project No. 075-15-2019-1896), as well as NSERC Canada (Canada Research Chair Program and Discovery Grant).