The Indian researcher told ITMO.NEWS about her work, the promising applications of carbon dots, and the pleasant surprises St. Petersburg offers when compared to Calcutta. 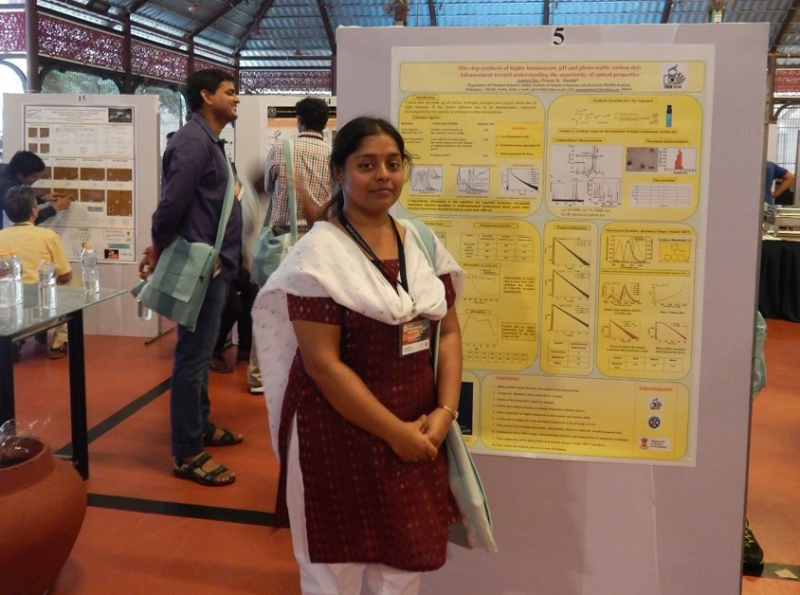 ITMO’s Fellowship and Professorship program annually attracts successful scientists from all over the world to bring their projects to life in St.Petersburg. One of such scientists is Ananya Das, a researcher from India who specializes in studying optical properties of carbon dots. We got in touch with her to ask about her project and learn how she spends her days during the lockdown, as well as what her impressions of St. Petersburg are.

Tell us a bit about yourself.

I came from India, I grew up in Calcutta, where I went to school. After that I got my Bachelor’s degree from Barrackpore Rastraguru Surendranath College and my Master’s degree from Presidency College, both of them belong to the University of Calcutta. After that, I decided to do research, so I joined the Indian Institute of Science, Education and Research Kolkata (IISER Kolkata), where I spent around six years. I got my PhD in chemistry there. After that, I started looking for a place abroad as a postdoc researcher. That is how I ended up here.

Why did you decide to do science and, in particular, chemistry?

When I was a kid, in kindergarten I wanted to be a teacher – back then I had no idea what doing research meant. When I was at school, I fell in love with science. In our system of education, we learn all subjects until we are in tenth grade – physics, languages, geography, history, etc. Most of all, I liked math. I felt comfortable studying natural sciences as they’re very logical, you only need to answer the questions to the point to get a good mark. It is different in other subjects like languages or history, where we needed to write pages after pages, it was a bit scary.

In India, we spend 12 years at school, so after tenth grade we can choose any field of education, and I opted for sciences. The classes also included lab sessions for chemistry and physics. Our chemistry classes were really impressive – there was always something happening right under our eyes. It all pushed me to study chemistry in college. However, after graduating from school I didn’t know I was going to be a researcher.

This understanding came to me at college, where we had a lot of wonderful lecturers who shared their research experience with us. They told us what it was, about its goals and integral parts. It was then that I knew what I wanted to do. Also, I felt great in the lab – doing experiments, using the equipment, it all inspired me.

What did you research in India?

After getting my Master’s degree, I took a special exam you need to pass to be a scientist. Then I had to be interviewed at IISER, and picked the department that suited me most – physical chemistry.

I was mostly drawn to spectroscopy, studying the optical qualities of materials. That’s why I picked the lab conducting research in this field – it was a new lab headed by Prof. Prasun Kumar Mandal, and it used brand-new approaches. It was one of a few labs in India doing research in single-particle spectroscopy.

We used cutting-edge equipment to study quantum and carbon dots and their optical properties. My focus was on carbon dots – when I started working with them, the nature of their photoluminescence was a highly debatable topic. And it is still studied today. I was one of the people trying to delve deep into that.

How will we benefit by knowing the roots of their luminescence?

If we know its origin, we can control its qualities. In nanomaterials, optical properties depend on structure, size and morphology– if we don’t know the structure, we cannot control the material to get the properties we need. How can we get a carbon dot to emit blue or red light? We need to know its structure to produce different colors of its radiation.

And how can we use this knowledge?

Carbon dots have many applications. They’re easy to synthesize, affordable, stable, and far less toxic than, say, quantum dots. In quantum dots we use high-density metals, which we don’t need for carbon dots. What we need is carbon, oxygen and hydrogen, which are all biocompatible. That’s why carbon dots can be used in live cells. I witnessed such an experiment.
Moreover, carbon dots can be used in photovoltaics, and in diode production. Though I have only been synthesizing these materials and studying their optical properties. My goal for now is to start applying them in real-life conditions – and that is why I am here, in St. Petersburg.

How did you learn about ITMO Fellowship?

I know Prof. Andrey Rogach, who heads a project here at ITMO. I sent him an email telling him I’d like to join his research group. He recommended I approach ITMO University, which he works with. He advised me to send a research proposal on carbon dots, and after following his advice I came here.

It is definitely a very good university. The most important thing for me is the lab – the atmosphere in it means a lot, it determines whether or not you will be able to work there without stress. That’s exactly how the lab is here, I truly like my colleagues, who are always ready to help me and show how to work with new equipment. There are a lot of devices here that I hadn’t worked with in India and I needed to get to know them well very quickly. So, yes, the atmosphere here is very nice.

What project are you working on here?

I am focused on applied research now – my supervisor here suggested to look at possible applications of carbon dots in solar power. In India, I didn’t study any actual industrial or engineering applications of carbon dots. I am hoping I can do it this time.
But before I dive into that, I need to first synthesize the material and study its optical properties. This is where I am now – and it was all put on hold because of the virus. I had to spend two months in my room! But I am hoping to be able to return to my lab next month, so that I can start with applied work.

What are the goals of this research?

That’s why my goal is two-fold – first, synthesizing the red-radiating dots, and second, using them to raise solar cell.

How long are you planning to stay in St. Petersburg?

I have a one-year contract that can be prolonged for three years. At the end of this year, I will have to report on my project, so that a committee decides whether or not my contract can be extended. I am hoping to prove that.

I came here from a highly populated Calcutta. The first thing, therefore, that I liked was that there were less people here – it really is great. There are less environmental problems, and a good public transport system! I can always find a vacant seat on buses or in the metro. In Calcutta, it’s impossible to even stand comfortably in a bus or a train! And the air there is highly polluted.

As for the climate, I arrived here in October, closer to winter, and it was the first time I saw ice on the roads! But I am enjoying the summer.

Do you have any favorite spots in St. Petersburg?

I had a plan to explore the city in the summer, as I couldn’t do it in the winter when I focused on my research. Sadly, I had to spend two months in my room due to the pandemic. But I am still hoping to get to know the city if I do get the chance to stay here.

Did you think of leaving when the COVID-19 crisis started?

No, I contacted the consulate to tell them I’d be staying safe in St. Petersburg.

What do you do in self-isolation?

Up until April, I kept working in the lab. Since then, I have been analyzing data for the last two months, staying in touch with Prof. Andrey Rogach and other colleagues. We’ve been discussing our results and I started getting a paper ready for publication. I’ve only stopped from time to time to watch a movie, listen to music, or make some food.