The discovery will help researchers make significant strides in the study of new targeted drug delivery methods, which is one of the most actively developing fields of modern science and medicine. 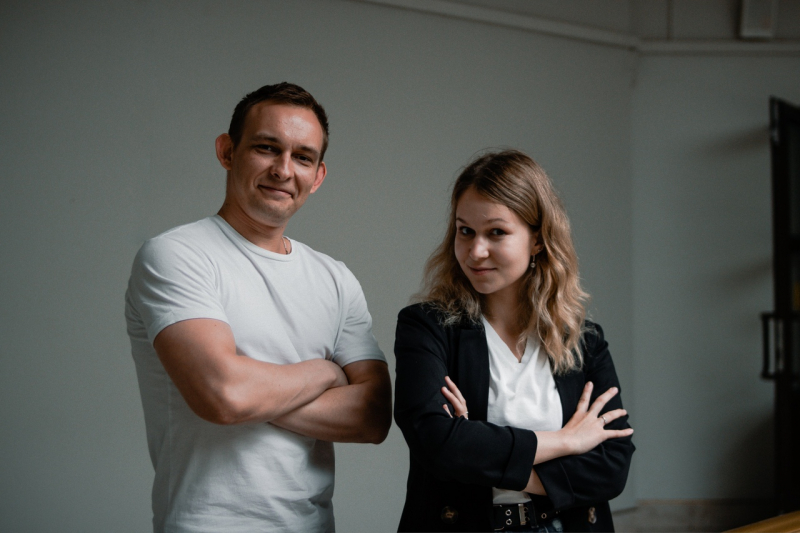 Mikhail Zyuzin and Elena Gerasimova, the authors of the article. Credit: ITMO University’s Faculty of Physics and Engineering

Calcium carbonate (CaCO3) particles are one of the most promising bioactive compounds. However, before their application in the field of  drug delivery, toxicity of CaCO3 particles should be checked, as well as their distribution inside the laboratory animal. The team of investigators from ITMO University’s Faculty of Physics and Engineering together with their colleagues from Russian Scientific Center of Radiology and Surgical Technologies developed the novel approaches to loading calcium carbonate particles with model radionuclides and studied the biodistribution of these particles in rats using positron emission tomography (PET). It was found that the size of particles influences the specific organ accumulation in vivo. The results of this study were published in ACS Applied Materials and Interfaces journal.

Calcium carbonate has many advantages compared to other inorganic materials. CaCO3 can be easily synthesized, its size and form can be changed, it is non-toxic and biocompatible. The surface of CaCO3 can be also modified with, for example, the layer-by-layer technique that allows to make these particles more stable in the biological liquids. Tannic acid (TA) and human serum albumin (HSA) can be used as compounds for the modification of particle surfaces.

There are several methods to probe the in vivo biodistribution. The most widely used is the bioluminescence imaging. However, this method is limited by light penetration depth into tissues and doesn’t provide high resolution.

Another popular method of in vivo studies is positron emission tomography (PET). It seems to be the most precise and efficient technique, as it allows us to examine the deepest layers of tissues at the same time providing the high quality and exact images. This technique allows researchers to estimate the biodistribution of radiolabeled carriers via the scanner. To perform PET visualisation it is necessary to deliver radionuclides to the certain area of the body. It can be done with help of, e.g., nanoparticles.

In the new study by the team from ITMO University’s Faculty of Physics and Engineering, calcium carbonate particles were labeled with radionuclide using different strategies and their biodistribution was tested using PET in vivo. The Radiolabeling Strategies of Micron- and Submicron Sized Core-Shell Carriers for in Vivo Studies paper was recently published in ACS Applied Materials and Interfaces journal.

The project was implemented in collaboration with the Russian Research Center for Radiology and Surgical Technologies.

As mentioned above, in order to use PET imaging, particles should be labeled with radioisotopes, for example, with gallium (68Ga). But it is impossible to incorporate radionuclides directly into particles. Consequently, it is necessary to use a chelator (e.g. DOTA) – a special molecule, which is capable of bonding metal ions with other compounds. However, gallium-DOTA complex is a low-molecular weight complex, so it can leak through the pores of the carriers. To avoid this problem, the compounds were additionally conjugated to HSA.

In total, three strategies for radiolabeling of calcium carbonate particles were developed:

“Three loading strategies can be divided into two groups,” says Elena Gerasimova, engineer at the Faculty of Physics and Engineering and one of the authors of the project. “The first two strategies include loading the radiolabeled complex into the particle layer, and the third strategy incorporates radionuclides into the core of a particle. It’s worth noting that we didn’t use pure calcium carbonate. Our particles were synthesized via layer-by-layer technology, which means that the particle was additionally covered with a polymeric shell. If we are talking about radionuclide incorporation into layers, we can link  68Ga-DOTA-HSA to the outer tannic acid layer, or attach 68Ga-DOTA to the outer HSA layer. The encapsulation of 68Ga-DOTA-HSA into the calcium carbonate particles core was achieved in co-precipitation reaction. We consider this method to be the most efficient one. It demonstrates the best stability in biological liquid and the leakage of radionuclides during the experiment is minimal.”

How the size of particles influence their localisation

The researchers also discovered the correlation between the body area where the particles were accumulated with the size of these carriers. All the experiments were conducted on rats.

A sample with radiolabeled calcium carbonate carriers was injected into the rat’s tail vein. After this, it was placed into a tomograph for three hours. During this time, the PET scans were acquired. In order to verify the PET results, rat’s organs were extracted  from the body and the level of radioactivity was estimated.

“We studied the passive accumulation of particles. It means that we didn’t modify them with any kind of functional-molecules or complexes that can only be attached to specific types of cells. For future application in biomedicine, we need to determine the zone of particles’ distribution in vivo. Since the developed microparticles were able to accumulate in lungs, they can be useful for the diagnosis of lung diseases, for example,” says Elena Gerasimova.

It’s too early to discuss the future of the therapeutic application. However, the prospects are quite promising. Firstly, further research into the correlation between the size of particles and their localisation will benefit the drug delivery. Secondly, in vivo studies of particle distribution open up new opportunities for diagnosis and study the cancers:

“The circulatory system of the diseased tissues, such as cancerous one, differs from that of healthy tissues. The diseased tissue has large pores. Through them, particles can penetrate inside and accumulate there. We can visualize their location. This way, we can detect tissues damaged  by cancer and examine the metastasis,” says Elena Gerasimova.

However, it is preliminary to talk about the efficiency of this method, until no additional research has been conducted. Right now the scientists are planning to focus on experiments that include decreasing the size of particles and their modifications.