Today, on August 9, we celebrate the International Day of the World’s Indigenous Peoples. Their art offers a wealth of storytelling, beauty, and inspiration. 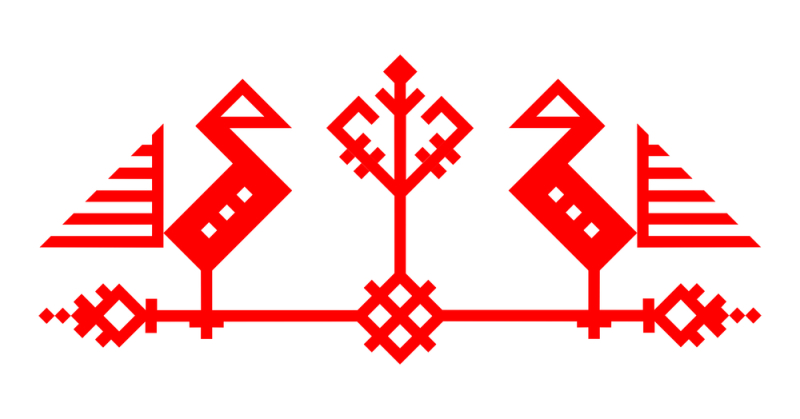 Credit: Ornamika. “MAIDEN MOTHERS” AND A “MAIDEN” ON THE HEM OF AN OLONETS WOMAN’S SHIRT. Second half of 19th century. Embroidery. Olonets Governorate province. https://ornamika.com/collection/3013/

According to the Russian Census of 2010, about 80% of Russia’s population are ethnically Russian, while roughly 20% (about 30 million!) represent other nationalities. Among them are both minor peoples with less than 50,000 representatives living in Russia and titular nations that form independent states or autonomous areas. Regardless of their current population, each has their own unique features that can be most vividly seen in traditional applied arts.

It’s easier to learn about one specific indigenous group, or a family of them, such as the Finno-Ugric peoples, as there are institutions and organizations that help spread awareness of their culture and preserve it.

However, if you just want to find out more about Russian indigenous peoples in general, it might be harder to do due to the lack of a centralized platform and huge number of such peoples.

One of the tools that might come in handy here is Ornamika, a digital archive of patterns, or ornaments, a traditional decorative art form common among most peoples. Its collection includes more than 8,000 patterns created all over Russia from the 9th (or earlier!) to the 20th century. Given that they can often be found on everyday clothes and objects, it’s amazing how detailed and delicately made they are. At the same time, they’re not only decorative but also tell stories of how their creators perceived this world.

Ornamika is fully available in English, including brief descriptions of each object – making it a real goldmine for anyone interested in traditional cultures. Another fascinating section of the website is Interpretations, where you can find modern art projects inspired by traditional motifs. For example, see this print created by Yana Kuznetsova – it’s inspired by ancient artefacts of the Pazyryk culture (Altay Mountains):

As another way of bringing traditional art into the modern world, Ornamika also has a lab that is engaged in making graphic prints out of historical patterns from all over the world.

To browse the ornament collection itself, go here. Even though the ornaments can’t be sorted by peoples, you can still browse the collection by region and in such a manner, discover the art of peoples inhabiting it. For example, try picking the Chuvash Republic category and you’ll see dozens of ornaments created by masters of this region.

Alternatively, search by type, century, or composition. Some of the indigenous peoples’ ornaments are also represented and analyzed in these compilations. For example, check out the story on Udmurt decorative art, or this one on the ways in which the spring season is represented in art of different regions.

If you feel like learning more about the cultures of various peoples inhabiting Russia, we also suggest paying a visit to the Russian Museum of Ethnography located in the center of St. Petersburg.