Ekaterina Mashina didn’t get enough Unified State Exam points to enter ITMO University, but still enrolled thanks to the ITMO.STARS contest with her IBolit project. This initiative aims to combine the efforts of students and staff from ITMO University, Pavlov First Saint Petersburg State Medical University, St. Petersburg State University and Moscow State University for achieving a noble goal: the creation of a system for providing highly qualified premedical care in Russia’s outlying regions. ITMO.NEWS interviewed the student about the details of her project and her plans for the future. 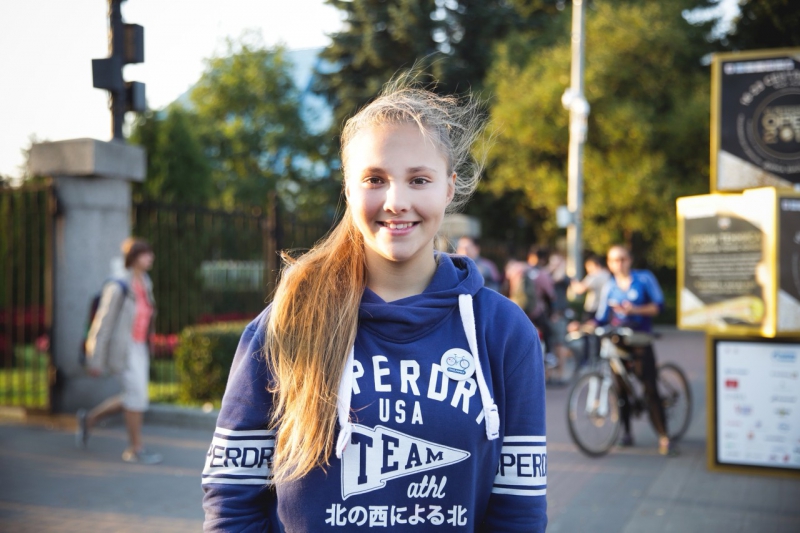 Tell us more about your project

I’ve wanted to become an ecologist ever since I was little. Still, I chose programming as my future profession due to a promise to my severely ill grandmother: to create a common advisory system that would be aimed at not doctors but patients, which will help them identify their condition, and make it possible for their close ones to acquire basic first aid skills: bandaging, administering injections, etc.

Such a system would’ve made attending to the sick simpler, and give their relatives confidence in that they’re really doing everything possible for their close ones. Medical specialists already have all the necessary information; all that needs to be done is to execute it in a user-friendly format and make it accessible to the public.

So, I started working on the concept of IBolit, a premedical care system that is based on the work of volunteer medical teams. I also decided to enter ITMO University where I could acquire the necessary technical skills. Right after I got accepted, I started to put effort into organizing interuniversity cooperation between ITMO and other leading Russian universities on IBolit. Therefore, their students will get the opportunity to do research projects that will contribute to this telemedicine project.

For the time being, this interuniversity cooperation exists as groups of enthusiasts only, but I am sure that the universities will also launch official collaborations within IBolit’s framework: this way, medical universities will get access to the latest inventions in the field of Big Data processing, and specialists from ITMO University will benefit from yet another application field of their AI-related research.

How will it work?

First of all, I want to say that I believe that in our country, there are volunteer medical teams (as is the case with volunteer fire brigades). This is why IBolit won’t be developing from scratch, but will make use of the existing groundwork and resonate with those citizens who are always ready to help their fellow people and are vitally interested in getting highly qualified medical assistance from volunteer teams if need arises.

The proposed system involves the following:

- an operational framework for organizing volunteer teams (IBolit-Rangers) that can provide premedical care according to the project’s standards;

- a set of scenarios on providing premedical care that are approved by relevant medical organizations and can be practiced by IBolit-Rangers;

- IBolit-Briefcase, a kit with medical equipment and software that will be provided to volunteers;

- IBolit-Tutor, a system for continuous training of medical volunteers;

- IBolit-Hub specialized centers that maintain the project’s cooperation with local medical organizations and institutions (can be affiliated with local hospitals or medical centers responsible for particular territories).

Let me put it straight: though the project sounds a bit futuristic, at its current stage, it is already being implemented by normal, but very motivated people.

One of them is a student of St. Petersburg State University and a future doctor; another is myself, a programmer from ITMO University. By combining our knowledge, we’ve already done the groundwork for IBolit-Assistant and IBolit-Tutor. What’s more, I’ve also involved my friends from the Artek children center who are also interested in changing the world for the better.

One of them is a student of Moscow State University who’s now working on “the model of functioning of IBolit-Rangers and IBolit-Rules within the country’s legal framework”, another one from Saint Petersburg State University of Economics is working on IBolt’s business model and developing ways for attracting financing for the project. Also, my friend from St. Petersburg Polytechnic University is addressing the issue of IBolit-Briefcase’s assembly.

Personally, I am acting as both the project’s developer and team lead. In September, I presented IBolit at the IV “Energy of Opportunities” Business Forum where I wanted to find sponsors for the project’s initial stages. And now, I am preparing a big presentation at ITMO university and looking for new members. We are currently in need of specialists in AI and neural networks, as well as help from lecturers and research advisors in looking for grants and other types of financing.

Are you ok with being responsible for such a major initiative?

I really like working on “almost unrealizable” projects and taking responsibility for the whole team. Plus, I think that one shouldn’t be afraid of trying to change the world for the better.

I have to say that it was Nikolai Pshenichny, a specialist from ITMO’s Career Guidance and Scouting Office, who helped me realize that. After winning ITMO.STARS, I explained my project to him. He was really interested in IBolit, and asked me a lot of questions, most of which had to do with “Why develop such a project?”. It was if he tried to make me pay even more attention to the issue that I already considered solved. As a result, I made several changes to the project, which was a bit too idealistic at first; thus, it became more earth-bound, and more realistic, as well.

Also, as I’ve already said, I have a strong personal motivation.

Do you have any experience in conducting such large-scale projects?

Yes. In my 10th grade, I participated in ITMO’s “People Need You!” contest with my own project on promoting recycling. My classmates and I wanted to acquaint people with behavioral patterns of an eco-friendly lifestyle: conducted volunteer clean-ups, placed containers for separate collection of cells and light bulbs, and organized business games and roundtables for school and university students.

It took us only two months to bring our project to a municipal level. Still, we soon learned that people really lacked basic ecological knowledge, so we decided to develop and implement an educational project for school children that would serve as a springboard for launching a system of continuous environmental education.

This is how we came up with the “Green Race”. Together with our followers, we’ve developed a course of continuous environmental education. It worked as follows: “mentors” from the 6th grade supervise groups of 1st graders; every week, they conduct specialized lessons, play business games and involve them in ecological activities. This contributes to establishing bonds between the school’s students, and in several years, today’s students become new “mentors”. As of now, this program is being introduced in 12 Russian cities thanks to the help from the Russian Geographical Society.

Is working with friends difficult?

You’re implying that it’s hard to hold your friends to account? I don’t really know. For now, I’ve only been working with people who do it because they believe in our project, and not because they’ve been told to.  I suppose good people get attracted to each other. Surely, we argue a lot when we are about to face deadlines, but we never had any major conflicts. And if someone realizes that they are no longer interested in what we’re doing, they can quit, and we won’t hold it against them. We’ll remain friends nonetheless.

For the time being, my plan is to continue studying technologies for creating IT solutions at ITMO University. The atmosphere at the university is just great. What is more, they treat us as today’s most promising brainiacs, and expect us live up to their expectations. At the moment, I’m also trying to share my knowledge with those who are planning to join our university. On my VK page, I regularly post various life hacks for students, as well as interviews with people who give good advice on such issues as choosing your career path or training for your exams. I think that such content can be a great help in choosing the right field at ITMO University and entering the university of your dreams.

I am sure that you can change the world even if your dreams seem impossible to achieve. Who knows, maybe in five or ten years at ITMO Highpark you will the find the headquarters of the global telemedicne project iBolit.