A recent session of ITMO University’s Coordination Council included an interim review of the first projects implemented as part of the university’s 2030 Development Strategy. Four teams reported on their progress thus far; instead of a formal report, the defenses took place as open discussions. In addition, project members conducted tours of their laboratories and showed their working process. Read on to learn more in this ITMO.NEWS report. 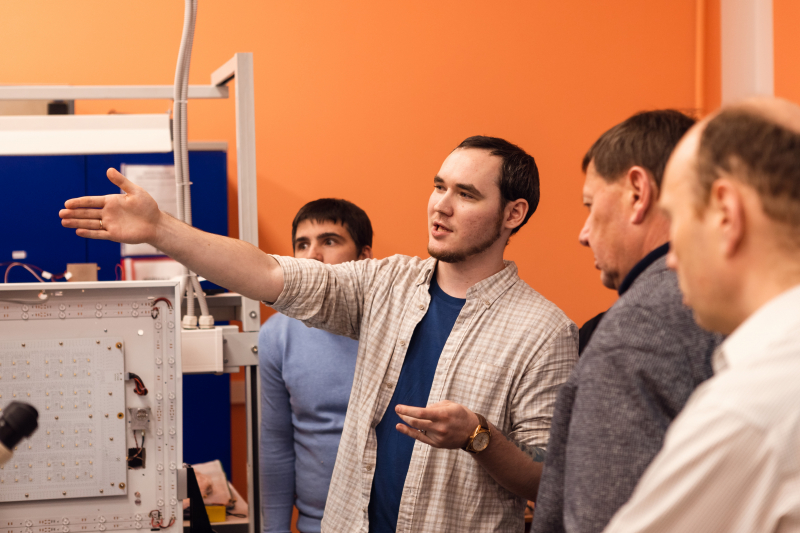 ITMO University’s 2030 Development Strategy was first unveiled in August 2021. The program aims to undertake an in-depth transformation of the university and its internal processes. It consists of four strategic projects and a special system of the so-called M-platforms.

To support its implementation, the university held an open call for projects, with participation available to students, staff, and external parties. As a result, 31 projects aimed at accomplishing the strategy’s goals were approved. Most of the teams have already begun their work and will present their projects in June 2022.

Meanwhile, the first teams to produce results have demonstrated their accomplishments at a session of the Development Strategy Coordination Council. The first wave of defenses involved heads of four projects:

The defenses took place in a multi-stage format: in addition to presenting reports on their current progress, the teams hosted tours of their laboratories to give a hands-on look at their working process. Members of the Coordination Council visited the Laboratory of Single-Photon Detectors and Generators and the robotics laboratories of the Faculty of Control Systems and Robotics.

As noted by Daria Kozlova, ITMO’s First Vice Rector and head of the Development Strategy, this format is much more effective than a regular report.

“It’s one thing to write a 200-page review, and another – to show people what you’re really doing at the lab. I find this a very correct approach and I believe we need to continue learning about our teams in this manner. It’s great that we have things to discuss beyond paperwork, that these defenses have been truly informative. Another valuable insight came from switching from the attack-defense, question-and-answer format to a dialogue: ‘Don’t you think that…? Why is that so?’ It’s great that such a culture is developing here,” comments Daria Kozlova.

The first to speak was a team from the Information Technologies and Programming Faculty. Its members are working on developing ITMO’s culture of academic competitions and working with talented school and university students. Andrey Stankevich, the head of the project, elaborated on the events and actions already undertaken, as well as those in the plans.

According to him, one of the most notable achievements was the launch of several competitions at the national and international levels. Last December, a large-scale national team-based competition was held at 50 venues around Russia and involved almost 900 participants. Another key event will be the Northern Eurasia Contests (NERC) – a regional stage of the International Collegiate Programming Contest (ICPC), the world’s most prestigious programming competition. NERC is slated to take place in April 2022, but the qualifying rounds have already taken place and involved over 5,000 participants from 16 regional groups.

A second key area of focus for the project is the development of the educational platforms olymp and Codeforces. The olymp website will now host physics competitions and has been enhanced with services and materials (including video-breakdowns of tasks) to help users prepare for competitions. Meanwhile at Codeforces, the massive collection of educational materials created by its users over the years has been cataloged on a large scale. As a result, they are now sorted into 217 categories and users can build a skill tree from materials on topics like competitive programming, algorithms, and data structure.

Finally, the project’s third major goal is to develop a system of training and support for school and university students. That includes a system of clubs, which currently already involves 290 school students (with winners of regional stages of national competitions studying for free), as well as open training sessions and meetups.

Apart from that, the project team not only provides guidance to students, but also creates professional development programs for lecturers so that they, too, would be able to train their students for competitions. As part of that endeavor, 13 orientation sessions have already been held and a 24/7 support chat and Telegram channel have been launched; the latter has over 2,000 readers. Moreover, the team has launched unique professional development programs for teachers on the subjects of competitive programming and the Unified State Exam in computer science. The courses are completely free, and 34 “students” are already involved.

“The hierarchy of talented academic competition participants resembles a pyramid. Our task is to work in two directions: to raise its top and to expand its foundation. I believe we’re making advances in both. As university staff, we’re interested in attracting the best prospective students, which is part of the project’s premise. Developing these services and events makes ITMO University a place where, from the point of view of future and current students as well as our fellow teachers and lecturers, interesting things are happening,” says Andrey Stankevich.

Svyatoslav Oreshin, the head of the Learning Analytics project, presented a number of projects, the key among them being a service for the creation of individual learning tracks. ITMO.TRACK is an algorithm that will pick disciplines and educational programs based on an applicant’s personal interests and career aspirations, as well as allow students to adjust and redirect their learning tracks during their studies. The developers expect this system to help maintain a high level of motivation among students throughout their time at the university, and, most importantly, help those who realize they didn’t choose the right faculty when applying.

The algorithm will suggest relevant educational programs based on a user’s skills and competencies, as well as suggest supplementary modules and courses based on their interests. A shared pool of internships, practical training programs, conferences, and events will also be compiled.

At the moment, a prototype version already exists: the team is done with the design and the key UI, a database of educational disciplines, and a search algorithm for keywords and tags. In the summer, when the admissions campaign begins at ITMO, the team will conduct the first large-scale pilot test of their system.

Two other products in development by the team are ITMO Lens – a video analytics service – and the Learning Analytics platform. Right now, ITMO Lens is already being used to assess the capacity of classrooms via video feed, but the team is already working on computer vision algorithms capable of identifying students’ emotions and evaluating their level of engagement – and, therefore, the quality of teaching.

The project also involves Master’s students who specialize in computer vision. According to Svyatoslav Oreshin, this will help establish an effective model wherein projects are integrated into the university’s own ecosystem.

“We already have an agreement with Master’s students to provide them with data and tasks. We’ll be able to adopt a model similar to those used by Stanford or MIT, where students learn by making an actual impact on the university rather than working with synthetic data. This way, we’ll use our work to not only improve the quality of life at ITMO, but also contribute to education,” he explains.

Some of the defenses were held on-site at laboratories. A team headed by Sergey Kolyubin gave a hands-on demonstration of their results, not only describing new robotic control methods, but also showing them in action.

A team mostly composed of varied-level students of the Faculty of Control Systems and Robotics has developed software based on unique algorithms that will make robots more autonomous and adaptable. For one, they have designed a system that allows robots to identify and classify objects while carrying out actions – in other words, to learn on the go. The results were demonstrated with a manipulator robot that sorts objects of arbitrary shape.

Another project developed by the team is an automated room mapping system with real-time semantic annotation of objects. What this means is that a robot equipped with an advanced neural network is able to not only detect obstacles while moving, but to also understand what type of space it’s in and what sorts of objects it’s “seeing” – be they people, furniture, doors, walls, etc.

A third project concerns the development of regulators for collaborative robots to help them independently calculate the strength of movement and rapidly adjust their movements, making such robots safer for working alongside humans.

According to Sergey Kolyubin, it was important for the team to not just develop the software, but to demonstrate its performance in real-life conditions:

“We wanted to show that in addition to producing fundamental scientific results, we’ve also brought them to a certain extent of technological completion. The examples we picked for our demonstration were based on the applications we’re discussing with potential clients. One application is in engineering supervision on construction sites – Gazprom Neft, for instance, is looking for such solutions. The sorting robot may be of interest to Sberbank, as they have a logistics department and are actively investing into the robotization of their warehouses. We’re also in talks with various companies about our contact-operation-capable systems,” says Sergey Kolyubin.

Another project that combines fundamental science, education, and practical applications is Communication Systems for Cyberphysics. Plans for the project include the establishment of a quantum testing ground for the development of technologies for atmospheric optical data transmission and the quantum Internet of Things. The project team plans to develop complex devices for wireless optical communications as well as work on optical neuromorphic and quantum computing for rapid data processing, all in collaboration with Gazprom Neft. The developers also plan to launch a center of expertise and develop unique continuous training programs on the subjects of quantum internet and radiophotonics.