ArtMasters is a specialized competition that aims to discover and support professionals in creative industries. Among the event’s partners are leading Russian cultural institutions, ministries, and media companies. This year, Daniil Zuyev, a Bachelor’s student in computer technologies in design, won in the category Virtual Worlds Design, receiving half a million rubles in grant money and landing an internship at the virtual technologies department of Ostankino Television Technical Center. We asked Daniil about the world he created for the contest and the benefits of competing in such tournaments. 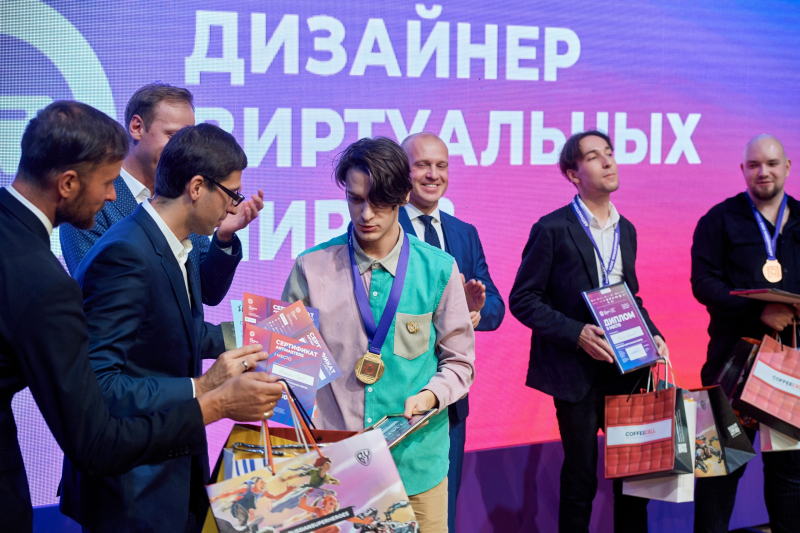 How did you learn about the contest and why did you decide to participate?

I generally try to take part in various competitions. For instance, I learned about ArtMasters last year and thought I had the potential to win in the category Virtual Worlds Design. Last year, however, I couldn’t get through the qualifying round, landing 11th there. I believe this was because I didn’t properly follow the requirements: we had to create a museum-like exhibition space, while mine was a meteor crater with pictures hung all around it. I think it turned out a little weird and inappropriate.

This time, the task of the qualifying round was connected to the 100th anniversary of jazz, so I created an abstract space with an amphitheater and a stage with musicians. This entry got me to the finals, even though I had my doubts about it – I didn’t really like how it turned out.

And what about your submission for the final round? Do you think it came out better?

It is definitely a stronger project. I worked at the top of my abilities and thought through its every step. At this stage, the judges evaluated not only the resulting video, but also my presentation of it and the way I interacted with my team during the whole production process.

What was the creative process like behind this video?

My task was to create a virtual world connected to the Russian city of Kostroma. Together with my team, including makeup artist Ekaterina Kondratyeva (who took second place in another category with our project) and screenwriter Lydia Yartseva, we took inspiration from the legend of Kostroma, a woman who drowned herself after a tragic love story and turned into a mavka (the word for a mermaid in Slavic myths – Ed.). The video starts with Kostroma appearing at one of the city’s museums as an exhibit – there, she is surrounded by Kostroma dolls and an Aivazovsky painting, all of which I modeled for this scene. Kostroma comes to life and looks around. Her eyes land on a country landscape; she touches the painting and is transported to her homeland. There, she sees fires lit in celebration of Kupala Night and magical creatures from Slavic myths, as well as the Kostroma wooden architecture museum. I used Google Maps to make the landscape, but the building is the result of my own imagination, a mixture of different ancient edifices. As for the magical creatures, they came from traditional Kostroma embroidery of the 17th-18th centuries.

By far the hardest task was filming the video. In order to do this, we traveled to Ostankino, to a studio with large LED screens. There, we had to adapt our virtual world to the studio to ensure a high resolution and interactivity. I had to write a script that would turn on the light when you touch the screen. We had only two hours to film, but we managed to fit everything in thanks to our mentors, who helped us set it all up and launch it.

What Is the Metaverse?

Had you ever worked with LED screens before? Was it possible to do without them – for instance, by using a green screen?

It’s a new technology that had only just found its applications in cinema and production – for example, it was used to film The Mandalorian. LED screens are highly useful when you need real-time graphics because they can create the necessary lighting for the actors and make it possible to instantly change the surroundings. However, they are naturally much more expensive than the ordinary green screen.

The competition’s requirements stated that our virtual reality had to be designed for this particular production technique. I had to quickly watch many how-tos on it, and I can’t overstate the contribution and help of our technical team.

Seems like you had quite the chance to boost your skills as you worked on the contest entry.

That’s true, I had to learn quite a lot of the aspects from scratch. For instance, I hadn’t really used Unreal Engine before, even though I’d been meaning to – and here we had to use it for the video. Luckily, I had a lot of help from my mentors and other participants, who had more experience and had already won grants from the likes of Epic Games before. Overall, our communication was very friendly: we didn’t really compete for the prize, we were ready to help each other.

What do you think helped you win the second time around?

I think I became more mindful in the way I approach the tasks. I anticipated many challenges and came up with fixes to problems in advance. In other words, I realized that it is a serious matter and treated it accordingly. There is much to learn on the technical side, but I can already do quite a lot with what I know now.

I believe also that I benefited from what I learned in a year at ITMO. For example, the course Fundamentals of Composition equipped me with a basic understanding of how a space can be structured. Soon, we will also start working with Unreal Engine. Naturally, if you want to make something incredible, you will have to learn a lot more than what fits into the curriculum. But a university education definitely gives you fundamental knowledge and ignites your curiosity for your own explorations.

How are you planning to spend the prize money?

It has to be spent either on equipment, additional courses, or a project. I already have an idea for a project, but I am not sure if I will need any additional funding there, so I think I will just save the money for now. Later, I might need it to pay for my education.

What is this project that you have in mind?

I want to continue developing a project I did involving children’s drawings (as part of the premise, Daniil turned the monsters drawn by students of an inclusive center into 3D models and sold them as NFTs; part of the proceeds went to charity – Ed.). This time, I would like to collaborate with the makeup artist and costume designer I met at the competition to create a virtual and real-life clothing line based on children’s sketches. And I think it would be great to let users color it in. I want to do more than just T-shirts with prints – something interesting and artistic. I believe it will not be a complicated task, seeing as we have all the necessary skills already.

Moreover, I would love to have these clothes presented at a fashion show, and I already know what it would look like. It has to be held in a room with white walls, which visitors will be able to paint on with crayons. The clothing line will be presented on screens and projected onto the walls.

What I would love most of all is to create a happy interactive space – for adults rather than for children, even. It would be a place where everyone could escape the depressing news to spend some time drawing and feel pure joy.

What about the Ostankino Television Technical center – will you accept their internship invitation?

I am really hoping it will work out. So far, I was invited for a pre-graduation internship at the Ostankino animation studio. The team there is working on a new children’s show, and they need a virtual environment for that. For now, we have agreed that I will work on my competencies and join them.