Battle of the Capitals: St. Petersburg Takes Home the Prize

The first-ever Tournament for Two Capitals in robotics, held in Moscow, culminated in a grand relay race that combined elements of all the tasks from previous stages of the competition. In a tense, but joyful race the select team from St. Petersburg gained victory. Over the course of the tournament, the children learned not only how to solve engineering and software issues on the spot, but also how to work in a team, support each other and root for others, even their rivals. The aspiring robot builders were supported by their trainers, who were just as anxious about the outcome as the players themselves and their families and friends. 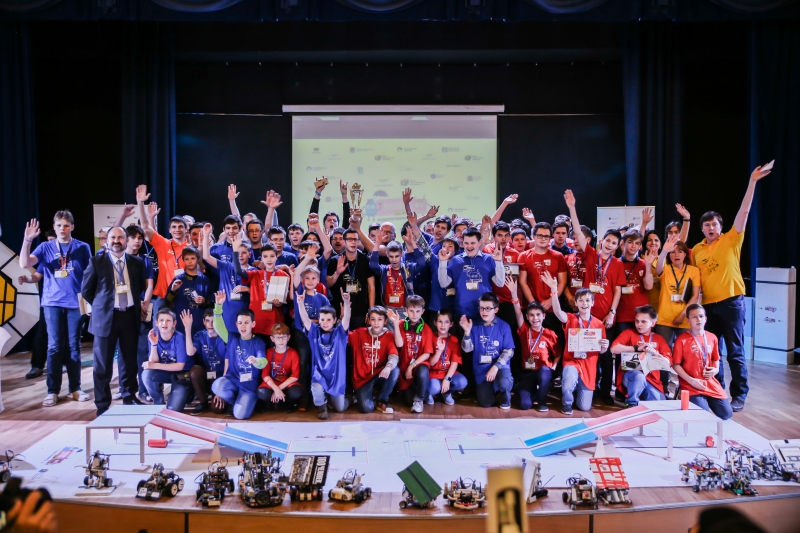 The Tournament was held at School 1329, in Moscow, on May 13 to 14. Teams from Russia’s two capitals competed in four tasks: “King of the Hill”, “Swing Sets”, “Bridges” and “Racing”. The tasks put to the test the engineering and IT-related skills of the schoolchildren – the robots not only had to be built, but also properly programmed to complete their tasks.

“Despite the Tournament’s tight schedule, kids were able to quickly prepare their robots for their assignments. Later, they managed to band together for the final task in just 10 hours. I’ve seen the older ones help the young and the young explain things to the older ones; we all felt the staggering support from the audience during the final stages. I think everyone will agree – the final relay race was spectacular” – confidently said Alexander Negols, who was present as event organizer and ITMO representative, after the final stage had concluded.

The participants were only told the final task’s rules a day before. The relay race, in which the two cities’ teams were to take part in, consisted of elements from the four basic tasks of the Tournament. First, a robot had to set up a series of bridges over “rivers” to allow a “sumo wrestler”-robot to cross. After crossing two bridges and avoiding a fall, the “wrestler” had to climb a mountain and remove one of the obstacles moving back-and-forth horizontally. Moreover, it had to target a particular obstacle. The torch would then pass to racer-robots who had to complete a racing track. When the racers finished, the swing set-robots would start their task. As one robot climbed onto a platform from a swing, another would hold the swing set in an inclined position. The first robot would then have to grab a block from the platform, get down from it and place the block into a marked spot. Only then were all the tasks considered complete.

The players reacted to every failure or success with genuine passion. If a robot was unable to complete a part of the relay race, judges would fine its team by removing a point of their score and then allow them to continue the next task. Even though the teams were given a time limit of seven minutes to complete the tasks, all the teams managed to do that in just three minutes. Both teams were represented by five teams and each team was given two attempts to complete the tasks. All points were then added together. The final competition between the two cities’ select teams proved that robot builders from Moscow and St. Petersburg are each other’s equals in skill.

"The tournament gave the children an opportunity to demonstrate their best professional and personal qualities. At the closing ceremony, judges noted that the players have grown greatly as people in the two days that they spent as a team, and that this was the true purpose of Tournament for Two Capitals" – noted tournament organizer Anna Ogarko.

Awards were given out to teams and individual players. Bronze winners received VR-headsets, silver finalists took home hoverboards and the gold winners were awarded the latest iPad model. In addition, all participants were given certificates that will grant them additional points when applying for admission in ITMO or Moscow Technological University.

“In the first round, as you could see during the online tallying of the results, St. Petersburg won by a slight margin. In the second round the team from Moscow won with a result of over 60 points. We’ve added the results now. With a final score of 104 points and just 4 points ahead of the other team, the winner is the team from St. Petersburg!” – announced Alexander Negols.

The players wearing blue t-shirts accepted the Cup of Two Cities as one whole team. This Cup will remain in St. Petersburg until this autumn, when the second tournament will be held. Perhaps it might move to Moscow if the first one’s winners don’t reaffirm their status as champions. The organizers promised to make the next competition even more exciting, to further flesh out the rules and possibly add a new kind of task.

“The competition was less about robotics as it was about speed: you quickly applied for the tournament, quickly built your new robots according to the rules and quickly adapted to the final task. These are important skills, and we will welcome you as students in our University” – emphasized Anna Veklich, head of ITMO’s Strategic Communications Department.

ITMO.NEWS also spoke to the team trainers about why competitions are important for the players and what they found difficult or enjoyable. “What matters for me as a teacher is that competing in the tournament gives my students a chance to hone their project work skills. Before and during the competition something always goes wrong with the robot: it won’t go where needed or won’t complete its tasks. The kids have to act fast to identify the errors and fix them. When building their robot, they consider not just its structure, but its software as well, so they have to consider all angles.”

“Many factors, external and internal, affect the robot’s behavior on the track. For instance, even the kind of lighting in the room can affect the performance of its visual sensors. We tested our robot in all kinds of environments, adjusted and changed things; we did the same over the course of the competition. In a way, luck matters in these kinds of competitions, as the teams aren’t using the most advanced software. But it’s enough for them right now, as more complex programs require more complex knowledge. They’ll eventually learn these things in university and so on, but what matters now is that they enjoy robotics.” “Building a robot for “Bridges” turned out to be much more complex than we first assumed. It’s a meticulous job that requires patience, attention, hard work and decisiveness. It can be difficult for the children. The surroundings, of course, also affect them – after all, they came all the way to Moscow for the tournament, this is a big thing for them. We first decided to take part in the competition knowing that it would take place at ITMO University – it was an important and prestigious factor for the children.”

Alexey Lakhmenev, teacher at a students’ activity center, trains a team competing in “King of the Hill”.

“What drew me to the Tournament for Two Capitals is how non-trivial and unusual it is. My team and I especially love “King of the Hill” as it requires knowledge not just of robotics, but of tactics, too. When the robots are fighting each other, we need to consider how best to pass an opponent, how to improve our armor and our “pushing” techniques. During preparation we must have spent more time considering our strategy than we did building the robot. Taking part in a tournament was a challenge for the children – they take everything close to heart, which complicates things. Our robot malfunctioned and it took them some time to figure out the reason, but in the end they succeeded.”