Vadim Rybin, a Bachelor's graduate of the Faculty of Photonics and Optical Information, won the national competition of theses called Be First in the Physics and Astronomy category. Now, Vadim is pursuing a Master’s degree. He discussed his thesis and scientific interests with ITMO.NEWS, and also told us how he created the “It’s a trap” student club, whose members are engaged in the study of ion traps. 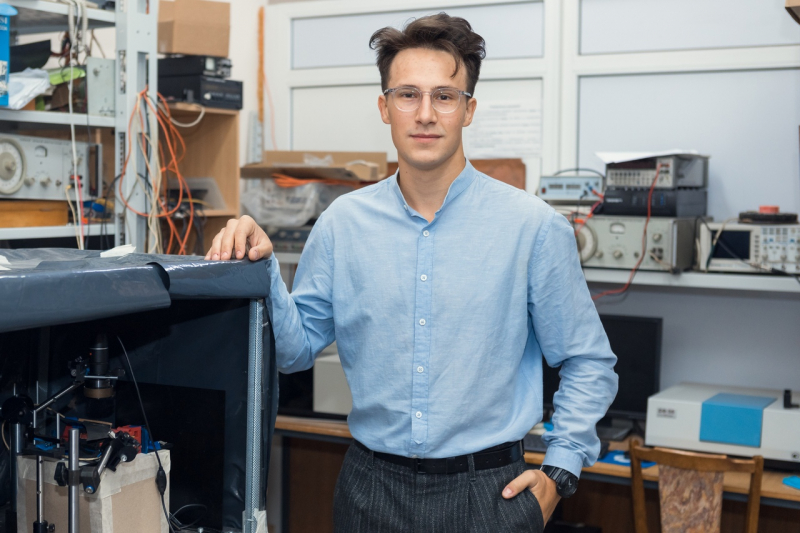 The Be First competition has been held for five years by the Direct-Media publishing house in collaboration with the Antiplagiat company, the University Book journal, and the NEICON company. It accepts papers in 14 subjects, including humanities (philology, history, pedagogy, law, and economics), technical, and natural sciences. In each category, there is only one winner among Bachelor's students and one – among Master's students.

Among the competition’s experts are well-known Russian scientists, professors of leading Russian universities, and experts in each of the 14 scientific fields. The main paper evaluation criteria are relevance, scientific value, and the thoroughness of research, including the quality of the sources used and the ability to correctly apply them.

Vadim, could you tell us how did you join the competition and why did you decide to participate?

I learned about the competition via ISU. It so happened that I didn’t get to the internal R&D competition at ITMO University, so I decided to apply for external competition. For registration, you simply needed to enter your personal data and upload a PDF version of your thesis. I filled out the application form and forgot about it up until August when I received an unexpected email saying that I won.

What is your work about?

The full title of my thesis is Extended Orbits of Charged Microparticles in a Linear Electrodynamic Trap.

My research group and I are engaged in the localization of objects in electrodynamic and optical traps. A linear electrodynamic trap is a device that consists of four cylindrical electrodes (they generate an electric quadrupole field) and two blocking electrodes (they limit the localization area along the trap axis). Charged particles can be localized in such fields. For example, we use microspheres of borosilicate glass, spores, and some other organic objects in our experiments.

Under certain localization conditions, the particle changes its trajectory – from a low-amplitude straight one to a very specific “extended orbit”. In particular, this orbit resembles a rhombus or four-pointed star in the form. The manifestation of such an effect depends both on the characteristics and the particle velocity: under certain power parameters of the trap and in sufficiently strong fields, the particle accelerates to a certain threshold, after which its dynamics becomes turbulent.

Besides, there is a certain line between laminar and turbulent motion, which depends both on the characteristics of the trapped particle and on the parameters of the confining field. This is exactly what I studied in my thesis.

I also proposed a new method for evaluating the characteristics of a localized particle – its mass, size, and charge – depending on the shape of the extended orbit. So, I propose both the method and the device, which I designed myself. There are not so many devices that can determine the characteristics of single micro- and nano-objects avoiding their destruction. So this development of such can be very promising.

The topic of extended orbits is known to the scientific community but has so far been studied very superficially. In general, you can do many interesting things with ion traps: for example, try to implement a quantum processor, engage in mass spectrometry, or improve the frequency standards.

It is used in many areas, and yet the study of extended orbits for some reason is not at all popular. In this regard, our laboratory is not a pioneer – extended orbits, of course, were known before – but we are trying to develop this topic.

Was it your initiative or your supervisor proposed to work on this topic?

I have been studying ion traps and particle localization since the second year of my Bachelor’s studies, but it was my initiative to explore extended orbits. The correlation between the shape of the extended orbit and the characteristics of a localized object is the result of my experiments.

When localizing, for example, borosilicate microspheres – their average size is about 70 microns – orbits are obtained in the form of more rounded rhombuses. On the other hand, when you localize organic objects – spores, the average size of which is about 30 microns – the orbit has a completely different shape, more angular and sharp.

Does it depend on the origin of the particles, their shape, or something else?

That’s why my Master’s thesis will be dedicated to the study of this dependence. According to the theory that I develop in my thesis, the nature and shape of particles are not taken into account. The shape of the orbits is related to size, mass, and charge. Moreover, the ratio of charge to mass as a separate parameter is very important. Based on this data, one can determine the nature of the substance of a localized particle.

Do you research only this topic or some related ones as well?

This year, I have published five papers and only two of them were connected with my thesis.

In our scientific group under the supervision of Professor Yuriy Rozhdestvensky, we are now actively studying the destruction of symmetry in Coulomb structures. When not one but many particles are localized in the trap, they are arranged in a certain ordered structure. It happens because the charged particles interact not only with the trap field but also with each other.

In our works, we also discuss the need to take into account those factors that are associated with the effect of blocking electrodes on the structure of the fields. In the overwhelming majority of domestic and international works, if not all, when describing Coulomb structures in linear traps, only the field of the main linear electrodes is taken into account, and the effect of the field of end-face electrodes is considered insignificant. In fact, this assumption is incorrect.

Historically, this influence is considered insignificant. In our works, we show that even a small field from the end-face electrodes introduces a significant change in the field configuration of the entire trap.

What else is your laboratory engaged in?

In our laboratory at the Center of Information Optical Technology, in addition to the mentioned areas related to extended orbits and Coulomb structures, we are engaged in the localization of micro-objects on a surface electrodynamic trap and in optical tweezers, self-similar dendritic structures, chaos theory, and a number of related and auxiliary disciplines.

My colleagues and I founded the student club “It’s a trap” – the name is a pun, as we work with ion traps. We recently invited about 15 capable and ambitious first-year Bachelor’s students from completely different specializations: computer technology, physics and engineering, laser technology, and even several biologists.

Later on, after certain training, they will continue to work on our tasks and help us in their implementation. We have a lot of ideas, article drafts, unfinished theoretical and experimental works – but we are shorthanded out here.

Moreover, we have a wide range of applied programming tasks in terms of processing experiments and automating some processes. And for this, we need specialists who know, for example, machine learning, which we ourselves are planning to train.

We recruited the first group of talented students at Introduction Days from those who were interested in the field of fundamental physics. So far, our plan is as follows: in the first semester, we will individually teach basic theory, so that they can understand what is happening in general. And in the second semester or a little later, we will gradually involve them in the real tasks of our laboratory and teach academic writing so that they can write articles and publish in well-indexed journals.

Tell us more about your future plans. Do you plan to devote yourself to a scientific career?

Now, I am a Master’s student in Physics and Technology of Nanostructures and plan to work in the laboratory by late autumn. Then, I want to enter a PhD program and start my scientific career. I plan to receive a grant for the further development of the method that I proposed in my thesis. I hope that something more will come out of this than just a thesis.