ITMO university team Desyatochka (Russian for “ten”) became the winner of the Robotics Hackathon in Ufa and team ITMO-1 received a special award in the Interesting Solution category. Learn more about the participants’ preparation, winning strategies, and future plans in this ITMO.NEWS article. 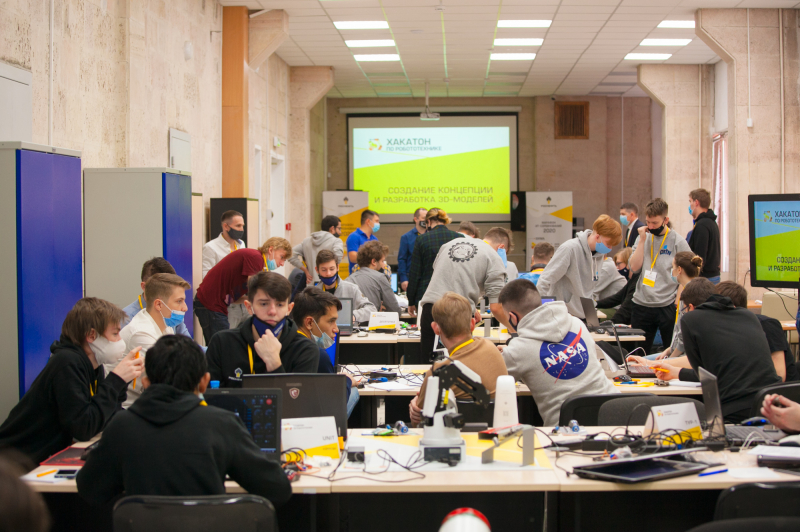 The Robotics Hackathon, organized by Rosneft, was held in Ufa on October 16-17. Its main goal was to find new approaches to solving production problems using robots and robotic models, as well as to develop robotics and promote it among students of Russian universities.

Under a short time limit, the participants had to model a robotic gripper for a four-axis robotic arm used for disassembling technological equipment, and print it out on a 3D printer. The organizers provided the participants with all the equipment necessary to complete the task: the PICASO Designer X PRO 3D printer and the DOBOT Magician robotic arm.

The solutions developed by the teams can improve the safety of production processes and facilitate equipment maintenance. ITMO.Hack assisted in training the teams for the competition.

“ITMO.Hack finds the most interesting hackathons for our students and conducts an internal selection. The robotics hackathon is something new for us. Students had to solve a narrow-profile tech task and we wanted to ensure that the participants of the Ufa hackathon had no organizational problems to fully focus on solving the challenge. There are two key values that help you win a hackathon: a close-knit team and a clear, balanced approach to solving the problem,” comments Kirill Plugin, head of ITMO.Hack. “Winning a hackathon often means that a student team is on the right track: they test their ideas and receive positive feedback on the proposed solutions. It is important to understand that victory is not the ultimate goal, it is just one step to bringing the product on the market and implementing a unique idea in a complex technological process.”

The hackathon received more than 120 applications: 46 people or 12 teams made it through the selection to the offline hackathon. There were also two teams from ITMO University: Desyatochka (Alexander Dupak, third-year student at the Faculty of Control Systems and Robotics, and Nikolay Dupak, third-year student of the Information Technologies and Programming Faculty) and a Faculty of Control Systems and Robotics’s team ITMO-1 (Valeriy Chernov, fourth year, Artem Egorov, fourth year, Artem Myshlyaev, second year, and Alexander Smekhnov, second year).

As a result, the team of ITMO University Desyatochka took first place and ITMO-1 received a special award for the Best Interesting Solution.

In this article, the winners share two completely different approaches to solving the problem of the hackathon, which led them to success.

third-year student at the Faculty of Control Systems and Robotics

In general, I enjoy taking part in various events related to my field. I learned about this hackathon from the university's newsfeed and submitted an application just a few hours before the actual deadline. I turned to my brother for help because I was running out of time.

There are a lot of hackathons in programming associated with neural networks, machine learning, and artificial intelligence. But I'm more interested in design and modeling. I think it is more about practice than code.

On the task and challenges of the hackathon

The task was interesting yet specific, but there were also some challenges. We had to work a lot. On the first day, we had to model everything in such detail so as not to redo it on the second day.

From 8 am to 8 pm, we worked on the gripper and then started printing. It lasted for about 14 hours. So, if our model had had some defects, we would not be able to print it twice. We made a gripper consisting of two non-parallel claws connected by gears. It was not bulky and printable.

This is not the first time I participated in such an event and I know that the main thing is to do a simple, reliable model that actually works. And we succeeded in it. As soon as we learned the problem, we thought it over and came up with the best solution, which we stick to throughout the hackathon. If you focus on creating something beautiful, you may simply just not have enough time to do it.

We had some experiences, followed one idea, and did not focus too much on what’s not necessary – that is how we won the competition. And we were close to missing the deadline. In real life, it makes sense to come up with something unusual, complex and spend a lot of time on it, but at a hackathon, when there is a day and a half for everything, it is simply impossible. But, even though we did not work out our design initially, I think it still looks pretty cute.

Hackathon solutions are rather a single task. They help you see what can be done in a short time. Perhaps some parts will be used in other projects, but not the whole model. Further on, I want to focus on other projects and participate in other competitions and new hackathons, because winning is good for the portfolio and experience.

fourth-year student at the Faculty of Control Systems and Robotics

Due to the current situation, there is a shortage of offline events, and an engineering hackathon needs to be held offline. There is just no other way to model something. We decided not to miss the opportunity, because we have to keep ourselves in good shape and attend such events.

Tasks and features of the hackathon

This hackathon turned out to be unique. Firstly, because of the host city, secondly, it was in robotics, which is rather strange, and thirdly, it was organized by Rosneft, a company that is not associated with this field. We were asked to make a solution for a small training robot arm. The problem is that industrial robots and cranes can do this job better and cheaper. That’s why, I think, this concept is impracticable for enterprises.

So, we decided to just have fun with it. The original solution implied a mechanism with two degrees of freedom of the grip, which seemed to us to be very unprofitable and unstable with the existing two weak and one strong engines. So we switched to one yet powerful engine.

The result is a mechanism that, if the engine fails, would not drop the turbine it captured. It did not fall down under its own weight when it was turned off. On the first day, for about six hours, we tried to come up with a design, did the geometric analysis, thought about mechanisms and machines, almost started generating the mechanism along the trajectory, but stopped. In general, we had theoretical knowledge that we used to the fullest. In terms of theory, we were definitely the leaders.

We could’ve made something less complex, but then it is actually easier to buy an industrial crane traveling on rails. It would have also been cheaper. But for some reason, people who do yoga get up in the morning, lay their carpet on the floor, and practice. We might think that all this is not needed, you can just go to the kitchen and make some tea. And the same goes here. It is necessary to keep yourself in good shape, and to do so you need to come to such events from time to time. We do this kind of high-tech yoga when we develop our detailed solutions.

We used the knowledge about the center of mass, momentum, the Coriolis force, stability failures, and so on in order to make a very strange, non-obvious and yet functioning solution. Its two main advantages are reducing the cost of the product due to the fact that we use one engine and its reliability. Even if the engine fails, which sometimes happens, the turbine will not fall off the robot. It is a very secure solution.

The secret of success

Our love of mathematics helped us win the prize. An important point in designing something new is analysis, and we like thinking and analyzing. Also, there were four of us, and everyone's a little different. For example, someone loves mathematics more, someone less, everyone has different competencies. At the same time, we all coexist, so mutual respect is very important for us.

It's great to see robotics events held, and even Rosneft has joined. This is good because the robotics market in Russia is quite small compared to such giants as Germany, China, Singapore, and South Korea. I think that it’s important to develop academic mobility within the country, too. So it’s nice that this hackathon was in Ufa. I had no complaints about the event’s organization.

Now we will be engaged in internal projects on various topics. We plan to prepare for competitions, which will take place in a year, and continue the educational courses that we teach.

The hackathon was part of the Rosneft IT marathon. The results of its final stage round – the international Rosneft Proppant Check Challenge hackathon, which has been running since September – will be announced in Moscow on November 28. The awards ceremony for winners of all three hackathons will also take place there.