To accept the challenges of the 21st century, to remain open to the most outlandish ideas, to share their last bitcoin with their friends and to try not to hack Pentagon without a good reason – these are the promises made by the thousands of first-year students of the “first non-classical” as they began the new academic year at ITMO University. The massive open-air event unfolded on a square in front of the “Baltiyskiy Dom” theatre in Alexandrovskiy Park. There, ITMO University’s new students learned about the new opportunities provided to them by the university, raced against each other, played tug-of-war with an enormous USB cable and took part in raffles. As per tradition, they sealed a “Memory Stick” with their messages which will be read out in six years on their graduation day. 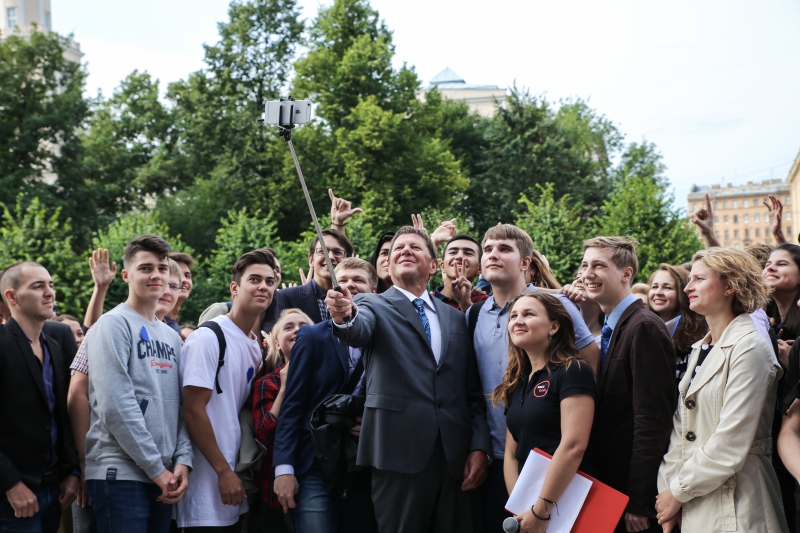 READY! STEADY! GO! These are the words that started the event that welcomed first-year Bachelor’s, Master’s, postgraduate and vocational education students into the ITMO.FAMILY – a community of students, professors, employees, alumni, partners and friends of the university.

As Rector Vladimir Vasilyev noted, this year the university will open its doors to 4,500 new students. They have all passed a strict selection process: as per the results of the admission campaign, ITMO University is one of the top 5 Russian universities in terms of the average Unified State Exam points among entrants. This year’s Master’s students come from more than 300 higher education institutions of Russia and the world; postgraduate students, too, have completed challenging tests to be accepted. Just like ITMO University’s graduation events, this celebration was held in an open-air format. While welcoming the newcomers, Prof. Vasilyev noted that everything, starting with the events and holidays and ending with the educational activities, reflects the university’s primary values – liveliness, transparency and the focus on collaborative work.

“There’s a reason we call ourselves the “first non-classical”. And the format of this event also goes to show that ITMO University is more than a university. Here, we are forbidden from saying the words “educational services”. We don’t service anyone here, we collaborate – students, professors, the rector, vice rectors and so on. Today, you all become equal participants in this process,” – said ITMO University’s Rector. Vladimir Vasilyev brought up the four main qualities of the university. First off, ITMO University is a global, international university. One out of six students here is a representative of one of the foreign universities that are ITMO University’s close partners and collaborators. Approximately 200 professors and scientists from foreign universities and research centers work at ITMO. In addition to prolific research activity, small innovative enterprises and startups are set up at the university. And, lastly, the university is a person-focused one, meaning that everyone, from Bachelor’s students to heads of faculties can fully explore their creative potential. The freshmen were congratulated by successful alumni of the university and some of their own, such as: Alexander Batalin, a student of the university’s Faculty of Secondary Vocational Education; Daniil Utkin, one of Russia’s top applicants who achieved the 300-points maximum on his Unified State Exams and is now a student at ITMO; Maxim Alexeev, first-year Master’s student; Andrey Nikolaev, first-year postgraduate student and Petr Georgiev, a first-year student from Bulgaria who spoke on behalf of international students. The former applicants swore the ceremonial first-year student’s oath, in which they promised to respond to the challenges of the 21st century and to remain open to ideas no matter how strange they might appear. Then they sealed the traditional “Memory Stick” – a special box in the shape of a USB drive filled with letters to their future selves, which they will get to read again in six years. For the duration of the event, a large interactive zone was set up in Alexandrovsky park, where guests could experience driving “behind the wheel” of a Formula 1 car and entertain themselves by tugging a giant USB cord. Info-zones were also available for the university’s Master’s and postgraduate programs, as well as creative laboratories by FabLab and OLIMP. At the ITMO.STUDENTS booth, newcomers to the university could learn about student projects, clubs, careers and opportunities that are open to ITMO’s first-year students. Everyone was also free to test their luck by filling out a form to take part in a raffle – winners took home ITMO-brand USB drives, portable chargers and hoodies. However, no student left the event empty-handed. In the “mega-student starter pack” that was given to all first-year student in attendance, one could find everything they would need in the first days of their education: a copy-book, a card with a link to the Freshman Guide to ITMO on it, a pixelated heart-shaped pin – which many wore immediately – and a branded fidget spinner. What is ISU? How do scholarships and transportation cards work? What creative opportunities are there for ITMO’s students? All these and other questions were answered in the F.A.Q booth. Those who had already gotten to know the university could entertain themselves at the Interactive Zone by playing the Guitar Hero and Dance Hero videogames or testing their mettle at the KronBars training ground. There, the most courageous new students did pull-ups, played basketball, air hockey and tried their hand at various exercise machines. Anyone interested could receive a club member’s card and sign up for a sports club. Those who like singing by the fire could come by the outdoor club’s booth. At the ITMO.STORE, visitors could buy branded ITMO sweatshirts and many other kinds of souvenirs. I participated in the “ITMO VK” Olympiad, where I did well in two subjects – computer science and the English language, which provided me with additional points when I applied. I think things worked out great, especially since I also got great results in the Open Olympiad in Computer Science. All this gave me what I needed to get accepted at the CT Department. Not I just have to not get expelled, which is why I plan to really get into studies soon; after all, the education process there is very demanding. But I’m interested in developing myself in other areas, too: for instance, I’m into video filming and editing. I hope that at ITMO I’ll get a chance to prove myself in that area, too. Maria Ryabina: I’m from Moscow, but I decided to go to university here, in St. Petersburg, at ITMO University. I think this is a very advanced university and I also like the city – I’ve found love here.

Daniil Gusev: And I’m from Chelyabinsk – I managed to get accepted to ITMO University thanks to the South Ural Olympiad “Svezda”. Why computer technologies in design? Jony Ive, the chief design officer at Apple, is quite of age already, so I hope to be his replacement when I graduate – someone’s got to keep making those iPhones. Jokes aside, I think I’ll keep trying out different areas of study and will start working in my first year. It’s also really interesting to take part in various internships, and I think ITMO University offers a lot of opportunities that will help me realize my potential.

Nikita Bagno, enrolled at the Faculty of Information Security and Computer Technologies I’d heard about ITMO University when I was in school and decided to apply here. Why? It was a conscious choice. I’m a perfectionist and I want everything in my life to be the best, including my university. I took part in the “ITMO VK” Olympiad, where I performed well in the English category and thus got 10 additional points for my application. I think that helped. But I wouldn’t want to get into languages professionally – it’s more of a useful addition to a career in IT. At the university I’ll be able to see my priorities clearly and develop myself in a particular field.

Valeria Tikhonova and Elena Eliseeva, enrolled at “Computer Science and Computational Technology” and the Faculty of Infocommunication Technologies We’re both from Yoshkar-Ola; we went to the same school and decided to apply to the same university. First off, this is the coolest programming university and, of course, the first non-classical. We found out about it some years ago from friends and teachers. Some of our friends from Yoshkar-Ola study here, too, and they’d always told us: “It’s cool here, you should apply”. We got into programming in school; we go to an IT-focused lyceum and were always interested in writing software, solving tasks and creating our own things. We plan to apply to Master’s programs, too – we don’t yet know which ones, but we’ll find that out while we study here. I’m from the Krasnoyarsk Krai; I found out about the university and my faculty back in the eighth grade, and since then I’ve been taking part in ITMO University’s Open Olympiad in IT. Finally, in grade 11 I found myself among the winners. ITMO University is one of the best programming universities, but I also really liked the atmosphere here – it’s different from other universities and I like that. Right now I’m getting to know the city. Hopefully I’ll soon meet my groupmates and find some friends.

Kirill Chirkov, enrolled at Faculty of Control Systems and Robotics I learned about the university gradually – first my friends told me about it, then Istarted to find things out myself and realized that it really is an advanced university. I already have a number of projects of my own that I’m working on, for instance, I make pins using a laser cutter. It helps me earn some money – I’ve already saved up enough for a holiday trip. As for further plans – I don’t have a lot of skills right now, but ITMO University bills itself as an open, entrepreneurial university with a lot of opportunities and areas for self-development. Hopefully my studies at the university will help me move forward.