The 2019/20 academic year marks a landmark point in our University’s history as we celebrate ITMO’s 120th anniversary of founding. Students, staff, and friends of the University can expect a variety of exciting events – competitions, workshops, meetups, and more – throughout the year. In this article, we take a look at everything to look forward to in the 2019/20 academic year. 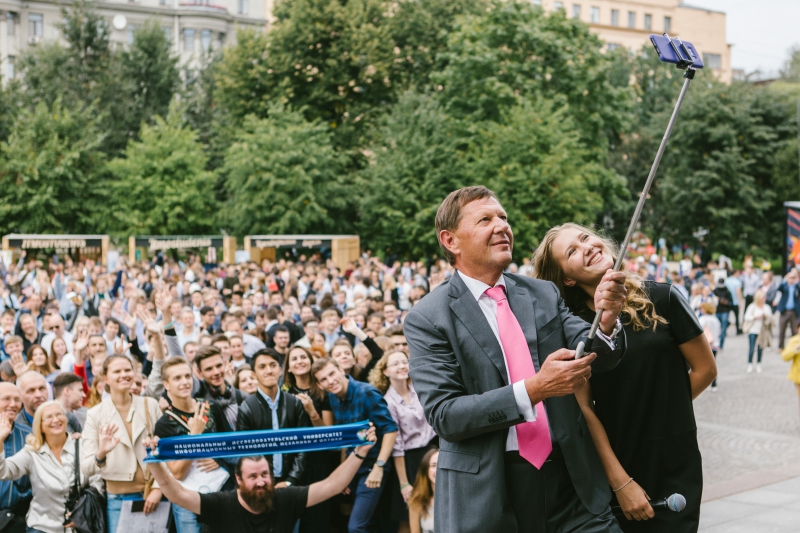 For the first two days of studies, instead of attending classes the students will take part in a quest that will take them through themed areas dedicated to the many aspects of being an ITMO student. There, they will:

At 1 PM, first-year students of Bachelor’s, Master’s, and PhD programs will gather in St. Petersburg’s Alexandrovsky Park to officially become part of ITMO.FAMILY – a community of students, professors, staff, alumni, partners, and friends of the University.

At ITMO.GO, newcomers will learn more about the opportunities offered to them by the University, enjoy fun activities and stage performances, meet Rector Vladimir Vasilyev, and receive their student IDs.

As part of the University’s long-standing tradition, students, staff, and alumni will gather for a bicycle ride through some of St. Petersburg most picturesque spots. As usual, the route will start at Primorsky Victory Park (near Krestovsky Ostrov metro station) and end in the 300th Anniversary of St. Petersburg Park. Participants can bring their own mode of transportation or rent one from nearby vendors who offer discounts to ITMO students and staff.

The Donor Day is a regular event at ITMO University that provides students and staff with the opportunity to help others by donating blood. Additional information will be made available here in the run-up to the event. Participants are required to bring their passport; dormitory residents need to provide a certificate from an infectious disease specialist.

ITMO University’s very own Yagodnoe Sports & Leisure Camp is hosting a meetup for hiking, sports, and outdoor-living enthusiasts. This year’s meetup is all about 120: participants will compete in 120-meter kayak and raft contests, take part in a 120-person distance run, and sing 120 songs around the campfire.

Other activities will include workshops, contests, night orienteering, climbing, and much more. Participation is open to students, alumni, their friends and family members; a link to the sign-up form will be made available here.

This academic year, 120 students of ITMO University will participate in a series of 48-hour hackathons where they will be tasked with developing their ideas into full-fledged prototypes. These projects will then be presented to the University’s partners and companies of ITMO alumni.

Participants may enter with their own projects and teams or join other teams and develop their ideas on the go. A link to the event’s sign-up form will be made available here.

The OTRYV (“Hair Down”) Rock Festival is organized by ITMO University’s rock music club and is a mainstay of each academic year’s event lineup. On the occasion of the University’s 120th anniversary, rock bands made up of students and alumni will compete for the audience’s love – and valuable prizes.

ITMO University recognizes the importance of personal and interpersonal skills in 21st century education and has introduced a general set of soft skills disciplines for all Bachelor’s students last year. Prof. Kurushkin will take a light-hearted look at this oft-misunderstood concept and the challenges of translating it into Russian.

Next April, ITMO University will host the Malibu Beach-themed final stage of its “Fort Boyard”-inspired citywide adventure quest. Teams of 3 to 5 members will tackle hundreds of sports, intellectual, and creative challenges and compete for special prizes and titles. Sign up here.

ITMO University’s science stand-up comedy show returns for its fourth installment at Tantsploshchadka Club. Quantum Potential will see masters of Big Data, photonics, and IT shine a humorous light on science. This is no boring lecture – it’s a whole new take on science communication.

Yagodnoe Meetup is a special outdoors event for all ITMO graduates. This is an opportunity to gather ‘round the campfire, share stories, and relive one’s student years.

A link to the event’s sign-up form will become available here closer to the date of the event.

The 2019/20 academic year will see the graduation event’s traditional Peter and Paul Fortress venue changed to Sibur Arena, a major sporting and entertainment arena on Krestovsky Island, near Primorsky Victory Park and Gazprom Arena stadium. During the official ceremony, graduates of Bachelor’s and Master’s programs will receive their diplomas, while the alumni of previous years will reunite with their peers. Of course, the event is open to not only students and staff of ITMO University, but their friends and close ones, as well; sign up for ITMO.LiVE today!