On 16-20 October, Kronbars, ITMO University’s student sports club together with the Federal Agency for Youth Affairs and the Association of Student Sports Clubs of Russia (ASSC) organized “St. Petersburg Games 2019”, a national student club tournament. The even brought together 12 teams from all over Russia: from Ulan-Ude to Volgograd. 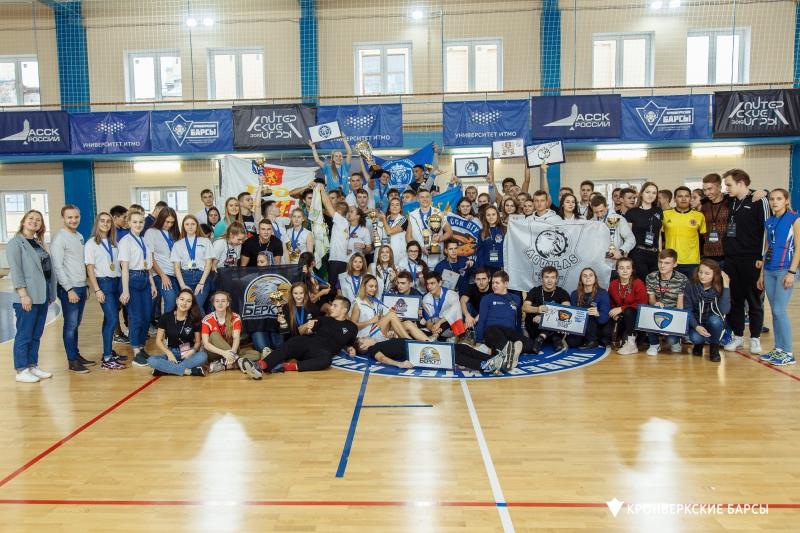 It was the third time Kronbars organized this tournament. The opening ceremony where the participants presented their clubs was held at the restaurant of the “Oktiabrskaya” hotel.

After the team parade at the “Bars Arena” sports center, the actual tournament started with contests in 3x3 basketball and table tennis. At that very time at the relay race and the “ASSC Exam” took place at the “Yunost” swimming pool.

Sports were not the only thing the participants were tested on, however, as an intellectual quiz with tricky sport-related questions was held on one of the evenings. The “Alyans” student club of Moscow Technological University (MIREA) won this battle.


Apart from that, the tournament included an educational program. Among the speakers were Evgenia Bychkova, executive director of ASSC, Evgeny Raskin, head of Kronbars, and Mikhail Bedjanan, federal coach of the Coach Association of the Russian Youth Union. During the case-session, the teams shared their experiences and their best practices at work.

Kronbars came up with a traditionally St. Petersburg cultural program: a Zenit-Rostov football game at Gazprom Arena, a trip down the Neva River and a visit to one of the most fashionable night clubs at the heart of the city.
The cup of this year’s “St. Petersburg Games” went to Siberia – “Legioner” from the Krasnoyarsk Institute of Railway Transport had the best performance becoming the breakthrough of the tournament. The “Grifony” club from the Crimea came in second and third place was taken by “Tolpar” from Ufa.

During the tournament, we asked the participants about what inspires them on a daily basis and what was it that they got to learn in St. Petersburg this time.
Konstantin Trelyov, head of the “Legioner” sports club:

Our club has been running for less than a year, we created it in February. The most important thing now is to keep growing. Naturally, I want more and more people to hear about us not only in Krasnoyarsk but beyond. And “St. Petersburg Games” gave us a headstart in that direction.

First of all, we have to organize the work at our club. Then we have to make a plan for the future. Our media department has to function properly to let people know who we are and what we do. We saw the way other student sports club work and took in experience, now we are ready to move towards that level.
Anna Konovalenkova, head of the “Baikal wolfs” sports club (Ulan-Ude, Buryatia):

Difficulties occur when we need to make and send documents or apply for trips. You have to do everything two times faster because you have to set off soon. But in the era of the Internet, it is not that difficult to cooperate with our colleagues. There are no boundaries for sports. Especially when you love your job and the people you work with inspire and support you.
Ulyana Surovtseva, head of the "Lobachevsky" sports club press center:

We love what we do. We actually enjoy the process and that is why we always try to find new solutions, come up with a different way to attract the audience. We learn from professionals: keeping up with other clubs, professional leagues and international projects and follow their example.

We attend forums and lectures, take part in conferences. We get new inspiration and work some more to achieve our main goal: promoting student sports at our university, in our city and in our country.
Back to top